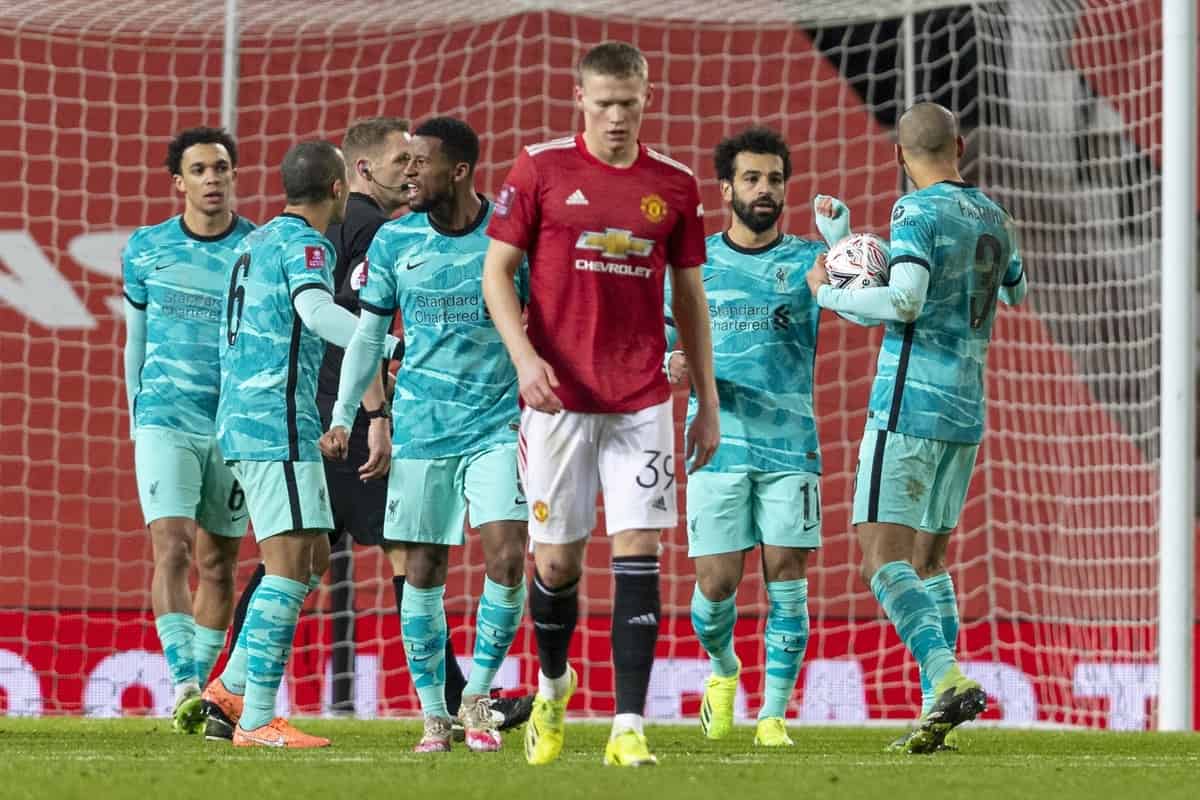 An improved Liverpool lost 3-2 away to Man United in the FA Cup fourth round on Sunday, as the Reds’ poor run of results continues.

Jurgen Klopp‘s side took on their biggest foes for the second time in a week, with a place in the fifth round up for grabs.

Mohamed Salah regained his scoring touch with a peach of an opener, finishing past Dean Henderson after a lovely pass from Roberto Firmino.

Unfortunately, United were level soon after, as Mason Greenwood buried a similarly ruthless effort on the break, having been found expertly by Marcus Rashford.

Rashford then put the hosts ahead after a bad error from the struggling Rhys Williams, before Salah equalised with a well-taken effort.

Substitute Bruno Fernandes sent Liverpool packing with a free-kick 12 minutes from time, on another disappointing day for the Merseysiders.

There was misery on show, but also positivity regarding the performance…

I can take going out the FA cup. Something I’ve come a custom to in recent years. I can’t take losing to Utd EVER that’s just from birth. But it is what it is. All round a much much better performance from us which is the one consolation I can take from the game.

At least I wasn’t disgusted with the performance

Better performances than recently but poor defensive decisions cost us massively today. We had the chances to win and was the better side in my opinion. Game won by a stat padder from a very dubious foul #LFC

“Not overly bothered by the result, I thought we got our hunger back.”

“Overall, I think the lads did well. We got a couple of goals in which is a confidence booster. It should help us, when we play against Spurs. It was a great spirited display from the lads. It is positive, even though it was not the result we were hoping for, does that make sense?”

Played fairly well #LFC, but not well enough to win, and it’s no consolation anyway when defeat knocks you out of the #FACup

Well, that was better at least, tbh. Can't really be that bothered about the FA Cup, tbh, but we controlled the game for large spells dominating territory, and scored 2 goals. That's not too bad, recent games considered.

A much improved performance there from Liverpool. A creative spark, which has been lacking, the main positive. Not at all devastated to be out of the cup, but it was a game continued to showcase the need for a CB.

When things have been as bad as they have, you have to take positives. Liverpool were much better for large swathes of that than the absolute dross they’ve served up lately.

It’s just not good enough from Rhys Williams. Whether you’re 18 or 28, that should be bread and butter for a defender. It’s poor.

Bollocks. Better but still not enough.
No surprise our attack looked better in the wide open spaces of OT, but defensively we're still not right.
I felt for Rhys Williams, but he was out of his depth tonight. If that was Rafa we'd say his selection was sending a message to FSG..

“Rhys was a gamble that didn’t pay off, would prefer Gini there.”

Really feel for Rhys Williams, he’s a kid learning his trade and possibly just not quite ready for this level yet, but it’s not his fault and he’s trying his best to step up and he will get there eventually. Really think before you give out any abuse as we’ve all been there.

A mistake by Rhys Williams will get highlighted but to blame him is unfair. He’s a young lad who would never have imagined being in this position. The people who run Liverpool knew in November how the manager needed a central defender. Until it’s addressed, there’ll be more bumps

Improvement from Liverpool, but undone by defensive frailties. Have to feel for Rhys Williams. Thrown into the deep end this season. Shouldn’t be having to rely on a 19-year-old at this level.

Salah back amongst the goals & some more “promising” attacking play.

Thiago gets more minutes, but defensively I’ve watched the same game for the past 2 months. #LFC

Take the positives and move on to Spurs. Trent and Firmino better tonight. Salah goals will have done him some good. Will hopefully have Matip at CB and Henderson in midfield for Thursday.

“Best performance in recent weeks, Salah and Firmino back to their best.”

Hard to pick good performers today, suppose one positive thing was Firmino was better today and Salah got a couple of goals

And attention turned to Tottenham away on Thursday…

Oh well. Only the FA Cup.

Much improved performance overall, but if you're carrying a young player, you're always going to struggle (buy a centre-back).

Onto Spurs, which is 10 times more important.

Liverpool are out of the cup. Some positives to be taken from the game but also many disappointments. Massive game against Spurs Thursday

Thought we played better. More ideas, more belief, more effort and much more energy. Silly mistakes cost us. Hopefully the boys can kick on and get the 3 points vs Spurs. Extremely negligent to not buy a CB in the summer, suicidal not to buy this month.

Another setback. Another boost for United. Never good.

Bring on Spurs with Matip & hopefully Hendo on the side

Matip back against Spurs will make a big difference. Hopefully Henderson too. Front 3 were linking up better. Firmino creating again, Mo using his right foot and scoring goals! TAA overlapping again. Positive signs given rookies in the team.

Take the positives and move on to Spurs. Trent and Firmino better tonight. Salah goals will have done him some good. Will hopefully have Matip at CB and Henderson in midfield for Thursday.