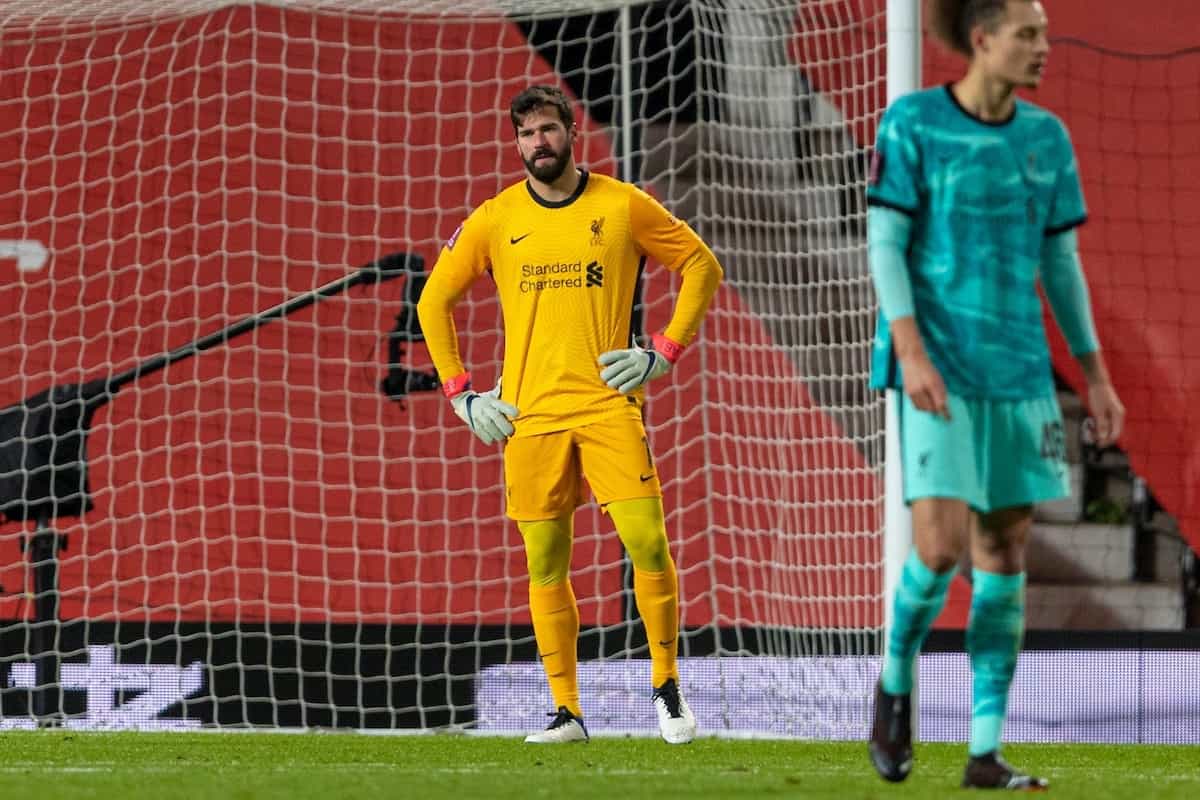 Liverpool are out of the FA Cup after a 3-2 defeat to Manchester United at Old Trafford on Sunday as the winless run rolls on.

Hits and misses with rotations and returns 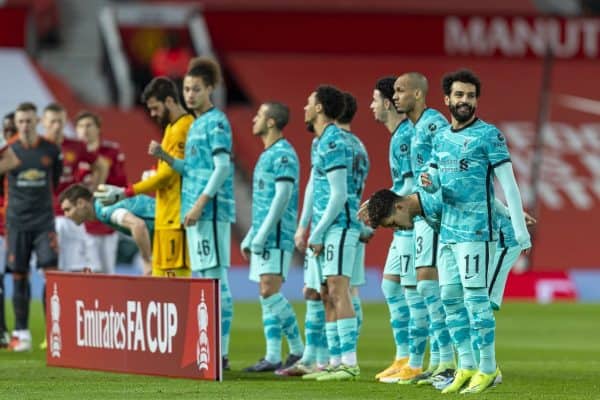 James Milner, Rhys Williams, Curtis Jones – those were the three names in the line-up who could be termed rotations, or being given their chance.

Mixed results were served up. Jones was decent at times, peripheral at others. Williams didn’t do well – more on that in a bit.

As for Milner, he was alternately way off the pace and the catalyst for us trying to win the game – driving us forward, getting caught out of position, firing over a great chance, cleverly creating Salah’s second, tackling and creating overloads and then not having the pace to do anything about it.

It was a very Milner showing, all things told – just what he’s in the team for on the ball, and just what we have to allow for off it.

Huzzah! It was a moment to cherish, yet the players only seemed to react in pretty angry fashion – with themselves or recent struggles, no doubt – when Mo clipped a beauty over Dean Henderson and into the net.

Other than the four against Villa which were scored against kids, it was a first goal in 456 minutes netted past what we might term a senior side.

The lead didn’t last too long, but it was a real pleasure to see an actual opening fashioned through a neat pass, a clever run…and to see it taken, of course.

A second for Salah was a bonus and it looked for a period as though the Reds were the more likely to win, but too few other players ever really looked capable of scoring.

Rhys and the rest

Here was perhaps the first 90-minute long showing of where Liverpool are struggling without a consistent back line.

There’s no point in skirting around the issue – Rhys Williams had a bit of a shocker. He jumped into tackles he couldn’t win because he knew he didn’t have the pace to get back from so high upfield, and erred when trying to cut the ball out for United’s second.

As commendable as his performances were against Spurs and Atalanta, here he was naive and caught out – which is understandable given his age.

Alisson had far from the greatest game of his life, beaten with three similar finishes into the far corners, and his playing out put us under pressure a couple of times.

Fabinho was unusually erratic and the cover from the 8s in the channels wasn’t always there – particularly obvious when Liverpool didn’t start with a normal three-man midfield.

These are all knock-on effects of the ongoing chopping and changing we’re being forced into, which were bound to catch up with the defensive work eventually. Here, they’ve cost a place in the last 16.

It’s not always about the 90 minutes on show and this needs a wider-lens view.

Liverpool have now won one game in seven across all competitions, and that was against children.

The Palace game, our last ‘real’ win, was a long time ago now and there’s a very real need to accept the reality and stop the rot – we’ve lost three of five, not just not won them.

Perhaps we saw the first signs of how in the early stages.

Firmino was excellent with his link play this time – two assists on the day – in part because he worked hard and in part because he had support which was on the run. Two in attack through the middle gave United problems (although it also did to the Reds, when they countered our right flank).

Maybe that’s a stepping stone to how we’ll need to line up for now, tilting the balance back towards the attack rather than being solid, just to fire and bludgeon our way back to winning ways.

So the season boils down to the league and the Champions League.

Next up is Spurs, which has quickly become a match which might define what the next few months look like: will we be looking up at the top couple from Manchester and trying to play catch-up?

Or will we be looking at Leicester, Spurs, possibly Everton and maybe even West Ham – all could be ahead of the Reds by Thursday night – and trying to play catch-up…for the top four?

This, against United, was an improved showing. It wasn’t a great showing, but it was better, with individual components to pick out and look to repeat.

But there’s a lack of confidence still with some in attack and far too many questions at the back. Come Thursday in north London, Liverpool dare not let Spurs score first.