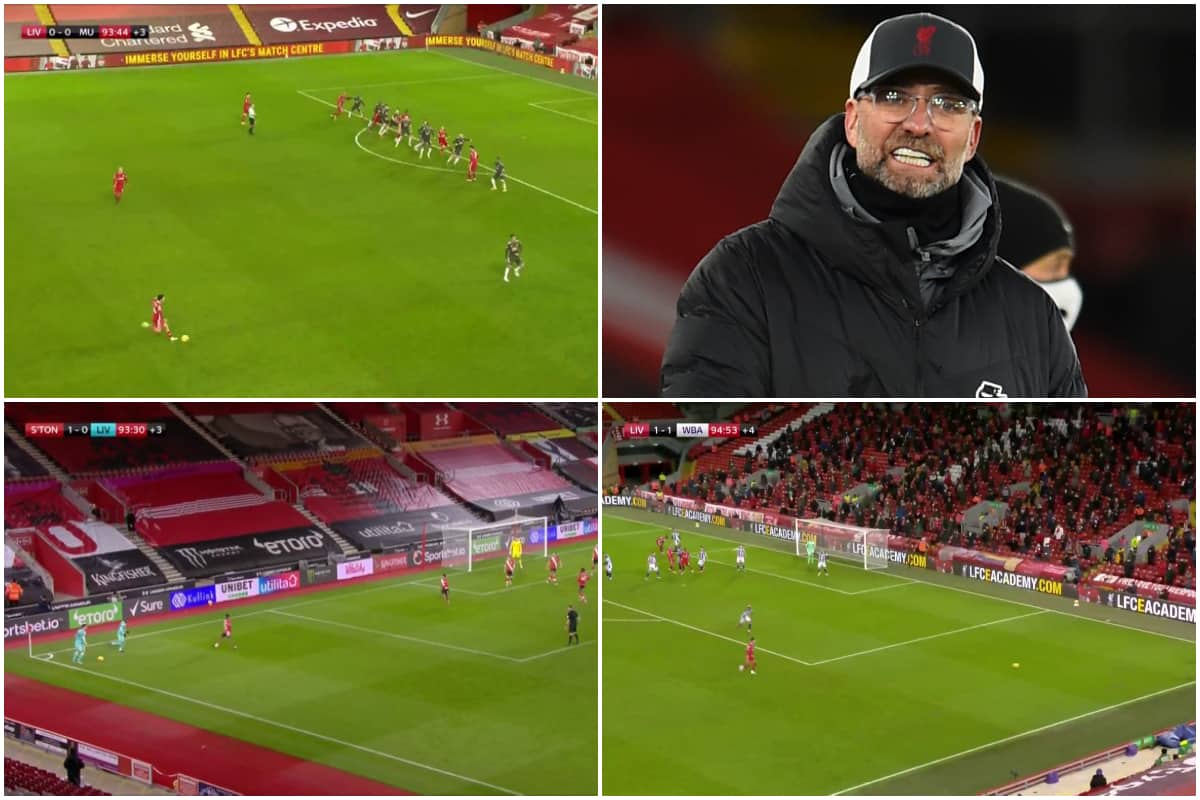 A set-piece, in the last minute of a game, with Liverpool facing either a draw or defeat…and it goes short, not into the box. It is a situation that has flummoxed fans.

The Reds are in the midst of a frustrating run of results that has derailed their Premier League title defence approaching the halfway stage.

Without a victory in four games, Jurgen Klopp‘s side have drawn with West Brom, Newcastle and Man United and suffered a 1-0 defeat to Southampton, with Sunday’s 0-0 with United prompting a drop down the table.

United had already taken top spot with a 1-0 win over Burnley in midweek, but now three points for both Man City and Leicester have seen Liverpool drop from second to fourth.

To make matters worse, sixth-placed Everton have a game in hand and are only two points behind, while Tottenham are only a point off the champions ahead of their meeting on January 28 – albeit with the Reds to play Burnley next on Thursday night.

Liverpool have not been comprehensively beaten in any of their last four outings, not by any stretch, with two 0-0s, a 1-1 and a 1-0 evidence that fine margins are at play, and the lack of a finishing touch has been the clear problem throughout.

Therefore, it is glaring that in three of their four winless games, the Reds have been handed a big opportunity late on through a set-piece only to squander it by opting for a short delivery.

This was highlighted by Liverpool writer Josh Williams, who pointed out wasted situations – beyond the minimum amount of stoppage time – against West Brom, Southampton and United:

Strange development across three of Liverpool's past four winless games. Set-pieces gained in the 95th, 94th and 94th minute, all played short.

The ball failed to arrive in the penalty box before the final whistle was blown for two of them. pic.twitter.com/C8FRaNwMAb

Williams is not alone in sharing his frustration at this, with a host of supporters and journalists questioning the approach on Twitter after the game:

Just one other point I want to make. 3 times now Liverpool have had chances to pump balls into the box in the dying seconds of a game, 2 corners in previous games played short til the whistle went and tonight a free kick played sideways til the final whistle!

Third game running we play a last-second chance to get the ball into the box short. Players not thinking properly. But don't mind a point with two midfielders in the heart of the defence. Get Matip back, and look to build again.

Someone needs a word about how we finish games

Short corners and short free kicks can fuck right off

Liverpool are KILLING ME with short corners and these free kicks are the end of the game! Just get it in the bloody box ?

You should be booked for time wasting if you take a short set piece when in need of a goal during the dying minutes.

There is, of course, an obvious explanation for this, with Liverpool suffering from a lack of height in the absence of their regular centre-back options, namely Virgil van Dijk and Joel Matip.

It should be noted, though, that against both West Brom, the Reds had the six-foot-plus Fabinho, Jordan Henderson, Rhys Williams and Divock Origi on the pitch, while against United there were Fabinho, Henderson, Origi and Curtis Jones.

Furthermore, the delivery of Trent Alexander-Arnold, Andy Robertson and in particular Xherdan Shaqiri is arguably maximised from long range.

One corner from Shaqiri on Sunday, whipped onto the goalline, caused United a real problem that could have been exploited more often, as even with a supposed lack of height it is a gamble worth taking in stoppage time.

In the past, Klopp has praised his backroom staff, and assistant Peter Krawietz in particular, for their creativity in devising goals from set-pieces.

But now it appears as though a lack of invention, or perhaps simply common sense, has deprived Liverpool the prospect of late, late chances that could have turned a point into three, or zero into one.