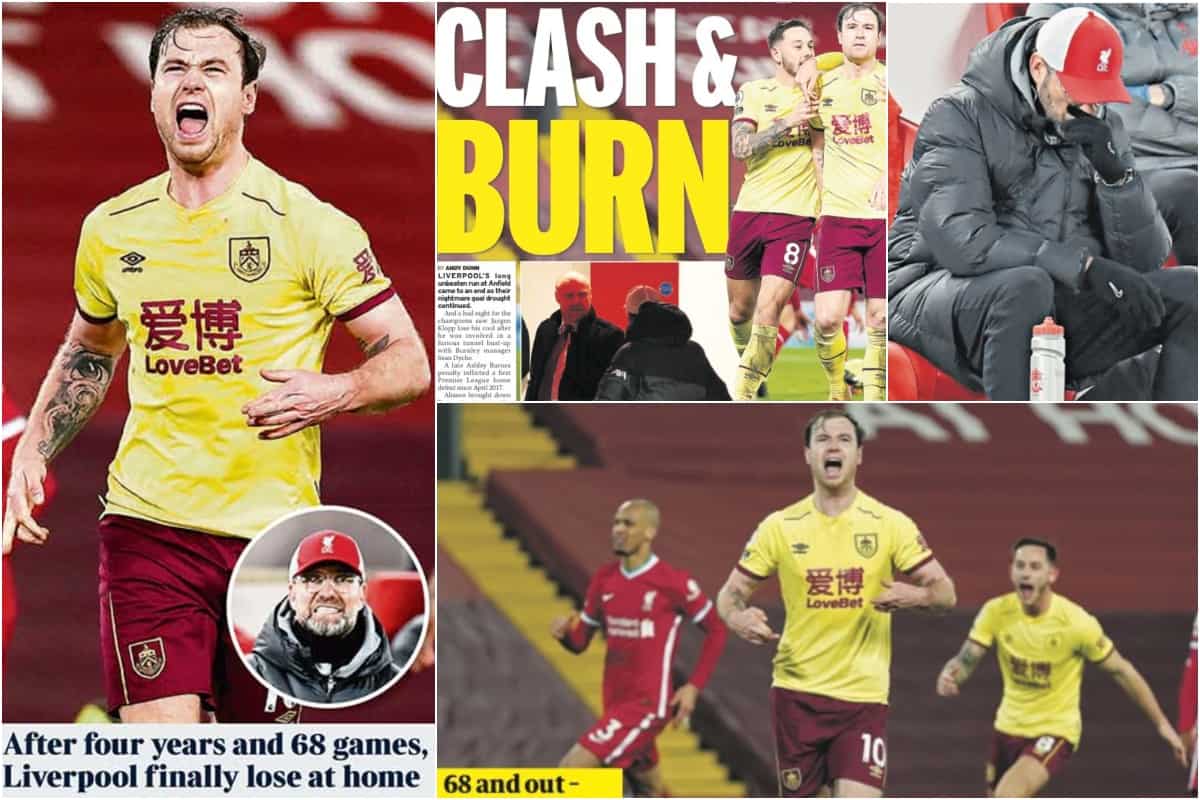 The media felt Liverpool’s shock 1-0 loss to Burnley showed the Reds have lost their identity and “aura of greatness”, and are now in a “full-blown crisis.”

Of all teams it was Burnley who ended the Reds’ historic unbeaten Anfield run, which finished at an incredible 68 games.

Jurgen Klopp‘s side are a shadow of their former selves and desperately need to find a route out of this slump with an almighty scrap for a top four place now facing the Reds.

Like the whole football world, the media were in disbelief at events at Anfield, and here’s the key analysis from the harrowing defeat.

To write that was the Mirror’s David Maddock, who reflected on a result that “sends shockwaves around the English game”:

It is a defeat that sends shockwaves around the English game, and not just because it ends the second longest home unbeaten run in Premier League history.

It also removes this team’s aura of greatness.

It was the Liverpool Echo’s Paul Gorst who said Klopp’s side are now in “a full-blown crisis”, also stating that the Reds are “as poor as they’ve been in years”:

A four-game winless run has just become a full-blown crisis.

And given how wondrous this Liverpool team have been for some time under Klopp, it is no exaggeration to suggest this is as poor as they have been in years right now.

The half-way mark of the season has only just been reached, but Neil Jones, of Goal.com, thinks this was a result that already ends Liverpool’s title defence:

The damage was done – both tonight and, probably, in terms of their title challenge too.

With a depressing assessment, the Liverpool Echo’s Ian Doyle said the priority right now should not even be about fighting for top four, but instead on just actually scoring a goal:

They just need to concentrate on one thing. And that’s scoring again. Time to go back to basics.

The only way for Liverpool to get the season back on track is to bring in new players this transfer window, in the view of Maddock:

And the painful truth for Jurgen Klopp is, he needs major surgery – and new blood – to save Liverpool’s season.

Taking a results-based view of the recent run, Jones is in disbelief at how the Reds wasted a “kind” festive period and building momentum after thrashing Crystal Palace 7-0:

It’s one thing to draw with Manchester United, anyone can do that, but Liverpool have managed to take just three points from meetings with West Brom, Newcastle, Southampton and now Burnley.

The fixture list was kind to them over the festive period and they didn’t take advantage. Their momentum was checked and they haven’t been able to get it back.

Reporters are shocked by how the Reds are so out of form, so easy to play against and still falling foul to the same old problems…

First off, the Mail’s Ian Ladyman described the display as “too recognisable” to those of recent times, as it repeated the same traits of being “too slow” and “too predictable”:

Doyle bemoaned Klopp’s side coming unstuck to the same plan from opposition – that being sitting back, forcing the Reds into hopeless crosses before nicking an inevitable soft goal:

Burnley’s gameplan wasn’t clever. It wasn’t unexpected. It was, in essence, pure Burnley. But it was merely echoing the approach that just about every team is employing against Liverpool right now.

Stick players behind the ball. Let the Reds have it out wide. Head possession away. And then look to threaten on the counter-attack or set-pieces. So easy. Yet so, so effective, especially with no fans inside Anfield to roar Liverpool on in the closing stages.

The Telegraph’s Chris Bascombe felt the Reds played right into Burnley‘s hands by swinging in hopeless crosses instead of working better positions for low deliveries:

But Burnley are the type of side which can tolerate high, whipped crosses from deep. Liverpool spent the first 60 minutes failing to deliver enough low crosses in advanced areas which are more difficult to deal with.

Karl Matchett, writing for the Independent, thought Burnley‘s plan of stopping Thiago getting on the ball was key as it disrupted the Reds’ build up play at source:

As such, right from the first minute their twin approach was evident: the strikers took it in turn to block off the passing lane to him from the defenders, positioning themselves between the No. 6 and the ball at every turnover in play.

Thiago did still see plenty of the ball – but the first move out through the thirds was at times certainly hampered by Burnley’s approach.

Gorst said recent games have shown that opponents have not only sussed how to stop the Reds, but also found the ideal “blueprint” to beat them:

A blueprint has seemingly been unearthed by opposition managers. Sit in, dig deep and wait until the final quarter to go forward.

It worked for Sam Allardyce and Ole Gunnar Solsjkaer before paying off in spectacular fashion for a delirious Dyche here.

Jones was extremely unimpressed with Alex Oxlade-Chamberlain and Divock Origi, and saw the Belgian’s miss as a metaphor for Liverpool’s awful night:

Liverpool’s changes didn’t have the desired effect, though. Neither Oxlade-Chamberlain nor Origi took their chance.

Meanwhile, Doyle found one small positive in Joel Matip‘s comeback as he labelled the centre-back “easily Liverpool’s best player” on the night:

One good interception before break and a lot of wondering when the assistant referee was going to put his flag up. Easily Liverpool’s best player.

Members of the media started the inquest into Liverpool’s collapse, picking out several contributing factors…

Ladyman assessed that a loss of creativity is the main problem that has taken the Reds to this point:

No, Liverpool’s problems this season have been at the other end and that killed them again here. Liverpool simply do not create chances the way they used to.

Bascombe said that Klopp’s side have lost their “slickness and balance”, but feels the biggest problem is a lack of confidence in front of goal:

But the attacking slickness which brought the title has gone. So too has that balance between the different positions, although the defeat could be attributed to dwindling confidence in front of goal.

Meanwhile, Maddock believes Liverpool are suffering most from a “devastating loss of belief and identity”:

But make no mistake, Liverpool really are suffering a devastating loss of belief and identity, their confidence shattered by a total lack of threat in front of goal that threatens not only their title chances, but their prospects of finishing in the top four.

Andy Dunn, also of the Mirror, says the players are simply running on empty, but also feels Liverpool have been missing “that extra bit of hunger and motivation” this season:

But this is a squad that has been running on a torrent of adrenaline for over two seasons. But maybe their mental and physical exertions over such a prolonged period are taking a toll.

Bascombe suggested that the struggles are the result of the crippling injury list, but also a team that is adapting to a change of style in midfield:

So why else are they toiling so much? There is certainly a style makeover in midfield when Thiago Alcantara is the fulcrum rather than Jordan Henderson and Fabinho.

Then there is the reluctance of the full-backs to play as wingers without the defensive security of the world’s best defender. […] We can’t ignore the most inconsistent period for the once lethal front three.

Finally, Dunn believes the players and Klopp himself are badly missing the lift of the Anfield crowd during this slump:

And while they are far from alone in this – in fact, to some extent, every club is in the same boat – Klopp has a team that would dearly love the lift from its fans.

And even Klopp looks like he needs a lift, something to spark him back to his inspirational self.