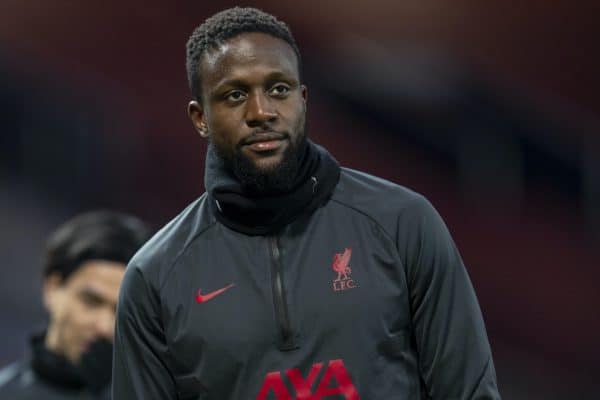 Belgium boss Roberto Martinez has stressed that Divock Origi “needs to play more” to make his squad for the Euros, hinting that he should leave Liverpool this month.

Origi was expected to move on from Anfield ahead of the current campaign, as despite playing 42 times last season the forward only clocked 1,426 minutes in all competitions, averaging 34 on the pitch per outing.

The arrival of Diogo Jota from Wolves, and the development of Takumi Minamino, looked to put paid to Origi’s hopes of an increase in game time as backup to Mohamed Salah, Sadio Mane and Roberto Firmino.

But the 25-year-old remained with the Reds – tied down to a lucrative deal until 2024 – and has seen his exposure only reduce, with 12 appearances so far amounting to 405 minutes of action.

This has seen a drop in form, too, with Origi often struggling to make an impact either as a starter or coming off the bench, and so far his only goal contributions have come with a goal and an assist against League One side Lincoln.

He has been in and out of Martinez’s squad as a result, and was left out for the most recent international break in November, with the inexperienced trio of Dodi Lukebakio, Yari Verschaeren and Jeremy Doku selected instead.

Now in an interview with FCInterNews, the Belgium manager has conceded Origi “needs to play more” to come into contention, and that “there are many expectations regarding his decision in this transfer window.”

This comes due to speculation linking Origi with a move to Inter Milan, where ironically he would find himself as cover for Belgium’s first-choice striker Romelu Lukaku.

“He remains a young athlete who, despite having scored historic goals in the Champions League and Premier League with Liverpool in the last three seasons, has not had the minutes that could be expected, at least here in Belgium,” Martinez said.

“He is an athlete who is not afraid, nothing is too big for him, so much so that he has had that success I was talking about before.

“What is certain is that he would need to play more, and have a more central role.

“Here there are many expectations regarding his decision in this transfer window.”

It is unclear whether Martinez’s reference to a “more central role” is in terms of Origi’s position on the pitch – having largely played on the wing for Liverpool – or in terms of importance to his side.

But there is much less ambiguity in his assertion that he “would need to play more,” with it unlikely at this stage that he would earn a place at the Euros.

Leaving Liverpool in search of regular game time has been mooted, with a possible swap deal involving Origi joining Schalke on loan and centre-back Ozan Kabak heading in the opposite direction on a permanent basis rumoured last month.

However, while a number of clubs are routinely linked with the No. 27 – including Wolves, prior to signing Willian Jose – as of yet there is no concrete indication of an imminent move, or that Origi himself is open to one.