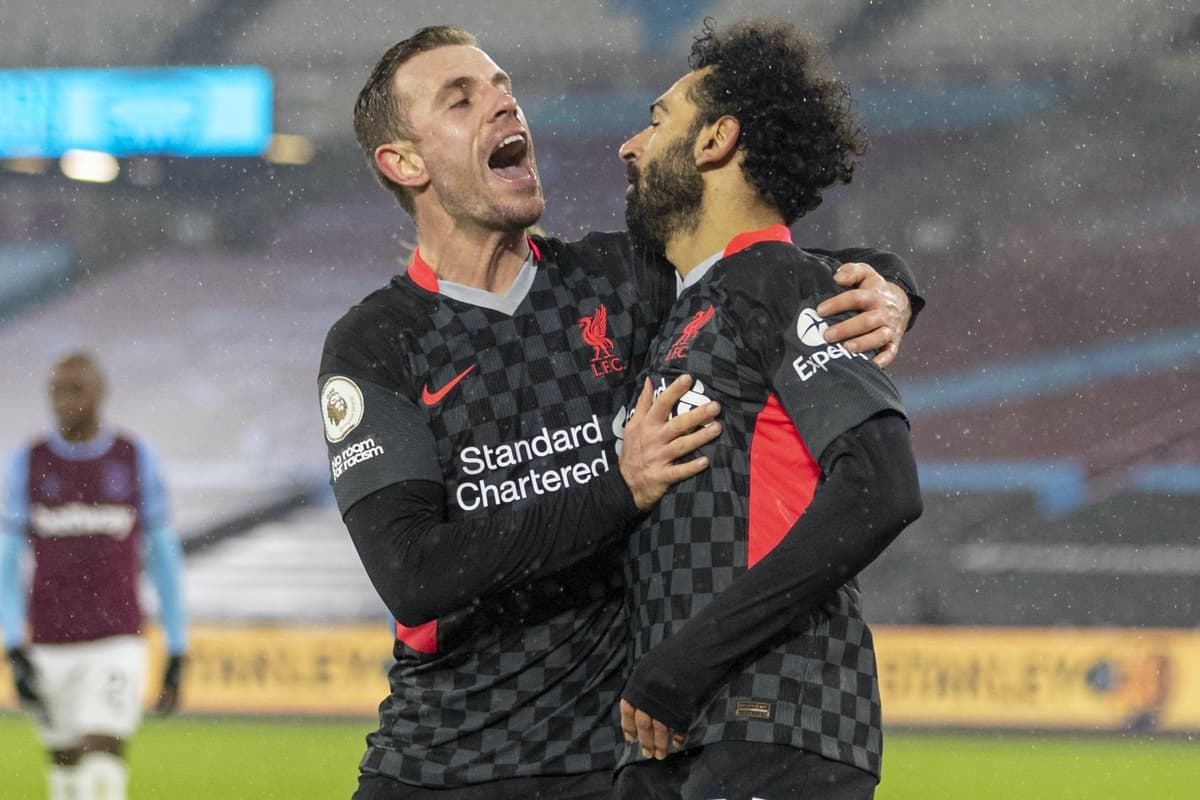 Liverpool produced an exceptional performance to win 3-1 away to West Ham on Sunday afternoon, with Mohamed Salah scoring a memorable brace.

The Premier League champions faced their second tough away game in London in less than 72 hours, following their 3-1 victory at Tottenham on Thursday night.

A low-key first half unfolded at the London Stadium, with chances few and far between and Liverpool missing Sadio Mane and Roberto Firmino.

After the break, the Reds turned on the style, though, with Salah scoring two wonderful goals in their own right – one a solo effort and the other a devastating counter-attack.

Gini Wijnaldum added a third late on and Craig Dawson scored a consolation for the Hammers, as Liverpool picked up a huge three points.

A fantastic win was lauded by the masses…

4 days is a long time in football.
Can we play in London every week?

Some 2nd half, that.

All things considered, that's one of Liverpool's most impressive performances of the season.

A PROPER performance that. Brilliant from 1 to 11

“That was the Liverpool of last season, tight and solid first half… Then bam go at them when they drop their levels slightly…”

Tactically brilliant from the first whistle from LFC.

Remember people were saying this team were finished….. not a chance #WHULIV

Neither are the long term solution, but huge credit to Henderson and Philips. Two excellent displays in tough away games against different threats in Son and Antonio. Team didn’t have to compromise to fit them in either. Great stuff.

What a fantastic victory – second half was a pleasure to watch.

To outplay such an in-form team, with so many injuries, shows why Klopp is a genius.

Wonderful Liverpool . The boys at the back are really good. Phillips looked a proper ‘colossus’ first half. Not much wrong here. A really good *squad*, let’s be right.

“Nat Philips is my MOTM.”

“Great team performance. MotM Salah for the goals with Jones getting a mention for an impact sub and Phillips for another solid performance.”

Hats off to Nat Phillips and Jordan Henderson. Klopp's midfield diamond controlled the game and limited West Ham's attacking opportunities and hence setpieces until late on. We started to play faster 2nd half and Salah got the decisive strikes. 3rd goal a cherry on top.

After the win at Spurs, Klopp said "that was 'us'," and I'd say this one was even closer to 'his' Liverpool – controlling, adaptive and deadly in the finish.

Mo Salah brilliant, should be considered among the very best strikers in the club's history.

Mohamed Salah now three goals clear in the race for the Golden Boot, with 20 in all comps for the 4th season in a row. Really does deserve more plaudits.

There was special praise for the quality of the goals…

Dear me. What a goal that was.
Counter par excellence.

A word or two about those goals. Everyone of them sublime, but the Trent diagonal to Shaqiri, inch perfect lobbed centre to Mo whose control and finish was pure filth, and all of it in one flowing move, will be described as trademark Liverpool, but it was sheer poetry in motion

OH MY WORD! Goal of the season worthy. The quick paced counter attack, the ball from Shaq to Mo was sublime and the touch and finish was even better!

That goal is absolutely out of this world. The touch from Salah to make the chance is extraordinary.

And the title race is still very much alive…

ANOTHER WIN. SALAH BRACE, WIJNALDUM GOAL. MOVE INTO THIRD PLACE, A POINT BEHIND UNITED AND FOUR BEHIND CITY. WE MOVE! ??? #LFC #YNWA pic.twitter.com/Y021PpTgeh

“We are winning the league.”

“Great back to back wins. Lets keep the momentum up. Long long way to go.”

This had the potential to be a real clanger, and leave us further adrift in the title chase.

Not these lads. Played in unison and ramped up the style. Champion-esque. Up the Reds!

The fact that we are starting a match with Henderson + Nat Phillips at Centre Back & we are still in the title race after 12 CB different pairings due to injuries, find me another coach that can do that. Jurgen Klopp deserves immense respect.