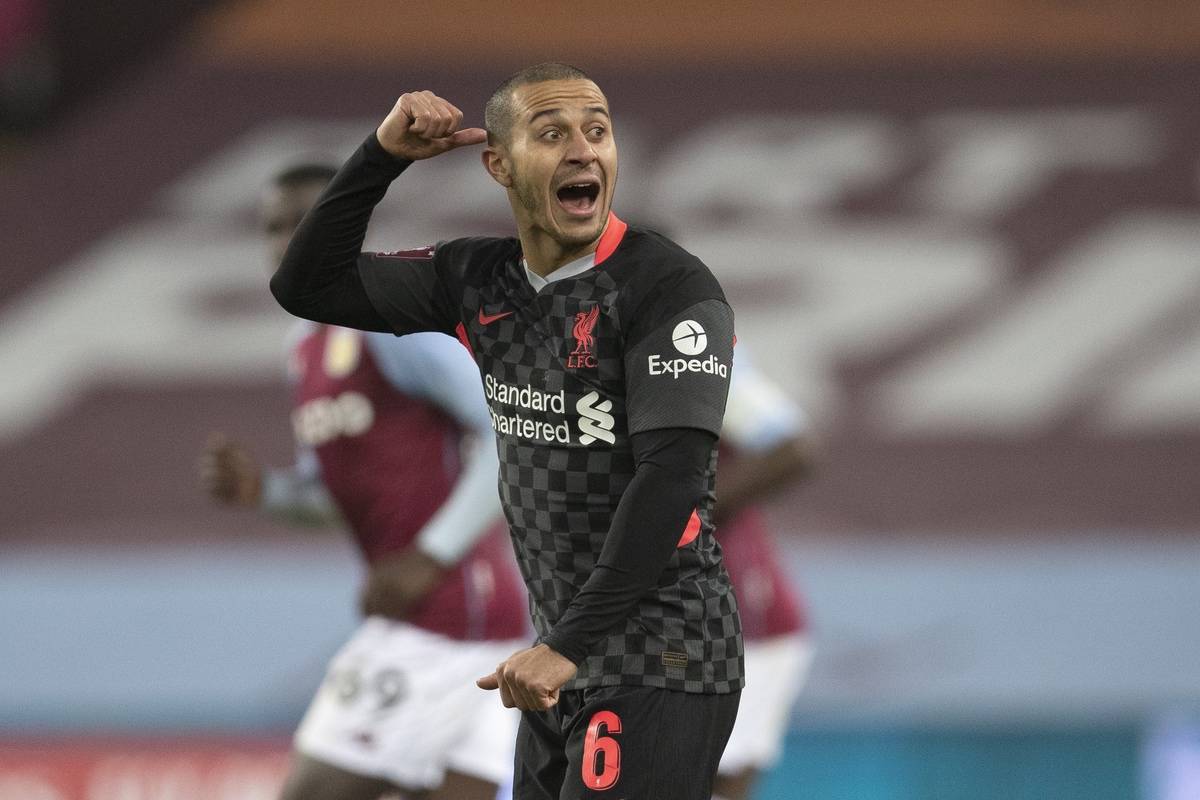 It was a tough slog for Liverpool but they managed to get the job done against a plucky young Aston Villa outfit in the FA Cup, leaving mixed emotions for Reds.

It was an interesting set of circumstances for the Reds as they met an Aston Villa side made up of teenagers with no first-team experience in the third round of the FA Cup.

Sadio Mane looked to have started what many expected to be a procession, but wasted time in possession with no clinical edge was duly punished as Villa pegged one back through Louie Barry.

Tiring legs and the introduction of Thiago and Xherdan Shaqiri changed Liverpool’s fortunes as they found their forward impetus and located some of the missing scoring boots.

Mane, Gini Wijnaldum and Mohamed Salah would make sure of the result in the end, but the young hosts certainly deserved plaudits for their display despite seeing the Reds progress to the fourth round of the FA Cup.

In an otherwise dour match, Shaqiri & Thiago lit up the night…

If you think I'm going to wax lyrical about Thiago's sensational performance against a group of Year 9s, you'd be absolutely correct.

Shaqiri has been on the pitch for ten minutes. In that time, we’ve scored three goals and Shaqiri has assisted two of them. Klopp should let him out of his basement more often.

Thiago is not just the best player on this pitch, he’s the best on nearly all of them. Don’t think some supporters know quite how elite he really is.

Shaqiri is the first Liverpool player to assist two goals in a game since Alexander-Arnold against West Ham in February.

So, so much more incisive with Thiago and Shaqiri on the pitch.

Every Thiago pass is like an M Night Shyamalan movie. No idea where its gonna end up.

Shaq's maybe been the best player on the pitch since he came on hey maybe this will be the time he stays fit.

Game changed with impetus & creativity Thiago added and Villa youngsters tiring. Klopp maybe had some firm words at halftime too.

If #LFC are without Trent Alexander-Arnold and Andy Robertson (or even just one of them to be honest), Xherdan Shaqiri is almost a must. Offers something completely different in the Reds attack, where the final ball and creativity has been missing for a few games.

There was still concern over creativity in attack & targetless crosses…

Thiago has to start vs United. Less crossing, more precise football when he’s on the pitch.

Hard to overstate how worrying it is that Liverpool simply cannot create quality chances at the moment regardless of the calibre of opposition. Scarily blunt in every single game since Palace.

The Villa team has put in an absolutely incredible performance in that half but Jesus Christ some ideas from the Liverpool attack wouldn't go amiss.

Liverpool midfield should learn on how to play like thiago. It’s time to stop useless crossing and start for creative attack for midfield??

Reds had plenty of praise for Villa’s youngsters…

But take nothing away from the @AVFCOfficial kids, they’ve been incredibly disciplined for a team of teenagers and keeper’s having the game of his (short) life

Ah they’ve got the Solihull Buffon in goal. Sound.

An average age of 18 years, 294 days. A team put together so late in such a strange circumstance. They conceded so early, but didn't capitulate, showed courage and scored a superbly worked goal. All the good words reserved for Aston Villa in the half. Embarrassing from Liverpool.

I know everything is *dead serious* about footie now, but can’t help but think about these Villa lads having loads of messages off their mates asking what Salah, Mane, Thiago and the rest were like to play against. Tiny bit of ‘romance of the cup’ about that…

FT: Villa 1 #LFC 4: Job done. Klopp's men into the fourth round. Whatever was said at the break did the trick after an embarrassing first half when Mane's opener was cancelled out by Barry. Wijnaldum, Mane and Salah doing the damage second half. Villa's kids deserve great credit

And now onto the 4th round & Man United…

Keep everything crossed now to have Matip back for United. No chance we can go with Williams or Phillips against their pace.

We should have done much better in the first half but all credit goes to the Villa kids! I’m in love with Thiago and Shaqiri and it’s great that Mane and Salah on the scoresheet as well! Onto the next round, now a good rest before Utd! pic.twitter.com/o47eBbyaYt

All Liverpool needed to do was win the game. They did. We're through. Not great first half. Well done to Villa kids, but a game has 2 halves and Liverpool have Thiago! 4-1, a goal ruled out unfairly imo and Thiago hits bar. All in all, I'll take that

Ultimately glad Liverpool had a scare in this game because complacency has definitely been an issue post-Palace and so it was good/encouraging to see them rise to the need to show character here, something that wouldn’t been the case if they’d just walked it 8-0.

If Matip isn’t fit for the United game, I’d be tempted to put Henderson CB and Shaqiri in midfield or on the right of a 4-2-3-1.

Was always going to be a tricky game for #LFC. First half poor but second half Thiago dragged the level of the team up a few levels. Unbelievable footballer. As is Shaqiri who always makes things happen. Job done today and onto a huge game against United.