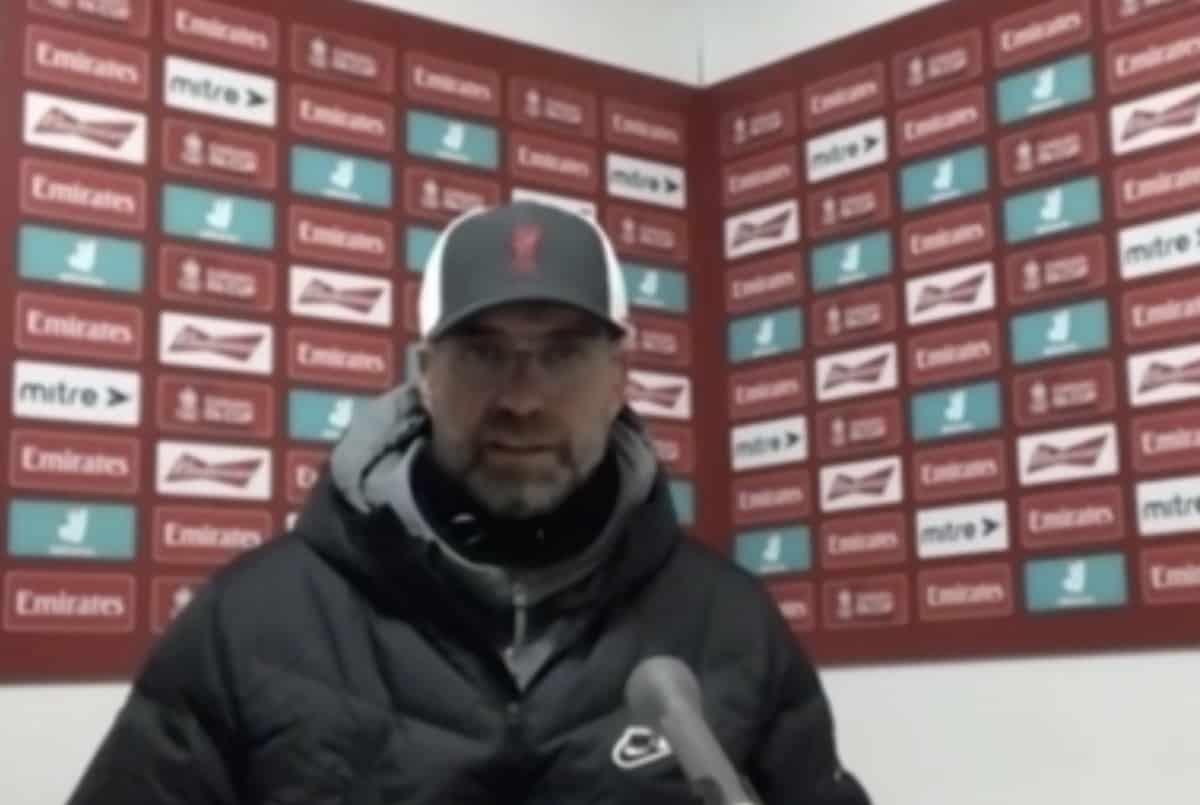 Jurgen Klopp was pleased to see his side make “a lot of steps in the right direction” in their FA Cup defeat at Man United but insisted there is still a lot of work to do.

For the second time in the space of seven days, Liverpool met Man United but this time it came with a spot in the fifth round of the FA Cup on the line.

And while it would not be the Reds who would progress, a place on the scoresheet proved to be the obvious positive for Klopp’s side – with Mohamed Salah and Roberto Firmino combining on both occasions.

At the other end of the field, poor decision making would prove costly and see United force Alisson to pick the ball out of his net on three separate occasions.

A defeat was not on the agenda, but an improved performance was enough for the manager to see his team are moving in the right direction.

“It’s not what we wanted, so it’s frustrating. If you wanted to win tonight you had to be at your absolute top [level] and we weren’t,” Klopp told reporters post-match.

“We made a lot of steps in the right direction. Start of the game was good and then we made decisive mistakes.

“Around the first goal, we obviously had too many options offensively and no protection, so we lost the ball on the counter and it was not the first one of the game.

“We wanted to score, that’s good. And we did that, we scored twice and so it’s all okay, but in the end, they scored three and we scored two.

“We can take positives out of this game, of course, I saw a lot of steps in the right direction.

“It was good preparation for the Tottenham game, we know exactly what we have to work on. We want to make steps and tonight we did, not the final ones but at the moment it is okay.

“In the end, we know it’s a result game and we want results.”

And as questions continued to focus on the lack of goals, Klopp did not want to delve too deep into it as he instead focused on the push to turn it around.

“You don’t have to worry about us, as a group we are really together,” he continued. “Nobody thinks about what has happened in the last few years, nobody, we just try to win football games again.

“What I’ve said is that if you don’t score for a while, it is not good for the confidence and the best strikers can tell you that. It’s all about how we deal with it.”

There will be hope that it can be solved in the Premier League against Tottenham on Thursday evening, which would end a four-game league run without a goal.