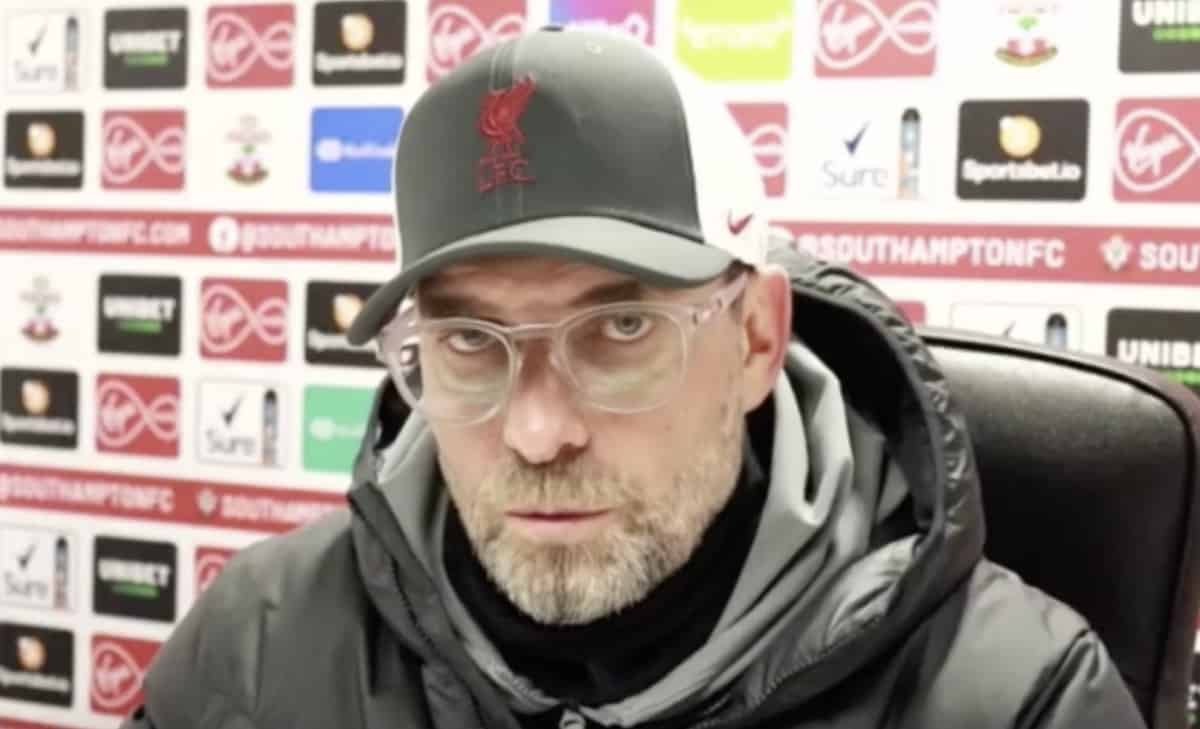 There were “no excuses” for Liverpool’s poor outing in their 1-0 defeat at Southampton for Jurgen Klopp, but there were strong words for the performance of the referee.

It was yet another night to forget for the Reds as their slow start proved damning, with Danny Ings hitting the winner with just two minutes on the clock.

What followed what was a performance which lacked rhythm and authority as Liverpool struggled to land an accurate pass or conjure a consistent threat in attack.

In fact, a shot on target did not land until the 75th minute, the longest wait in the top-flight since 2015, as decision making and composure deserted the team.

It was “frustrating” for Klopp after the inability to find a final ball and make good of their dominance on the ball, as was the display from referee Andre Marriner and VAR.

“Very frustrating just because it was so unnecessary. We had a bad start in the game, played completely in Southampton‘s hands,” Klopp told reporters post-match.

“We gave the game away in the first few minutes because after that we were not calm enough to create the opportunities to turn it around.

“First half was massively influenced by the start but the break we could settle a little bit but then dominant in the right areas but then the decision making was not good.”

The evening was also marred by some questionable, and that’s being kind, decisions from the referee after a number of penalty calls and free-kicks went against Liverpool – primarily against Sadio Mane, and the boss had plenty to say.

“Someone tell me how quickly they could look at all these different angles. You have those situations.

“If this boy would go down easy we would have this time a penalty and last game [Newcastle] a penalty, a stonewall penalty but what Andre Marriner did with Mane tonight I’m not sure that’s okay.

“The boy tried absolutely everything. There were a few great challenges but there were a lot of situations which should have been free-kicks as well.

“The last situation when he goes down in the box he hits him in the end with his left foot and that’s another penalty.

“I heard now that Man United had more penalties in two years than I have in five-and-a-half-years! I have no idea if it’s my fault, I don’t know how that can happen.

“But that’s no excuse for the performance of tonight because that’s something we can change and that’s where we’re going to put all our effort now.”

Next up is another road trip to Aston Villa in the FA Cup before the Reds host Man United in a crucial Premier League clash on January 17.