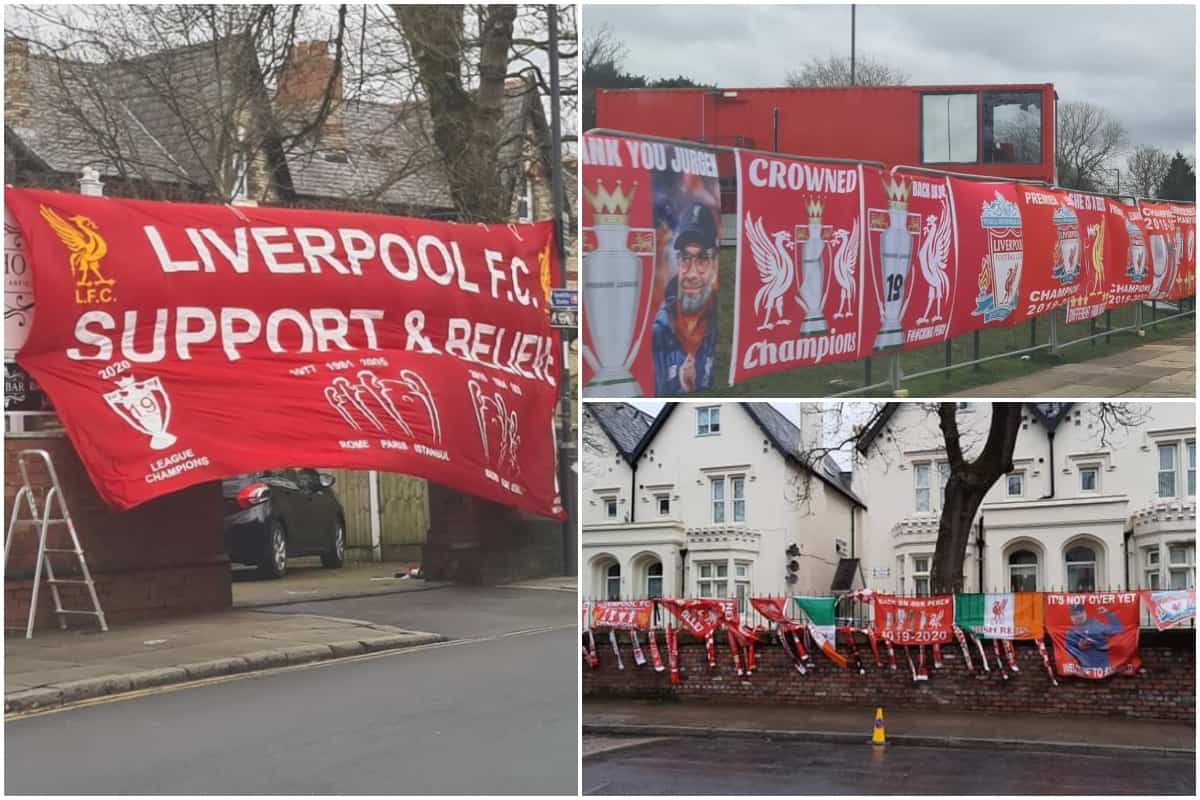 Liverpool fans have shown their support for the Reds in the only way they can in the current climate, with a sea of brilliant banners welcoming Jurgen Klopp‘s side ahead of today’s derby.

The Reds meet Everton at Anfield for the first time since the pandemic hit, meaning over 50,000 fans are unable to will their team on in a manner which the club is renowned for.

And with Klopp’s men needing the force of the Liverpool faithful more than ever after a run of poor results, they have not been left disappointed.

Fans have adorned both sides of Anfield Road, the route the Reds’ bus will have passed into the ground, with countless banners and scarves symbolising the faces who, on any ordinary day, would be there to support the team in person.

In his pre-match notes, Klopp made it clear that his team will still feel the presence of the fans and this latest gesture will have solidified such emotions.

“But I want everyone who reads this to know we feel them with us and know they stand shoulder to shoulder with us, whatever the circumstance,” he said. “We will never take it for granted.”

It’s a special sight and here’s hoping fans will be the ones to lift them proudly sooner rather than later:

Just went to pot driving down Anny Road there. Brought back boss memories. Our real fans doing what they do best, get behind the team ALWAYS regardless of form!! Feels like a big one today, right up for it!! What I'd give to be in that ground!! Bring out the Champions!!! pic.twitter.com/G7KQarosbK

Not you’re typical derby day!!but great to see the flags out folks?? pic.twitter.com/F4sVFTDZ81

Look at what this guy Neil has done @DoubtersB hes had flags donated to him and hes decorated the Anfield road for when the team coach comes past to geee up the boys..well done Neil ? #LFC #LFCfamily pic.twitter.com/WCRWHjhtg7

No one does it quite like the Reds, especially when a pick-me-up is needed, and here’s hoping the day ends on a celebratory note with three points against Everton.