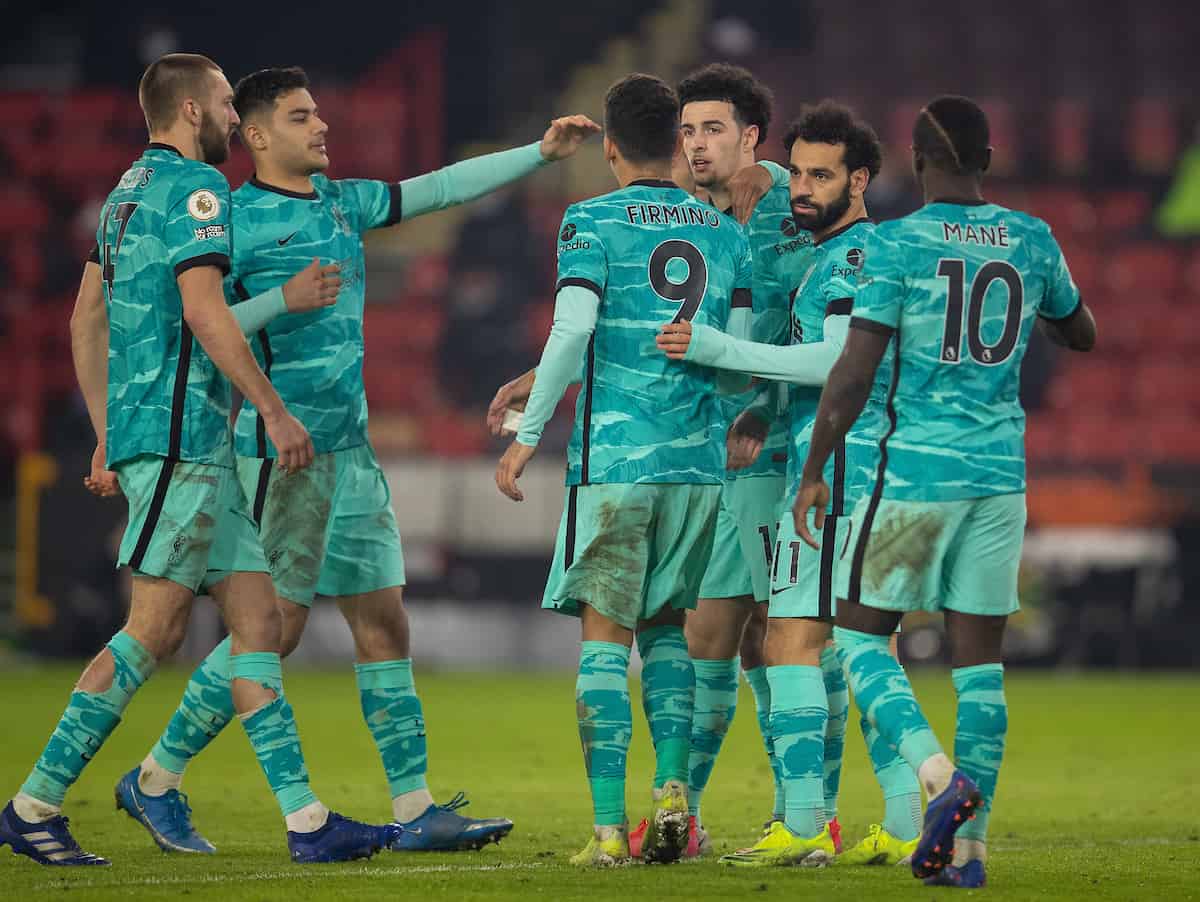 Liverpool secured a much-deserved and hard-earned victory in Sheffield, impressing in several areas ahead of a big game against Chelsea this week.

Clean sheet for Kabak and Nat

It was the first time since the Champions League meeting with Atalanta in November, when Rhys Williams and Joel Matip started, that Liverpool had used two natural centre-backs in the position.

Sheffield United are third in the league for ‘final third pressures’ per statistics website FBref, behind Liverpool and Leeds United, so this wasn’t going to be an easy evening for inexperienced and unfamiliar defensive duo Nat Phillips and Ozan Kabak.

There was one heart-in-mouth moment for Kabak when he turned the ball into his own net after Adrian failed to take control of a situation when he should have.

The Turkish defender knew at the back of his mind that Oliver McBurnie should be flagged offside in this moment, but there is never a guarantee that this will happen even with VAR. To Kabak’s relief, the linesman raised his flag as he turned to check.

Kabak was beaten again by an onside McBurnie in the second half but made a brilliant recovery tackle after being caught out initially.

Phillips was generally solid and reliable throughout, and a clean sheet will give the pair confidence if they are to partner each other again in the future.

After seven league games without a clean sheet, it was a welcome sight for the Liverpool defence to finally see a zero in the goals against column.

Further chances arrived, first for Curtis Jones who perhaps the best opportunity of them all to score from Trent Alexander-Arnold’s excellent cross, but couldn’t quite find the finish he wanted and was again thwarted by Ramsdale.

Alexander-Arnold himself tried his look with a left-footed shot after beating a defender in the box, while Salah and Wijnaldum were also thwarted by the United stopper.

Ramsdale made five saves in that first half, the most he’s ever made in the opening 45 minutes of a Premier League game.

The Englishman had been unconvincing between the posts for the side sitting bottom of the Premier League, but anyone watching him for the first time against Liverpool would be suggesting he take England’s No. 1 shirt at the Euros this summer.

He was eventually beaten in the second half by Jones and then Firmino’s deflected effort, but it could have been a much larger scoreline were it not for the display of the United keeper.

Judging by the average positions of the players’ actions in this game, Curtis Jones was the player furthest forward for Liverpool alongside Mohamed Salah. And even though he found himself in advanced positions, he still finished the game with a pass success of 96 per cent.

He regularly made forward runs from his starting position on the left of midfield, as shown when he got on the end of that Alexander-Arnold cross for the best chance of the first half.

He was also the first to take one of those chances for Liverpool, again following good work from his fellow Scouser.

Alexander-Arnold just managed to cross the ball before it went out of play, and when it eventually fell to Jones, he finished coolly.

The game was all about Trent and Jones. The right-back appeared to be moving inside more regularly and having tested Ramsdale with that left-footed effort in the first half, he attempted another shot with his left foot in the second which was deflected behind (though a corner wasn’t given).

They played a big part in the win and their mentality rubbed off on the rest of the team.

The early save by Ramsdale and the decision to pass when in a great position to shoot meant it looked like it was going to be another one of those days for Firmino.

The Brazilian desperately needed a goal, but starting from a slightly deeper position when Liverpool had the ball, rather than constantly dropping off the opposition defence into midfield, he appeared a lot more comfortable in general play than he has in recent weeks.

He went on to play a big part in the second goal, starting from outside the area and working his way into it with a bit of help from Mane. His perseverance earned him and his side a bit of luck as he doubled the lead.

It will go down as a Kean Bryan own goal, and the shot looked like it would have gone out for a throw-in were it left to its own devices, but Firmino got to celebrate it nevertheless, and it will be a boost for him going forward.

Chelsea will provide a much different test at Anfield on Thursday, but Liverpool can take the positives from this game into that, not least the successful tweak of their shape which saw Jones further forward and slightly different roles for Mane and Firmino when the team had the ball.

Jones was consistently Liverpool’s best midfielder in the early part of the season, and he’s now added something extra to the side in this advanced role.

He was withdrawn at the end of the game much to his displeasure, but this was more than likely done to keep him fresh for the Chelsea game and is a compliment from Jurgen Klopp that he rates him highly enough to rest him late in games.

Liverpool are now just a point behind Thursday’s opponents who sit fifth, and two behind fourth-place West Ham. Their goal difference is better than the Hammers’ but not Chelsea‘s, yet.

Naby Keita’s appearance off the bench in this game shows he’s ready for games and could be an option for Klopp if he wants to mix things up against Thomas Tuchel’s side.

James Milner’s late appearance was also encouraging in terms of squad fitness and availability, and they will hope to have Diogo Jota involved, with Klopp confirming post-match that the Portuguese forward and Fabinho should both be okay for Thursday’s match.