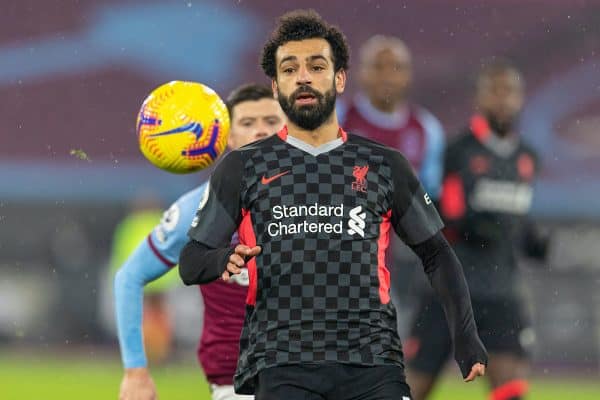 Mohamed Salah stole the show in Liverpool’s eye-catching 3-1 victory at West Ham, but a centre-back and a midfielder were also immense for the Premier League champions.

The Reds were looking for another successful away day in London on Sunday, having seen off Tottenham earlier in the week.

There was little of note to report in the first half, although Nat Phillips defended admirably up against the dangerous Michail Antonio.

Liverpool were majestic after the interval, however, with Salah scoring two stunning efforts and Gini Wijnaldum adding a third.

Craig Dawson’s late consolation may have caused minor concern, but the Reds saw out a massive win in professional fashion.

It was no surprise to see Salah (9.0) take home the highest average rating – an extremely high one too – following a world-class performance in front of goal.

The Egyptian changed the entire game with two outrageously good finishes at a point when it was threatening to peter out.

TIA‘s Joanna Durkan lauded Salah for his “finesse and pinpoint accuracy” in the final third, also correctly adding that his “prowess can often be underappreciated.”

Ian Doyle of the Echo was another who gave the 28-year-old Man of the Match, highlighting a “clearing header in his own box” that summed up his team ethic.

In second place was Phillips (7.7), who again did a commendable job at centre-back, filling in for four injured players ahead of him in the pecking order.

Making up the top-three was Wijnaldum (7.6), as he again excelled in the No.6 role and also found the net as an added bonus.

Durkan praised his efforts in a disciplined role, but also noticed that his “forays forward typically ended in either a shot, set-piece or goal.”

Divock Origi (6.1) got the lowest all-round rating, but he still put in a shift and Doyle felt the Belgian produced a “decent second-half showing.”

The matches keep coming thick and fast for Liverpool, with the Reds now preparing for the visit of Brighton on Wednesday night.