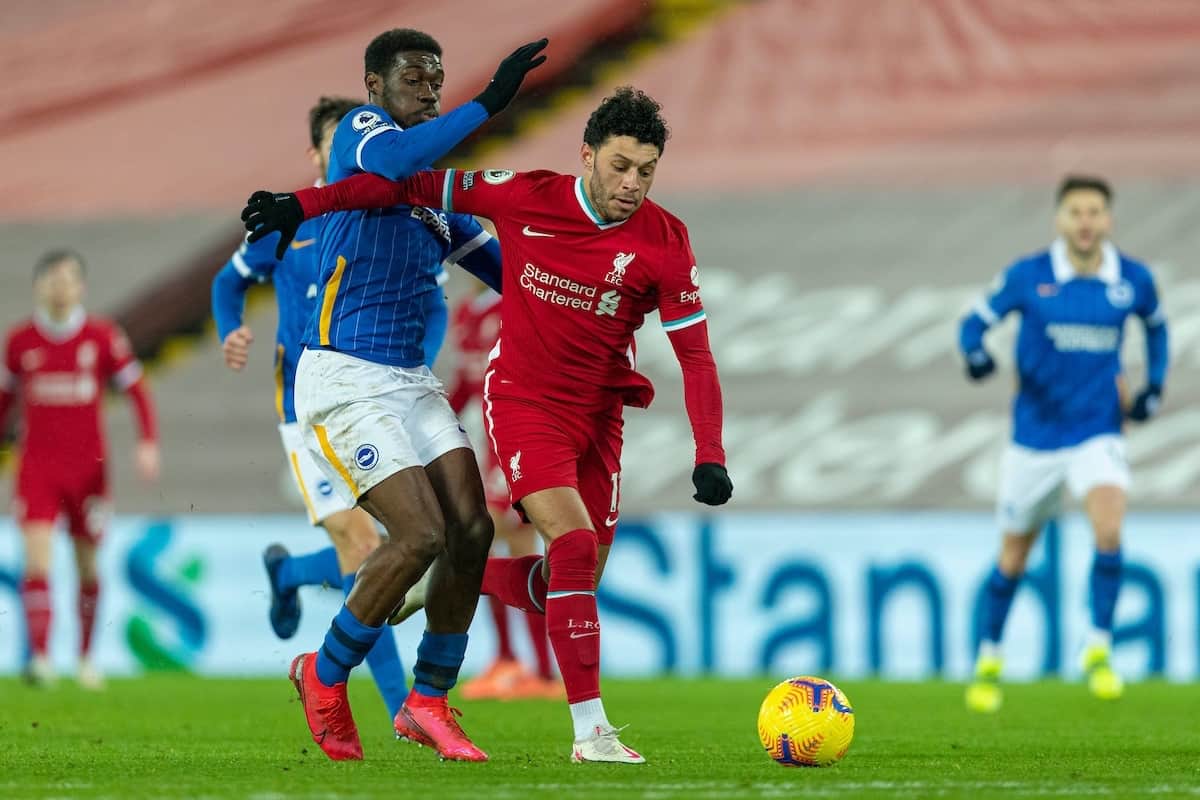 Liverpool suffered a second successive Anfield defeat with a 1-0 loss against Brighton after lacking any resemblance of attacking impetus, leading to many frustrated Reds.

The Reds were back at Anfield aiming to make it three wins on the spin the league for only the second time this season when Brighton came to town, but they would only taste defeat.

The first half was uneventful, to say the least, with neither team having landed a shot on target – with Liverpool dominating possession without any meaningful return.

And while the start of the second started in a similar fashion, it was the Seagulls who struck first after poor defending from the Reds paved the way for a fortuitous Steven Alzate goal.

For all of Liverpool’s possession, they could not muster anything to challenge the Brighton ‘keeper in what was an easy evening for the Brighton defence, derailing what had been a positive two results heading into the clash.

Well that was hideous to watch.

No coincidence the two great recent performances came away at good teams. Lower teams have figured out how to play against us and we don’t look like creating any chances in a million years let alone score a goal.

Zero impetus from Liverpool. A new centre-back won't change that.

Origi tackling Robbo and then launching it out for a goal-kick summed it up – and sums up how useful he has become.

Liverpool have become very predictable, especially when you're a Premier League side with hours of footage to watch when preparing to play them. Teams who follow the same setup seem to get the same result at the moment. #LIVWBA

“No shots on target in 45 minutes. Nothing more to say.”

“If someone could send Klopp a “beating a low block defence for dummies” manual That’d be great. Groundhog Day.”

I mean, we can barely string two passes together lately. It's confounding just quite HOW we can be this crap with players who are decidedly not crap.

No fight tonight. I can’t accept that. Hurts this.

Liverpool have won ONE from seven games against the Premier League bottom 6. Clear issue.

It’s another one of those Anfield games where not having Fabinho in the centre of the park isn’t helping Liverpool. Not only does his ball winning help to hem teams in, his first instinct is always to pass the ball forward quickly & #LFC haven’t done that enough tonight #LIVBRI

Defensively, the defence injury crisis isn’t actually ‘that’ much of an issue… so long as Alisson plays. When he doesn’t, anything can happen. #LFC

Jordan Henderson has been magnificent in central defence, but it hinders this Liverpool team so much with him absent in midfield.

No attacking presence down the left, Mane so crucial to this side.

All out. And you're wondering why we're struggling.

We miss Jota incredibly and it shows

Kelleher has done very well the few times he's needed to make a save!

“Well… without Kelleher’s saves, we are looking at a three or four-nil defeat tonight.”

We have a keeper in Kelleher.

To be fair though. The kids are boss. Phillips is good. Kelleher is good.

The only positive from tonight is Kelleher's performance.

And there’s only the prospect of Man City next, where a response is needed…

City at the weekend is a petrifying thought.

We could get embarrassed at this rate.#LFC

That was painful to watch, Sunday’s massive now

Injuries are killing us but that was just a brainless performance by #LFC. Same against Burnley. Absolutely devoid of ideas and the slowness of thought and passing was awful. It’s a big problem to solve for Klopp against a low block. It’s cost us the title this season.

Concerning that Liverpool didn’t even look like scoring. Only Man City next. ? #LIVBHA

“Yeah, the title is lost. Let us take out our frustrations on City.”

– JibJab on the forums.

“Worst performance of the season so far……and after 2 great shows. Play like that sunday man City will murder us.”

Grim performance from Liverpool tonight. Yes the Brighton goal was fortunate, defensive mistake and a shot that was going wide unintentionally deflected in but the truth is #LFC deserved nothing from the game.The squad is stretched but far too many passengers on the pitch tonight

That was pretty poor to say the least folks!!didn’t deserve anything out the game,the play was far too predictable once again at Anfield!!Goes without saying the team has to get the home form going again ASAP.