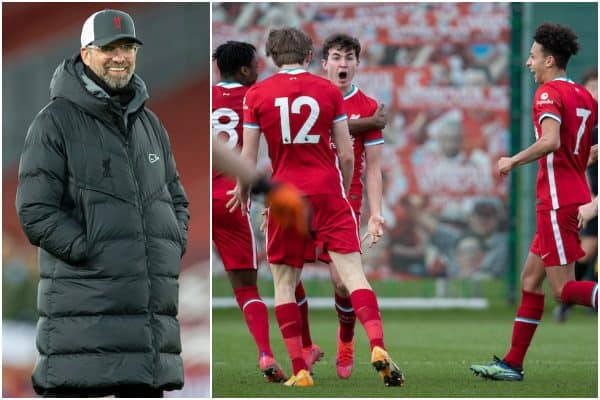 Liverpool will play an intra-squad friendly at Kirkby on Saturday and training on Thursday gave us a look at the exciting youngsters who should be involved.

Liverpool will enjoy their longest break of the season this month, with 20 days between their win at Wolves and their next fixture at Arsenal.

With the FA Cup no longer on the agenda and the first international break of the year to contend with, the Reds will be missing a number of key faces at Kirkby.

Time will be cut out for all senior figures to be handed a much-needed break, but work continues to ensure the Reds hit the ground running on their return at the Emirates.

And this is where Liverpool’s academy stars will prove to be one of the benefactors of Liverpool’s three-week break, with Klopp drafting in some of the club’s brightest young talents to make up the numbers.

The pathway has been made more seamless following the move to the Kirkby training base and on Thursday the manager and members of his senior team were joined by a young 16-man cohort.

Some have trained with the first team before and will be recognisable to Reds, including Ben Woodburn, Billy Koumetio, Leighton Clarkson and Jake Cain.

But those pushing to follow in their footsteps and catch Klopp’s eye were on show, with exciting Polish midfielder Mateusz Musialowski one of those aiming to seize his chance.

The 17-year-old has provided some breathtaking moments for the under-18s this season with his confidence bursting from a pack on show in addition to his composure and technique with the ball having lent itself to seven goals and two assists in 17 games.

He is one for the future but you can never say never, with Klopp true to his word that if you’re good enough, you’re old enough.

Continuing the theme of men in the middle, new signing and highly-rated Kaide Gordon, who has four starts to his name for the under-18s, was present alongside James Balagizi and Wirral born Tyler Morton.

All three of whom the club will have high hopes for, but impressively it is important to note that Morton has outscored every other academy hopeful this season but the prolific Layton Stewart, with nine to his name.

With defenders in short supply at senior level, a four-man contingent of Owen Beck, Conor Bradley, Jarell Quansah and James Norris took to the grass and rubbed shoulders with Xherdan Shaqiri, Alex Oxlade-Chamberlain and Naby Keita.

Quansah has been an ever-present for the U18s at centre-back, with parts of the Warrington-born’s game likened to that of Rhys Williams such is his composure and calm nature.

One to watch as an emerging right-back is Bradley who is as persistent in defence as he is in attack, with one goal and three assists this season. He is one not to shy away from a tackle or challenge.

Luis Longstaff, who is no stranger to first-team training having linked up with Klopp and Co regularly, was present and no doubt helped test young shot-stoppers Harvey Davies and Jakub Ojrzynski.

It’s been a few weeks to remember for the pair having been named in a Champions League and Premier League matchday squad respectively following Caoimhin Kelleher‘s injury.

Nat Phillips, Alisson, Adrian, Neco Williams, Kostas Tsimikas, Rhys Williams and Ben Davies rounded off the senior contingent on Thursday and their presence alone will prove invaluable for the Reds’ academy stars in training and during the intra-club match.

And while it will be anything but easy for the youth abovementioned to break into Klopp’s team in the immediate future, the knowledge that the pathway is there will only prove beneficial to all.