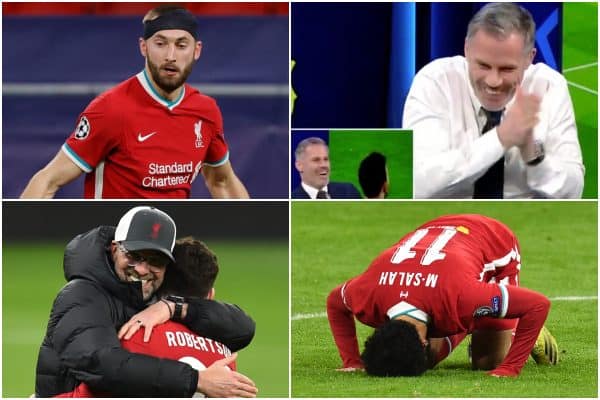 Liverpool coasted past an RB Leipzig side that underestimated the challenge ahead of them in the Champions League, with dreams of Istanbul 2.0 growing among fans.

Having already taken a 2-0 lead from the ‘away’ leg of a two-legged tie held at the Puskas Arena in Budapest, the Reds put their wavering Premier League behind them to seal a ‘home’ 2-0 win on Wednesday night.

Mohamed Salah and Sadio Mane got the goals in a game Liverpool dominated, as though Leipzig certainly had chances, it seemed as though manager Julian Nagelsmann set his side up to fail.

The return of Fabinho to midfield helped the Reds in their ability to stifle their Bundesliga opposition, while both Nat Phillips and Ozan Kabak held firm at centre-back, allowing their team-mates to thrive further forward.

As a rare boost of positivity in a miserable period for supporters, Liverpool’s progress to the quarter-finals sparked much conversation on social media.

Here are five things fans have been talking about following the triumph in Hungary.

During the most miserable lows of the injury crisis, it was routinely suggested that Liverpool should sign a Klavan-type to bolster their defensive ranks: an unfashionable, unassuming centre-back who does the basics well and little else.

It turns out that player was in the squad all along, in the form of Nat Phillips.

This was Phillips’ Champions League debut, in his 10th appearance of the season, and though it was not a performance without its flaws, a progress-clinching clean sheet has earned him a unique place in the hearts of supporters:

Nat Philips is currently in the dressing room heading the door. pic.twitter.com/7Xd8Ylkhx5

Seriously though, get Phillips signed up as a 4th choice CB. So solid.

Is Phillips the future of Liverpool’s defence? Perhaps not, but he’s filling the void admirably.

Can we play here every week?

For the first time in their history, Liverpool played a home game away from their home of Anfield, with both legs of this last-16 tie held at the Puskas Arena.

Given the Reds’ struggles at Anfield of late, it was almost a relief for Klopp’s side to travel for this decisive clash, allowing a symbolic shedding of the pressure on their shoulders.

As notorious statistician Richard Jolly pointed out, two goals on Wednesday night ensures Liverpool have now scored more goals in Budapest this year than they have on home soil:

Liverpool have scored more home goals in Budapest than in Liverpool in 2021.

Unsurprisingly, this has led to This Is Puskas Arena shouts spreading across social media, with fans half-jokingly asking if we can play there every week:

Liverpool won’t, in fact, be back at Anfield for another month, with only one more fixture this month – away to Wolves on Monday night – followed by a trip to Arsenal on April 3 and then finally Aston Villa at home on April 10.

The Egyptian is now clear of the late Ian St John as the club’s 13th all-time leading goalscorer, with 119, and is rapidly gaining on Dick Forshaw (123) in 12th.

This season, Salah has averaged a goal or assist every 109.4 minutes, with his remarkable consistency a quality that cannot be overlooked as speculation mounts over his future.

While the comparison is questionable, it was pointed out that Salah’s treble of 25-or-more-goal seasons drastically outweighs the goalscoring feats of Wayne Rooney at Man United:

25 goals in all competitions this season now for Mo Salah, for the 3rd time in 4 seasons.

Rooney managed it twice in 13 years at United.

Salah may not be a Liverpool player for the rest of his career, but he should be cherished while he remains at Anfield.

Carra gets carried away

It’s safe to say all our eggs are in the Champions League basket now – Klopp’s team selection for the loss against Fulham underlined this, despite his objections to the contrary.

Winning the European Cup for a seventh time would mark this campaign as an undeniable success, but it would be remiss to get carried away at this stage.

So, for the first time since 2004/05, neither Lionel Messi nor Cristiano Ronaldo will be in the Champions League quarter-finals.

Liverpool have beaten a German side in the last 16, while struggling in the league and with the final to be held in Istanbul.

We were outside of Top 4

Final was in Istanbul pic.twitter.com/rTpcRiav9S

Can we do it again? Rio Ferdinand doubts it is possible with the Bolton Baresi and the Turkish Wall in defence. But then again, who was in the side in Istanbul?

Rio Ferdinand saying we can’t possibly win the Champions League with Phillips and Kabak. We won it with Traore and Biscan, don’t tell us what we can’t do