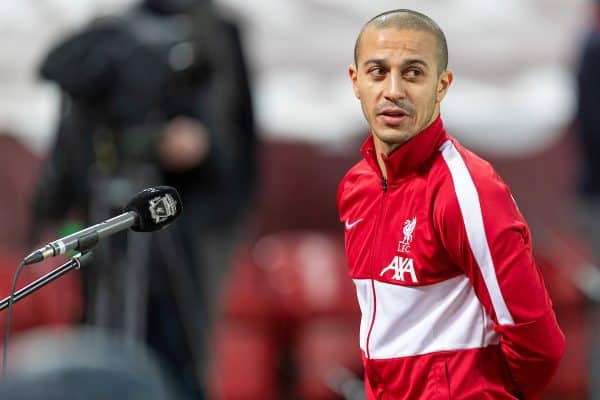 Liverpool midfielder Thiago Alcantara admits the players could not imagine in their “worst nightmares” how the club’s Premier League season has gone so badly wrong.

However, he believes progress to the Champions League quarter-finals can help turn things around quickly after a 2-0 second-leg win over RB Leipzig in Budapest gave them a 4-0 aggregate victory.

That is in stark contrast to their domestic form, where an unprecedented six successive home defeats have contributed to a run of just 12 points from the last 42 and torpedoed not only their title defence, but severely damaged top-four hopes.

Liverpool currently sit eighth, seven points behind fourth-placed Chelsea, but the Spain international believes a European morale boost is the pick-up they need.

“It’s been a tough period for all of us because we didn’t expect in our worst nightmares we would be in this position in the Premier League but we try to perform as best we can and try to get better,” he told LFCTV.

“After this performance it is positive for all of us.”

Manager Jurgen Klopp also hopes progress to the last eight for the third time in four years of a tournament they won for a sixth time in 2019 can kickstart their faltering form.

“It will help, that’s how it is. It will help but we know that Monday at Wolves is a different kind of game,” he said.

“But if we play as good as we played [against Leipzig] then it will be tough for Wolves, that’s clear.

“We played a really good first half but we didn’t score with really big chances. The game was a little bit like a summary of our season: so we are good, we create chances but we don’t finish them off often enough.

“But then we had the second half and used it there, that’s all fine. It’s much better than if we would have lost and would have been out of the competition – that wouldn’t have helped at all.

“But that [win] can help and we can see on Monday how much.”

It is too simplistic to lay the turnaround in performances at the feet of one player but the return to midfield of Fabinho was a key factor.

The Brazil international started in his favoured holding role for the first time since the Merseyside derby in October, in which Virgil van Dijk’s season was ended by a knee injury and Fabinho was forced to deputise at centre-back.

With security he offers as one of the best in the world in that job, according to Klopp, allowed other players to flourish.

Not least Thiago, who has struggled in the Premier League since arriving in September from Bayern Munich due to after effects of Covid-19 and a knee injury and who is far more suited to European football.

“It helps when Fab can play the six, it gives Gini freedom, Thiago did well, and the front three worked well together,” said Klopp.

“Thiago was good. I assume when you all look at Liverpool [and their problems] people say it’s to do with Thiago or whatever – that’s rubbish.

“For the players who were new always needed time to get used to our gameplan but Thiago doesn’t have that but he improves week on week and it is not a short-term project, it is a long-term project and it was good.”