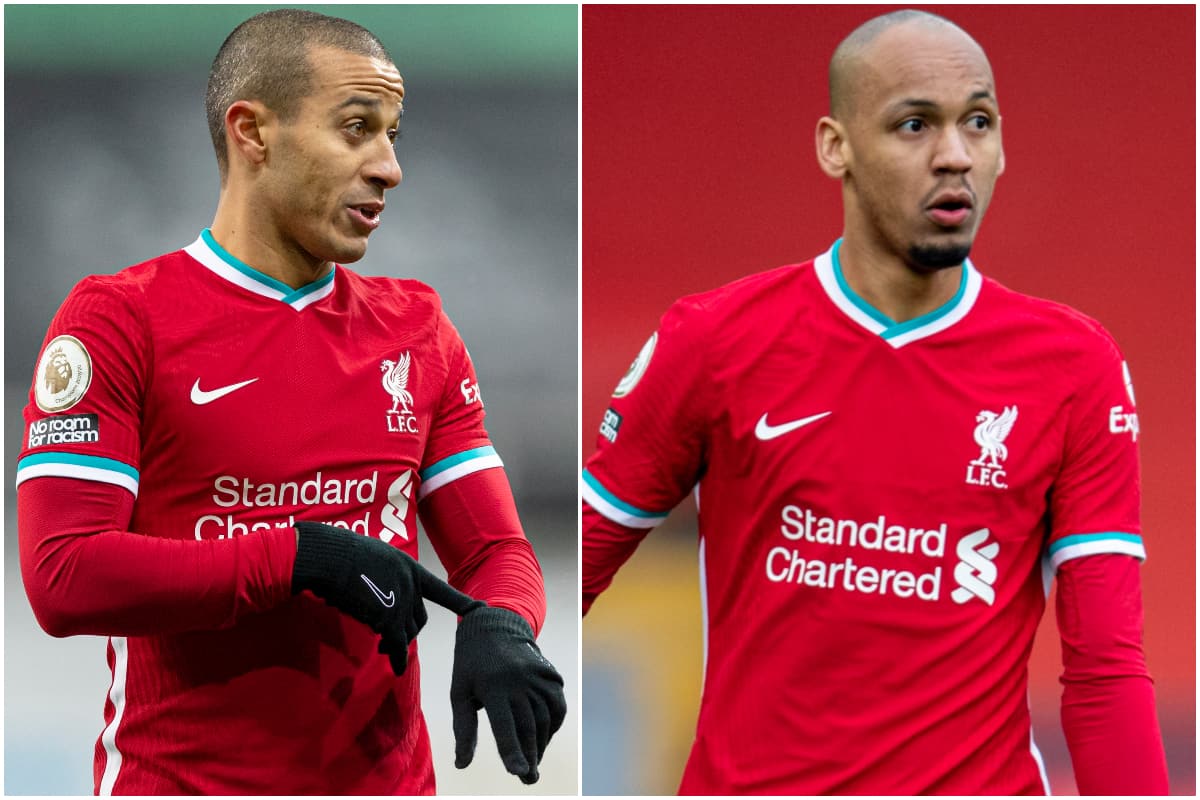 Thiago has welcomed the return of Fabinho alongside him in midfield, having admitted he is “not happy” with his form in the first months of his time at Liverpool.

When Thiago arrived on Merseyside he was lauded as a player who could boost Jurgen Klopp‘s side further as they defended their Premier League title.

That has not panned out as expected, however, with the Spaniard suffering a long-term knee injury and a bout of COVID-19, all while Liverpool struggled with a host of absentees in defence and midfield.

Fabinho returned to his natural role in the middle of the park in Wednesday’s 2-0 win over RB Leipzig, which freed Thiago of much of the defensive responsibility that has restricted him during the Brazilian’s time filling in at centre-back.

It was closer to the player supporters hoped for when Thiago made the £25 million move from Bayern Munich, and speaking to LFCTV, the 29-year-old reflected on his partnership with Fabinho.

“He’s a great player, he gives us a lot of confidence in our backs and it’s awesome to play alongside him,” he explained.

“You can split up a bit, move on and moves some lines forward, and with that you can be more confident in playing with the strikers.

“You are always near the goal, you can create chances, you can score, so it’s a nice position as well.”

Thiago gave a separate interview to TNT Brasil – in his native language, having been born to Brazilian parents – and admitted his difficulty in adapting to his new club.

Interestingly, he touched upon the criticism he has received from ex-players and fans alike, but focused on his own appraisal, saying he is “not happy” with his start to life at Anfield.

“In general I don’t read what is written about me. Criticism or anything. I don’t read certain things, even though I know I’m being criticised,” he said.

“I myself am not happy with how I have played since I joined Liverpool.

“New club, new environment. I had a serious injury, I needed to get back to the pace of the match. But this is not an excuse.”

With it likely that Klopp keeps his faith with Nat Phillips and Ozan Kabak as his centre-back partnership, Fabinho could be afforded an extended role as No. 6.

This in turn will benefit Thiago, and the hope is that the Spaniard is then able to showcase his talents to the best of his abilities – which will no doubt be a major lift for Liverpool.