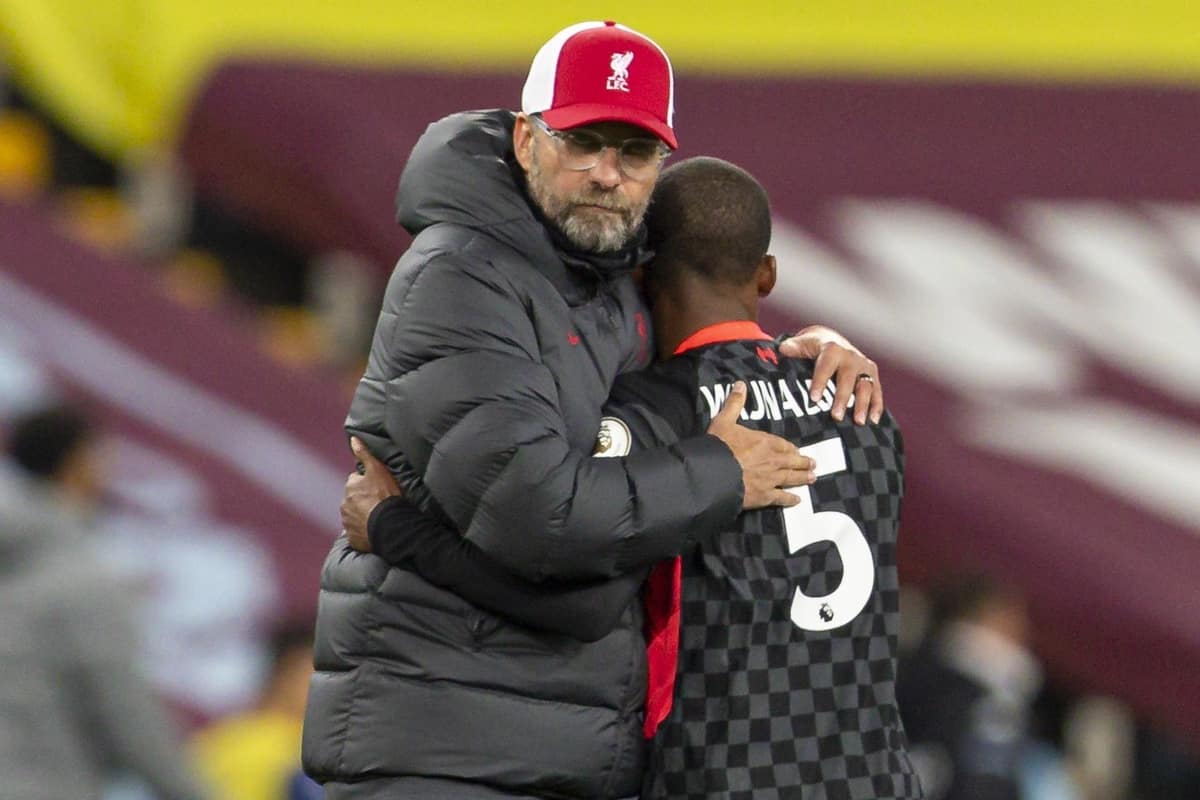 Jurgen Klopp has told his side to “put things right” when they welcome Aston Villa to Anfield this weekend following their capitulation against the midlands club earlier this season.

The Reds were left shellshocked at Villa Park in early October as an Ollie Watkins hat-trick and a brace from Jack Grealish, who assisted three other goals, helped Dean Smith’s side record a scarcely-credible 7-2 victory.

It is a loss that lingers in the memory for Klopp, who dismissed suggestions a 4-1 FA Cup win in January counted as any sort of payback as Villa fielded an academy side following a COVID-19 outbreak among the first-team ranks.

“No, we played a different Aston Villa that night,” he said.

“Of course we have to put things right, that’s clear. You cannot put a game like this to one side immediately, that’s not possible.

“The stranger the result is, that doesn’t mean it gets more necessary to work with it but in this case, for sure, we spoke about it quite frequently.

“Things like this should not happen but it happened to us. It was a really strange game. I have the game in my mind and which way I will use it I am not sure yet but we have to put things right, for sure.”

Watkins’ treble in the fixture was something of a coming out party for the former Brentford striker, who has bagged 11 goals in 29 matches in his maiden season in the Premier League while he scored on his England debut last week.

His haul has helped Villa establish themselves in the top half of the table and, as they sit just five points behind Liverpool heading into Saturday afternoon’s contest, Klopp counts them as competitors for a European spot.

“Ollie is a really talented striker and the manager knew him from before, it was a really good signing,” Klopp added.

“He’s physically strong so he can keep the ball, he can jump high, he’s very fast. It’s a good package.

“Nobody has to remind me on how good he is, but how we always try to defend strikers is we try to avoid passes into the area and that’s for him no different than it is for others.”

Asked whether he views Villa as rivals for a European berth, Klopp said: “Of course they are.”

Liverpool will be looking to bounce back from a 3-1 defeat at Real Madrid in the first leg of their Champions League quarter-final earlier this week, when Naby Keita was withdrawn before half-time.

It was just the Guinean’s second European start of the season but the gamble backfired as he was replaced by Thiago Alcantara with Liverpool’s midfield in disarray.

“The substitution in the last game was a decision I made in that moment. We had to sort the game for us and it was difficult to do that without making a change,” added Klopp, who has no new injuries among his squad.

“After the game, yesterday, we spoke and everything is OK. I explained the decision and he accepted it, obviously, so now we carry on.”