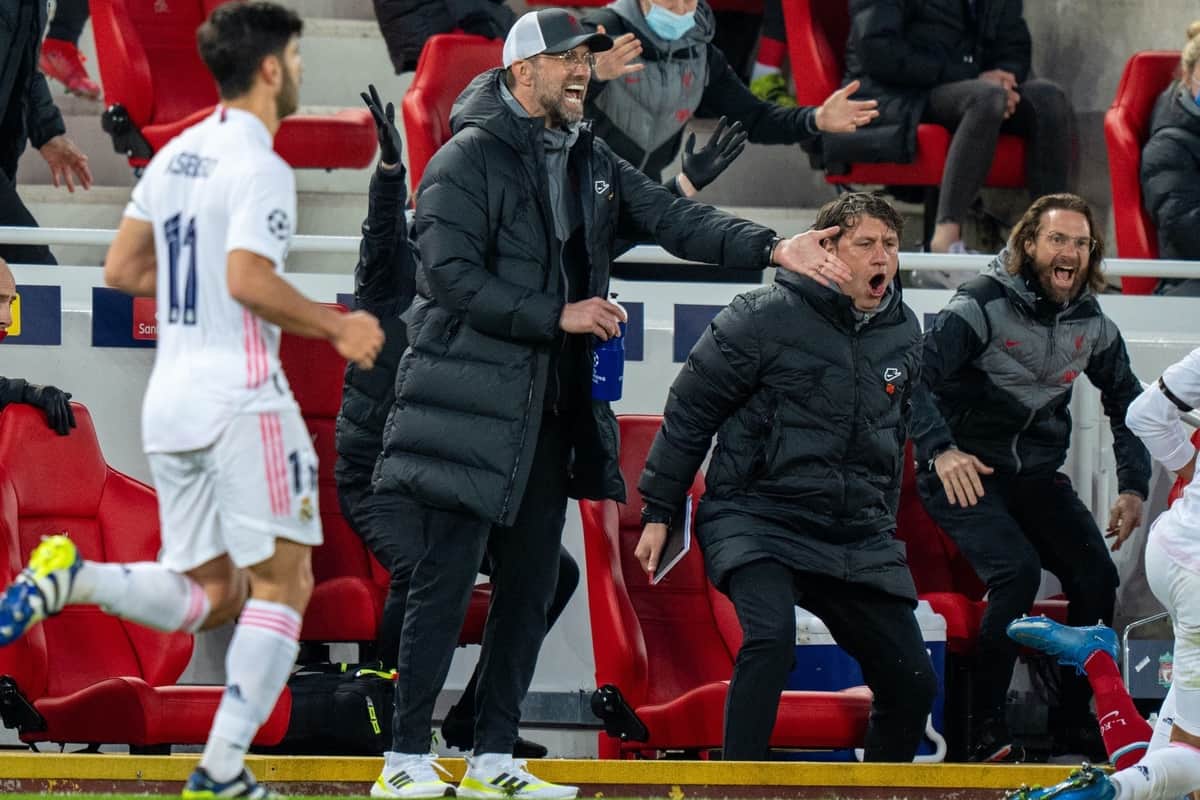 With Liverpool losing intensity in the second half of their costly 0-0 draw with Real Madrid, Jurgen Klopp has admitted his substitutions were “not exactly right.”

The Reds’ game plan was clear on Wednesday, with a full-throttle approach from the off as they chase the two goals required to take control of their Champions League quarter-final.

Klopp attempted to freshen things up throughout, with Thiago and Diogo Jota introduced on the hour and Alex Oxlade-Chamberlain and Xherdan Shaqiri given the final eight minutes as James Milner, Ozan Kabak, Sadio Mane and Roberto Firmino all came off.

Real dropped further back into their defensive third as the game wore on, and the intensity with which Liverpool began the game dissolved into the turgid play that has become worryingly familiar this season.

“Second half, after kind of 60 minutes then, they took a little bit of control. They had more of the ball,” Klopp told BT Sport after the game.

“We made the changes, and it was maybe timing-wise not exactly right. We wanted to have fresh legs but now we didn’t come through that well anymore.

“In the beginning, we didn’t try it in these moments, to pass the ball into their feet around the box, you just had to play.

“We needed the width, so whoever is there – Mo, Trent, Sadio, Robbo – the rest are in the half-spaces; play there, offer the runs and let them run.

“With their man-marking system, the first-half situation when Sadio slipped when he was in front of the goalie and there was no offside, that’s how they defended.

“You need to force these situations more often.”

It was not the first time in a tie that Klopp’s selection made a negative impact, with the decision to start Naby Keita in the first leg in Madrid proving hugely detrimental.

That Thiago, Jota, Shaqiri and Oxlade-Chamberlain were not able to change the game speaks to the quality of the opposition, but also perhaps the questionable management of their minutes in the buildup to the game.

Oxlade-Chamberlain, for example, had played just eight minutes in the month prior to Wednesday night, while Shaqiri was in a similar position with 18 minutes and Thiago was making a third cameo from the bench in a row.

As Milner – who started the game as captain – agreed in his own interview with BT Sport, the need for Klopp’s substitutes to find their feet saw the Reds “lose their way.”

“Maybe with a few of the substitutions sometimes you lose your way for a few minutes until the guys get into the game and stuff like that,” the 35-year-old said.

“It maybe just cost us a few minutes of time. But we came again and had chances once the boys came on and felt the tempo of the game.”

Though it was not the main factor in Liverpool’s inability to overturn the deficit at Anfield, it is certainly interesting that both Klopp and Milner believe the second-half changes cost them.