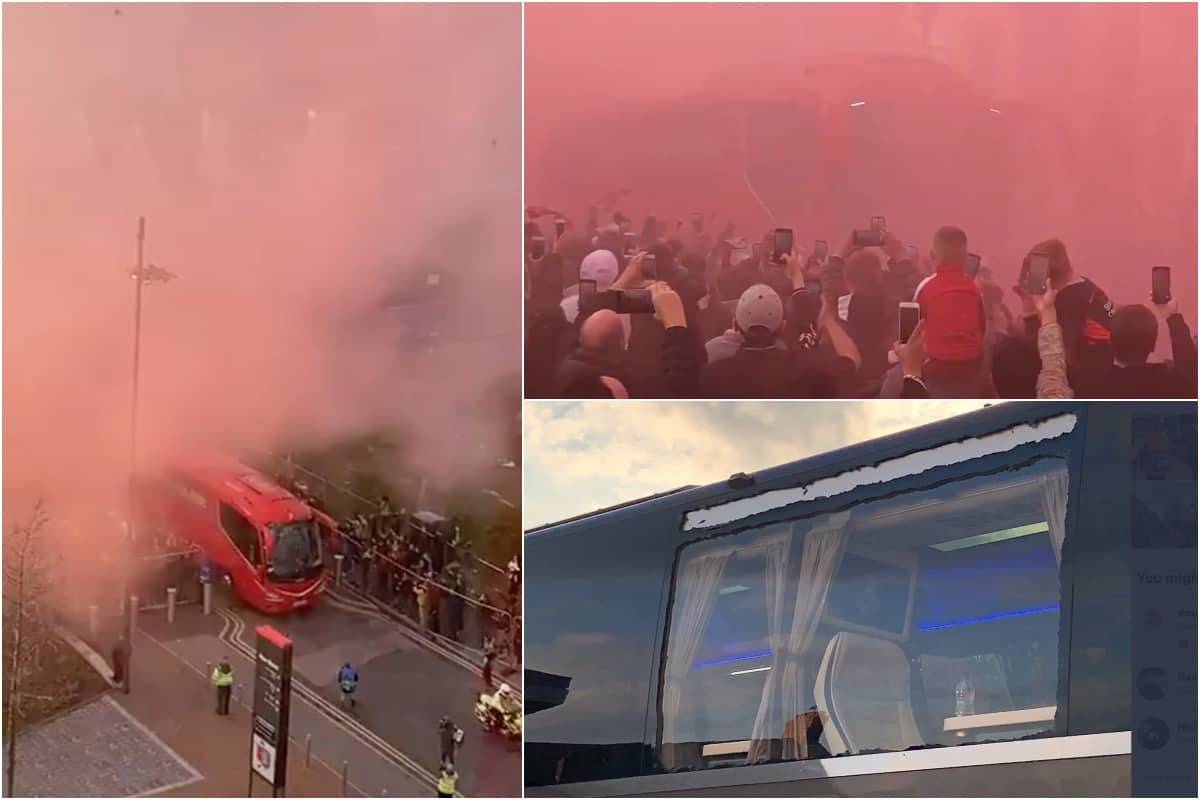 Pyro and a line of Liverpool fans greeted Jurgen Klopp‘s side upon their arrival for an all-important clash at Anfield tonight, but Real Madrid’s bus was foolishly damaged.

There’s no denying the challenge which lay before the Reds tonight as they look to overturn a 3-1 deficit against Real Madrid, a job which will be undertaken without the famous Anfield atmosphere.

With fans now able to attend outdoor beer gardens at the many pubs on Anfield Road, they were waiting pre-match on Anfield Road itself for a small gathering of colour.

While unable to walk through the turnstiles, Anfield Road was lined with fans on both sides as red smoke filled the air and chants were dusted off.

Klopp knows the power of the Liverpool faithful and while they cannot be in attendance tonight, his side know exactly who they are fighting on behalf of.

“I’m not a believer in promises when it comes to results, but I can say with certainty we go out there to fight for all our supporters as if they were with us,” the manager said in his pre-match notes.

Meanwhile, inside Anfield the stadium music pre-match was louder than usual, at the request of the players.

And fans let Liverpool know they are right there with them pre-match:

when the liverpool bus arrived pic.twitter.com/SXt9dTF1eB

However, the welcoming party did have a sour note to it is as Real Madrid’s bus was needlessly damaged on its way to the stadium, with one of its windows smashed.

And the scenes should in no way be overlooked, with the actions of the few tainting the good intentions of others:

Liverpool released a statement on the incident, saying they “condemn unequivocally” the actions of those involved.

“We condemn unequivocally the actions that led to Real Madrid’s team bus being damaged during its arrival to Anfield,” the statement reads.

“It is totally unacceptable and shameful behaviour of a few individuals. We sincerely apologise to our visitors for any distress caused.”

Turning attention back to the pitch, Liverpool know a 2-0 win tonight will be enough to send them to the semi-final – but can they get themselves over the line?