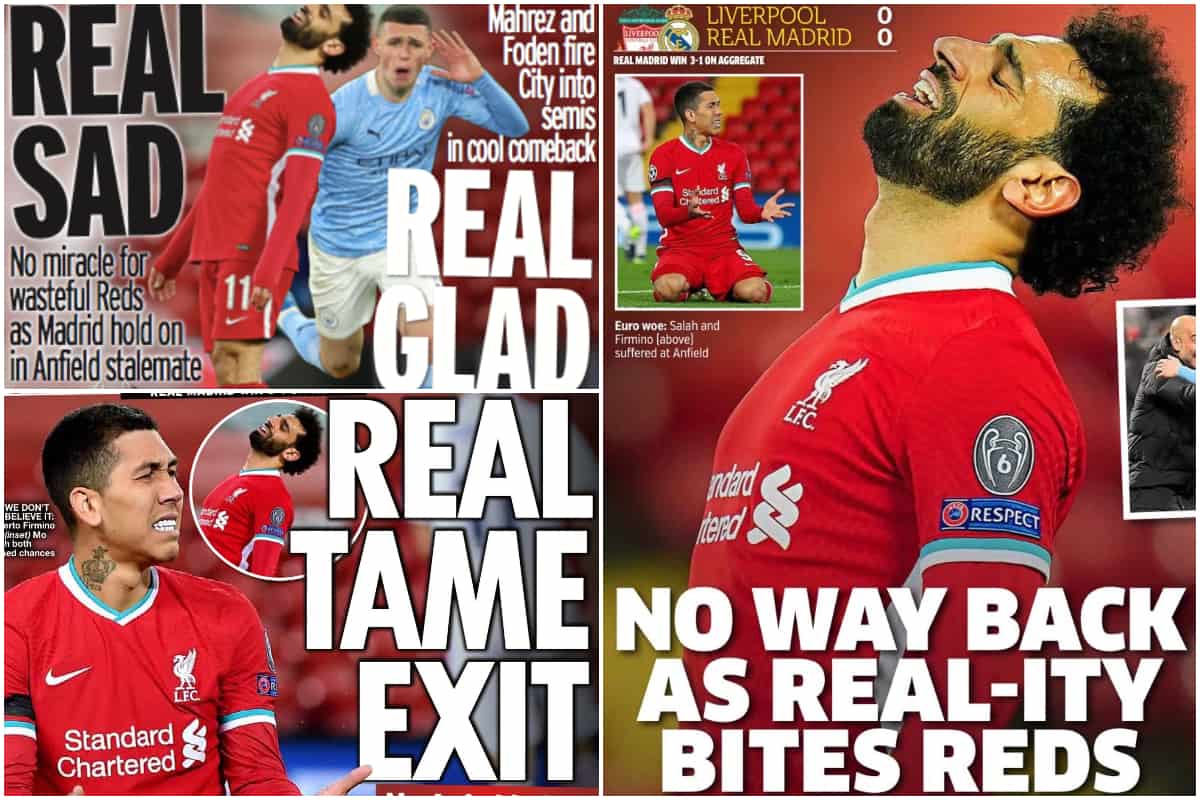 The media were critical of Liverpool’s second-leg finishing and first-leg performance after the Reds exited the Champions League at the hands of Real Madrid.

The Reds were unable to add another famous European comeback to the collection as overturning the costly first leg in Madrid proved a task too far.

There will be a sense of regret for Jurgen Klopp’s men as some brilliant chances were passed up on the night, but Zinedine Zidane’s side ultimately did enough to prevail at Anfield.

All hopes of securing Champions League football for next season now rest on a top-four finish, and Liverpool must be ready for a big push to get over the line in the final seven games.

Here’s how the media assessed the quarter-final defeat.

BBC Sport’s Phil McNulty, along with every reporter, bemoaned yet another night of poor finishing from Klopp’s men and assessed this as Liverpool’s undoing:

“Liverpool gave it everything for the 90 minutes but it was the lack of cutting edge that has characterised so many of their Anfield displays this season that removed any hopes they had of turning this tie around and proved their undoing.”

However, for Neil Jones, writing for Goal, the bigger issue was the costly first leg in which the damage was done and left the Reds facing too big a task:

“That was where the damage was done. How Klopp will regret the way his side started that game; passive, nervous, disorganised. How he will rue the way, having clawed their way back into the tie through Mohamed Salah’s away goal, they ceded control so quickly.

The Liverpool Echo’s Paul Gorst thinks the Reds’ biggest regret upon exiting the prestigious competition will be the manner of the defeat in the Madrid first leg:

“Perhaps what will rankle the most when the post-mortem begins was how Liverpool froze inside the modest setting of the Di Stefano Stadium last week.

“It left them with too much of a hill to sprint up when they were already hamstrung by the absence of their supporters.”

The Mail’s Martin Samuel felt Real Madrid were just superior over the two legs as they played with an expertise and experience beyond Liverpool’s to keep the Reds at arm’s length:

“And ultimately, it was Madrid’s experience that showed. Not that Liverpool lack it after their past successes, but this Madrid squad is unique in the way it has dominated the Champions League in recent seasons.

“Players like Benzema and Modric have been champions of Europe as many times as Liverpool across 43 years. Madrid drew on these memories as they resisted Liverpool’s pressure, intensity and physicality in a way rivals could not. They weren’t the better side on the night but they were across two legs – dominating at home and then standing strong at Anfield.”

Jones thinks Klopp and the players can at least take heart from the display, as the “desire was there”:

“They had a right go, at least. Their performance was levels above the one we saw in Madrid – although it had to be, in all fairness. Klopp could not fault his players’ effort, their belief or their heart.

“Liverpool’s desire was there, their pressing sharp and their aggression clear.”

The Telegraph’s Jason Burt wrote that this was the night the “real Liverpool” returned and felt the performance was a complete as it could have been, even if the fans were present:

“This was finally the “real” Liverpool as they pushed relentlessly and will wonder just how they did not score in their attempt to not only reach the last four but also avenge the 2018 final.

“So much is made of absent fans but, really, it is hard not to envisage them making a difference with this one.”

The Independent’s Melissa Reddy expressed regret that Liverpool didn’t produce such a performance in the first leg, pointing out how the Reds did more in the first 15 minutes at Anfield than in 90 in Madrid:

“The plan was to make Real as uncomfortable as possible on the pitch, not prior, and the team delivered during an aggressive opening 15 minutes.

“Liverpool offered more in that spell than they did during the entire first leg. They pressed intensely, covered well in defence and created big chances with Zinedine Zidane’s men on the ropes.”

Ian Doyle of the Liverpool Echo assessed the performance as the best the Reds have produced at Anfield this season and thinks a top-four spot can be won if this level is maintained:

“Liverpool played well, arguably their best display of a fitful campaign on their own turf.

“That top-four place remains an attainable target. If Klopp’s side can maintain this standard between now and the end of May, they will have every chance of making their absence from the Champions League a short one.” 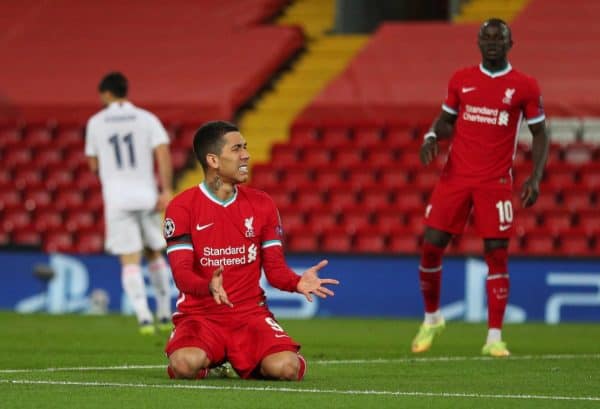 The Press Association’s Carl Markham pulled no punches as he apportioned the blame to Liverpool’s forwards for their poor finishing:

“They created enough chances to have clawed back the two-goal deficit but goalkeeper Thibaut Courtois was hardly extended as yet another wasteful performance from their forwards proved costly with 15 attempts producing just four on target.”

The Telegraph’s Oliver Brown was particularly disappointed with Mohamed Salah, noting that the Egyptian failed to deliver when it mattered most:

“The only criticism was that they needed their Egyptian king, the player who since 2017 has averaged more than 30 goals a season as a winger, to deliver when it counted most.

“Salah, just as in the first leg, was sharp, neat and incisive in almost all he did. The trouble came when he tried to plunge the dagger.”

Burt thought Klopp made the wrong call in not starting Diogo Jota:

“Klopp may wonder whether he should really have started with his most in-form forward, Diogo Jota. It will hurt that for all their effort they did not score.”

The Mirror’s David Maddock pointed the finger at the front three and thinks there is reason to be concerned on whether they remain up to the job of taking the Reds forward:

“But they were undone by some panicked finishing, and an obvious lack of belief in front of goal. Now the focus must turn to their attacking players, where for so much of this demented Liverpool season it has been on a feeble defence.

“The back line was solid enough, Alisson only called into action once, with a fine double save, but the forwards were not up to the task. The question is now one of short term blip, or long term malaise?” 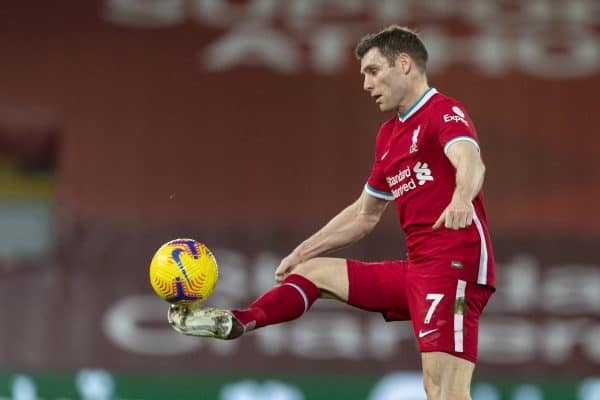 Turning the focus to other individual performances on the night, the Mirror’s Mark Jones thought James Milner impressed and believes that Klopp should utilise the 35-year-old more regularly:

“There has been a compelling case to use Milner – 35, for we have to mention his age – more often from the start of many of Liverpool’s games this season when intensity has been an issue.

“Taking the captain’s armband and clearly told to put 90 minutes’ running into an hour, he took the fight to Real and got in the faces of the opposition from the off, while he was another Liverpool player who was unlucky not to score in the first period.”

And the same reporter Jones thought Gini Wijnaldum was also excellent and handed a reminder of the quality Liverpool stand to lose if the Dutchman does leave Anfield:

“The midfielder showed just why he belongs in the company of the very best in his position in the game – three of whom were on the opposite team – as his intensity helped drive his side on in the first period.

“It seems more than likely that this will be his final Liverpool season, but when it comes to the Dutchman the Reds could well be guilty of forgetting what they already have as they look to the future. There is much more to his complicated contract negotiations than that of course, but the forthcoming parting of the ways still looks to be regrettable.”