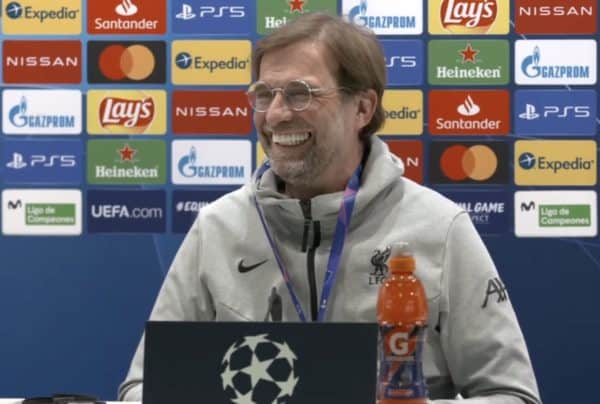 Jurgen Klopp spoke of his determination to show the fans that Liverpool are “still fighting” for all that is on offer as they aim to topple Real Madrid in the Champions League.

Liverpool’s season has been one of many troughs and not as many peaks, with setback after setback flying in Klopp’s direction.

But the Reds have found their footing of late to win three on the bounce and have now pushed themselves to within two points of the top-four in the Premier League.

That, in conjunction with a quarter-final tie against Real Madrid leaves plenty for Liverpool to fight for in 2020/21 and that’s exactly what Klopp wants to do.

And fans are at the top of the agenda as the Reds look to flex their muscles on the European stage in addition to giving it their all on the domestic front.

“I’m not so determined to show the world how good we are, I want to show our fans we are still fighting. That’s much more important to me,” Klopp told reporters.

“If people think because we don’t have a good situation I am a worse manager, I don’t like that but I don’t care.

“We have had some problems, but it’s not about that. It’s about wanting to get whatever is possible out of this season.

“You create the basis and then there is the finishing part of the season. We have created a better basis in previous seasons, but we are still in the fight and all of a sudden for Champions League spots as well.

“Honestly, I gave an interview after the Leipzig game and I thought it doesn’t look likely for us that there is any chance to qualify through the league for the Champions League and all of a sudden we are now two or three points behind.

“That is, of course, now possible with the games we have, even when we have a really tough programme. But things are in the flow and we have to keep contact with that and we have to chase the team ahead of us, and chase Real Madrid.