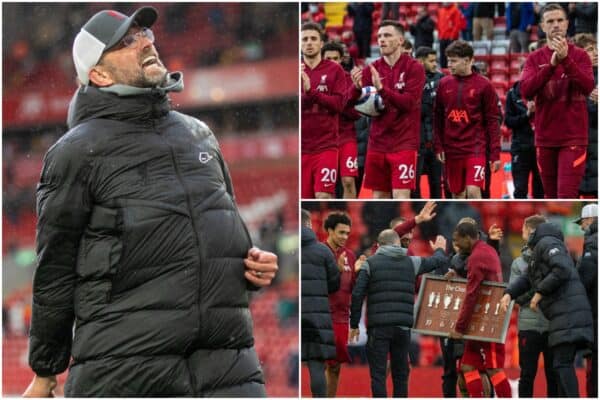 After an exhausting campaign, Liverpool were energised by 10,000 of their own to qualify for the Champions League with the unlikeliest of third-place finishes.

It was a massive afternoon for the defending champions, who just needed a win to all but guarantee a top-four finish with the outgoing Roy Hodgson’s Crystal Palace in town.

Liverpool may not have been at their absolute best, but they handled a nervy day impressively, getting the job done in professional fashion.

There were 10,000 fans back inside Anfield, making football feel like football again! And they had just the impact we knew they would.

Sadio Mane poked Liverpool in front at a time when they were finishing outside the top-four, celebrating in delighted fashion in the process with the roar of the crowd spurring him on.

The Senegalese had a below-par campaign by his world-class standards, but he would also bag the Reds’ all-important second of the afternoon to rid any lingering nerves.

But with the win all but sealed, it was the events in the final moments and after the final whistle that saw the day take an emotional turn.

Gini Wijnaldum would salute the crowd and receive a warm hug from Jurgen Klopp on what is expected to be his final game for Liverpool.

The Dutchman’s immense impact in a Liverpool shirt didn’t go unnoticed after the game with a guard of honour where he was presented with a Champions Wall plaque.

Klopp has shown what an elite manager he is at such a difficult time and he showed his love for the supporters in his typical much-appreciated post-match celebrations.

The players joined their manager for a lap of thanks, where smiles were aplenty and mixed with a few tears from our No. 5.

And the boss made sure retiring kit man Graham Carter earned a rapturous reception, in what was a lovely gesture.

That’s that for another season – Klopp, his players and us supporters have earned a breather. Probably in that order, to be fair!

To finish third, after such a demoralising campaign, really is a wonderful achievement and we know the Reds will be out for more next time around.