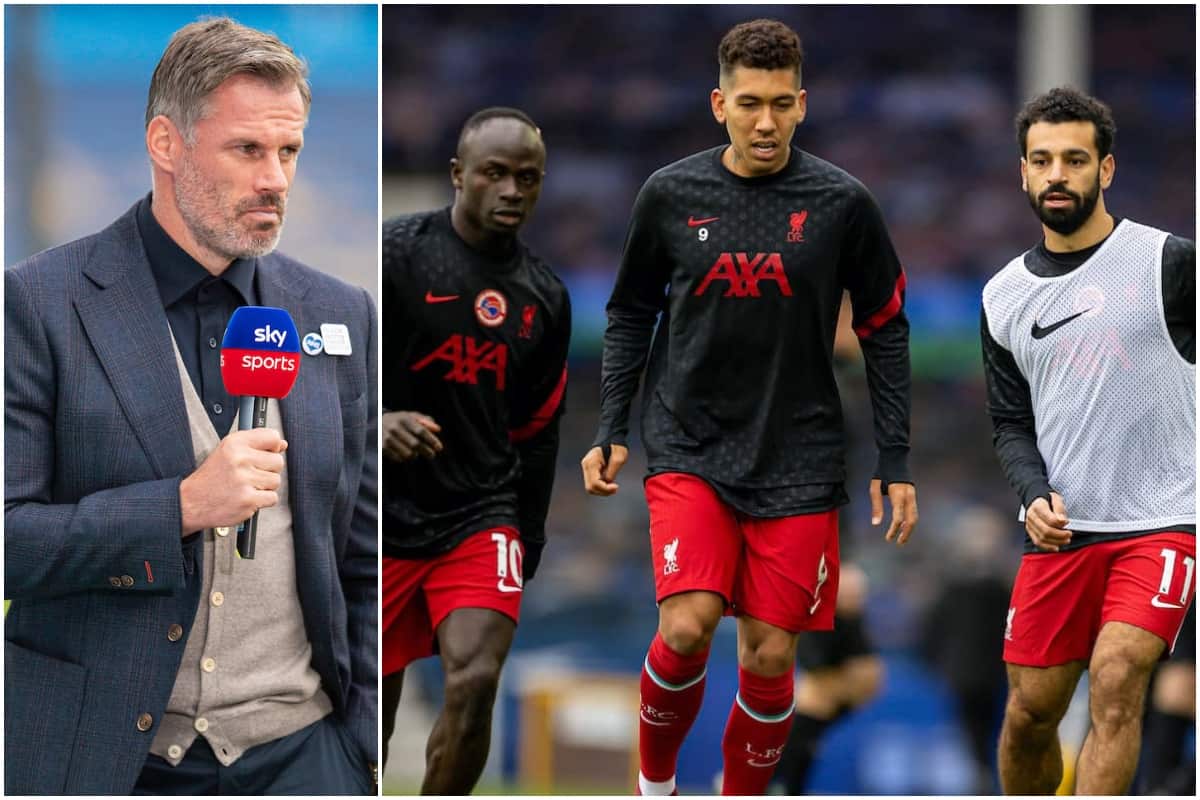 The defensive woes have been well documented but Liverpool’s “biggest problem” comes in the final third for Jamie Carragher, where the famed front three need “breaking up.”

It’s been the perfect storm for Jurgen Klopp in 2021/22, with the imbalance of the back-line seeing the dominos ruthlessly tumble to turn the season on its head.

But the last few weeks have been dominated by discussions over the frustrating inability to convert their chances which has left the Reds vulnerable and subsequently punished.

In the space of five days, Liverpool dropped four points as their wayward finishing kept both Leeds and Newcastle in the match, with only two goals scored from a combined 36 chances.

Klopp noted “that is obviously not enough” and that improvement is desperately needed, but for Carragher, it also signals a need for a fresh start with this the fourth season as a unit for the front three.

“People have talked about the forward line being out of form, but it’s been too long now for that [to be used as an argument],” Carragher told Sky Sports‘ Pitch to Post podcast.

“People keep talking about Liverpool’s problems at centre-back, but their biggest problem is at the other end of the pitch.

“We know that both Virgil van Dijk and Joe Gomez will be back next season. Liverpool’s famous front three, and rightly so, are still there.

“They’ve had the added bonus of Diogo Jota, who’s chipped in with a few goals, but I said this six months ago on Monday Night Football – the front three needed breaking up because no front three is ever together for this long.

“When you look at other great attacking partnerships and front threes from the past, they last probably three years and then you move on. Liverpool’s have been together for probably four or five years so it does need breaking up in the summer.”

The three have combined for 34 league goals in 33 games in 2020/21, as opposed to the 41 at the same juncture last season in an attack that has been freshened up by Diogo Jota.

But with the three all entering the final two years of their contract and edging closer to 30, further changes are required to freshen up the team and spark more competition for places.

“The front three have been amazing but it’s just at that stage now where it needs something else and it must be rectified in the summer when you think of the chances that have been missed this season.

“You have to move with the times, and an extra bit of competition up front wouldn’t go amiss.”

Despite misfiring, the trio have not felt the likes of Xherdan Shaqiri, Divock Origi or even Alex Oxlade-Chamberlain breathing down their necks and, at times, it shows.

The summer will prove telling for Liverpool’s evolution plans and irrespective of if any one of the front three depart or not, fresh blood could be just the ticket for the Reds to revitalise the team.