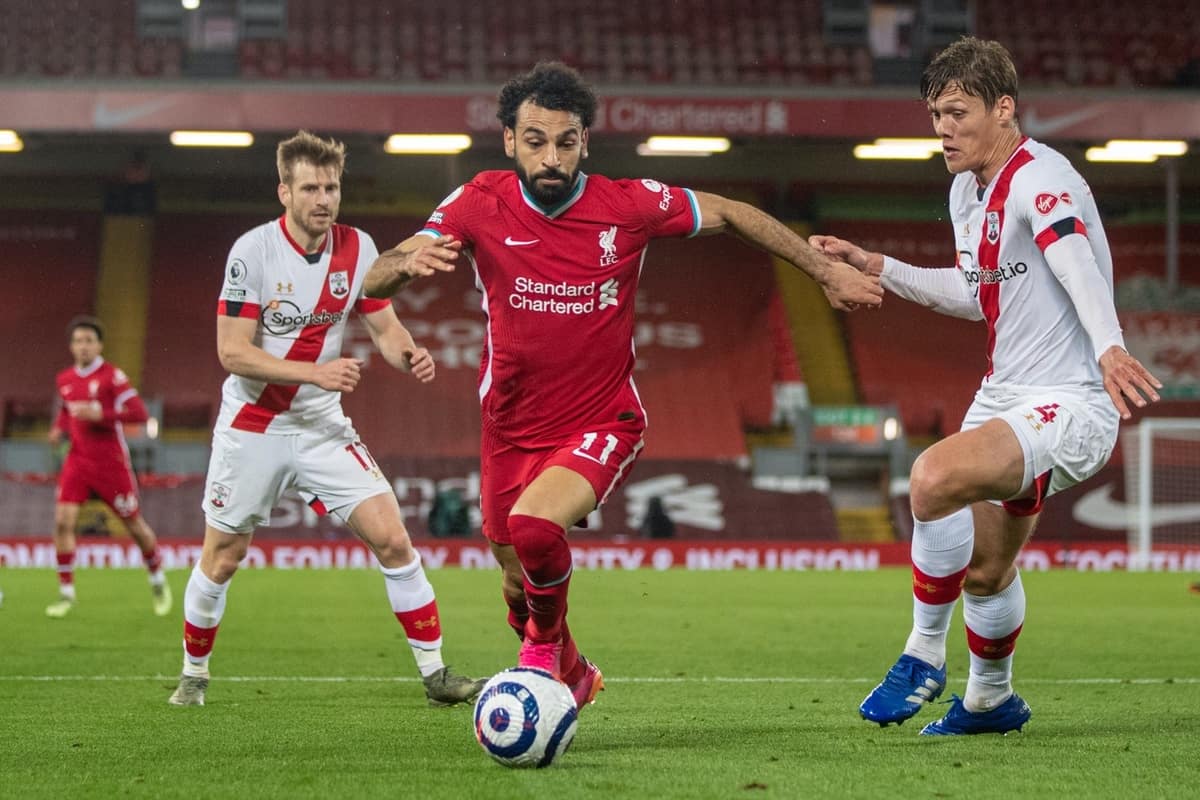 Liverpool have their foot back in the door as they push for a top-four finish, but the challenges loom large as Jurgen Klopp sets his sights on a perfect Premier League end.

It would be massively 2020/21 of us to take this outside chance of Champions League qualification into the final day, only to fumble it, just as supporters are allowed return to Anfield.

On the other hand, we might just do it, hugely winding up others as we do so.

A season of attrition, there are just four games remaining on a campaign where, as reigning champions, we have drifted through the loss to significant injury of an entire central defence and our captain.

We’ve seen our rock of a goalkeeper appear human, the relative loss of form of both our incredible full-backs and two-thirds of our enigmatic front three, plus more injury problems concerning Diogo Jota, the man that was signed to offer a compelling alternative to Mo Salah, Sadio Mane and Roberto Firmino.

Added to this, you can throw in Thiago’s arrival not proving as seamless as it might have been thanks to an early injury of his own and rarely having Jordan Henderson and Fabinho for midfield company.

It does not end here, either, as Naby Keita has still been unable to take flight, Gini Wijnaldum has flirted with the exit door and Alex Oxlade-Chamberlain has assumed the role Adam Lallana occupied towards the end of his time at Anfield.

Mad shapes have been tossed our way. We conceded seven at Villa Park and the owners of the club tried to attach us to a Super League, while our trip to Old Trafford last Sunday was postponed due to anarchy.

Throughout it all, we have had to locate mojo and momentum in empty stadiums. It has been football, but not as we know it.

What we are doing at the moment is trying to give ourselves as satisfactory a blank canvas for next season as possible, one that has all the basic ingredients we’ve become accustomed to under Jurgen Klopp: ambitions of winning the Premier League and Champions League.

As much of this work will be going on behind the scenes as it will on the pitch. Seeing Virgil van Dijk and Joe Gomez padding around a training pitch with a ball at their feet felt like reclaiming a bit of ourselves. It felt like a bit of ‘old normal’.

A win at home to Southampton felt a little like the ‘old normal’, but with a little bit of ‘new normal’ thrown in for good measure too. A goal for Mane, followed by a series of spurned opportunities, which left a pronounced sense of deja vu. What could possibly go wrong?

It took us until the 90th minute to ease any lingering notions of a Newcastle-themed self-destruction, albeit via offering the visitors the encouragement that such an event was always vaguely possible.

Not a vintage victory by any means, it was one where the big moments could have easily gone against us, but ultimately it was one where we prevailed with a clean sheet and three points, having shown glimpses of fine football here and there from most of the cast involved, while Nat Phillips met everything with a header.

He leaves you with the feeling that should he be called on the captain the team at some point, instead of shake hands with his opposing number and the officials he will extend his head towards them instead.

A sort of footballing tapas effect was at play, where the good was mixed with the bad, and it kind of reminded me of when the kids of the 1980s used to take some manky old lino out in the street, with a Sanyo tape recorder in the absence of a genuine boombox, and one-by-one attempted to out-breakdance one another…

You had to be there.

After a humongous period of disharmony and disarray that has not been the making of either Klopp or his players, Liverpool will need to embrace these last four games in a way that doesn’t fit in with how the rest of the season has developed.

Next up are Man United, yet beyond that also await the bogeymen of Sam Allardyce, Sean Dyche and Roy Hodgson. Win those four and I’m backing us to win the lot next season.

Time is ticking on though, and we will still be fortuitous to snare a top-four finish at this late stage, from the outside looking in.

Our next three are away, and while Leicester are beginning to perspire and face an unenviable last three games, West Ham have an impressively sedate looking run-in.

The prospect of David Moyes qualifying for the Champions League ahead of us is looming large. I will not know whether to laugh or cry.