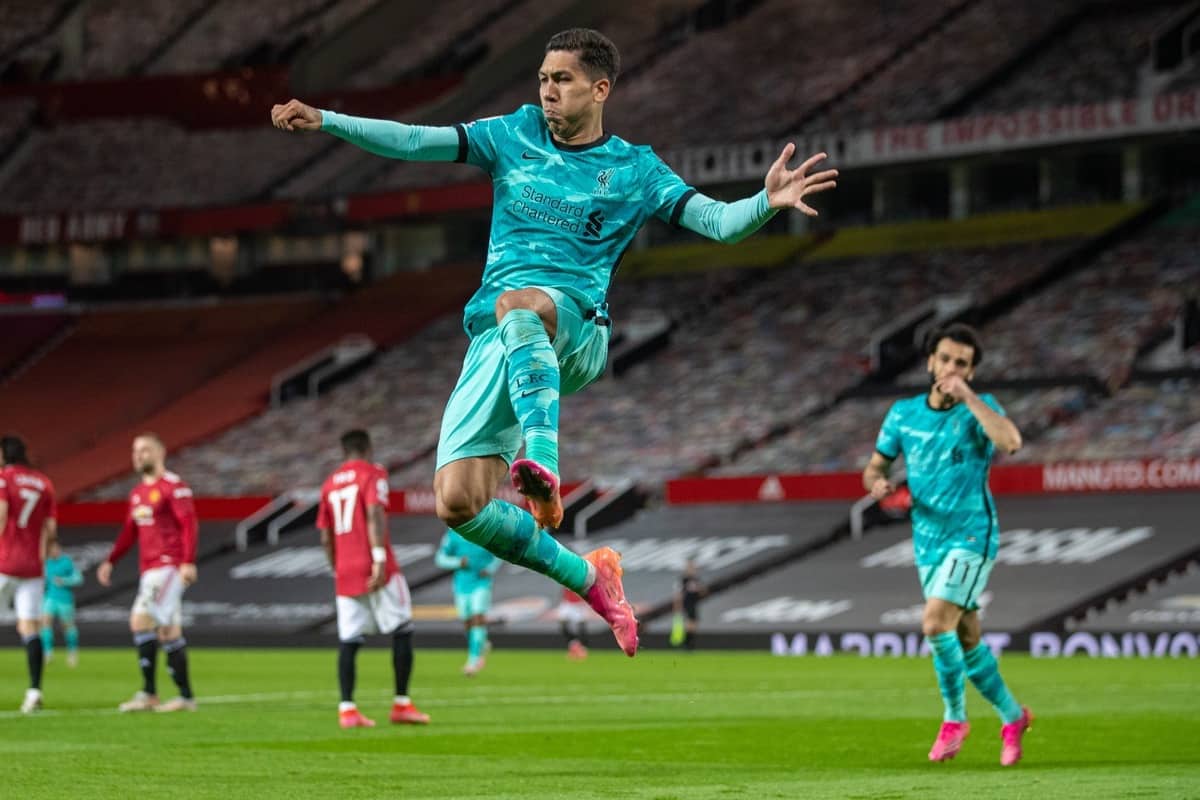 Liverpool had not won at Man United since 2014, but two goals from Roberto Firmino sealed a priceless 4-2 victory on Thursday, which could be pivotal in the top-four fight.

For the opening half-hour at Old Trafford, it looked as though the Reds would be limping their way out of the top-four race.

Roberto Firmino wasted an early chance to shoot when he was found by an exquisite Trent Alexander-Arnold pass, while Alisson almost gifted Edinson Cavani a goal with a careless pass towards Rhys Williams.

Then poor defending allowed Bruno Fernandes into space in the box, with the United playmaker clipping an effort with the outside of his boot which was diverted past Alisson via Nat Phillips‘ leg.

Phillips made it his objective to make amends, though, and after a penalty was overturned by VAR – following an Eric Bailly challenge on the 24-year-old – his determination teed up a brilliant equaliser through the inventive Diogo Jota.

And with seconds left on the clock before half-time, Firmino then put the Reds a goal up as he headed in Alexander-Arnold’s free-kick at the back post.

Before the game, Firmino had only scored six goals throughout the entire season, but within two minutes of the restart he had made it two on the night, capitalising on awful defending from United.

Fred, Luke Shaw and Dean Henderson were all culpable, with Alexander-Arnold benefiting as he fired a low effort which the goalkeeper spilled to allow Firmino to lift in for 3-1.

Jota then struck the post as almost everything looked to be going Liverpool’s way, but having failed to stretch the lead further the Reds then saw it halved as Cavani fed Marcus Rashford to fire through Alisson and in.

It paved the way for a heart-in-mouth end to the game, with Phillips and Williams combining to thwart a certain goal as they put their bodies on the line at the back.

Liverpool were able to weather the storm and pick up a huge victory at Old Trafford, with Mohamed Salah ensuring the result with a breakaway goal at the death – his 30th of the season.

Three more to go now, against West Brom, Burnley and Crystal Palace, if they are to guarantee at least fourth.