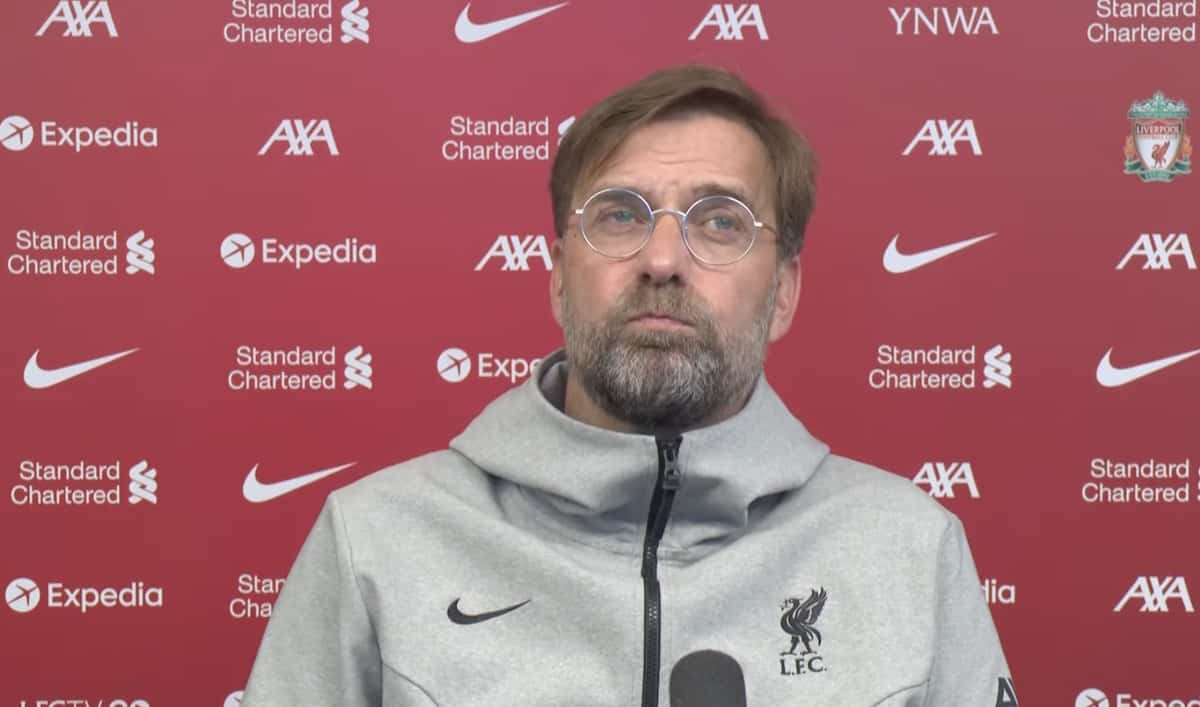 Liverpool manager Jurgen Klopp insists there is no animosity towards Manchester United boss Ole Gunnar Solskjaer for fielding a weakened team against Leicester as he would have done exactly the same.

The Reds boss is no stranger to fixture congestion, the club famously having to play two matches in successive days on different continents last season due to their involvement in the League Cup and Club World Cup, but blasted the scheduling of three United matches in five days as “a crime.”

So there will be no hard feelings from the German when he steps out at Old Trafford on Thursday for the fixture against United, rearranged after fan protests two weekends ago, despite Solskjaer’s decision making it more difficult for Liverpool to make up the ground for a top-four place.

“Not exactly what I expected but I knew he had to make these changes,” said Klopp.

“I said it 500 times that with all the things that happened, and the protests at Manchester, to play Sunday-Tuesday-Thursday is a crime. It is.

“But it is not the fault of Ole Gunnar Solskjaer and the players. My question to myself was: ‘Would I have done the same?’ Yes. You have to. You have to.

“We are late in the season, all the players played a lot of games. United went to the Europa League final so that means an awful lot of games and now you get Sunday-Tuesday-Thursday. That is not possible.

‘But the weekend after is a weekend off for United. I am not the guy who is doing the schedule and fixture list but when we thought about how it could work out there was no Tuesday and Thursday game and we would all have played all the games.

“You could have moved one West Brom game but that didn’t happen.

“The explanation from the Premier League was that no other team should suffer because of the things that happened in Manchester. Let me say it like this – that didn’t work out pretty well.

“A little bit West Ham, a little bit Liverpool. But if we don’t qualify for the Champions League it is not the fault of Ole Gunnar Solskjaer and his team selection or the Premier League, it is our fault.

“But in this specific case I think things could have been done differently definitely but we get more and more used to things that rarely go in your favour or direction.”

Liverpool return to Old Trafford 11 days after their match was called off after supporters protesting against the Glazer family’s ownership of United broke into the ground and picketed the team hotel.

United have beefed up security around Old Trafford and Klopp is not worried about their security.

“No concerns really. Nothing is in our hands in this perspective but we trust the authorities,” he said.

“We were not in danger last time when we were at Manchester. That was not about that, the supporters protested against some other stuff.

“I have no idea what will happen tomorrow night but I am not concerned at the moment.”

Klopp has set his side the target of winning their last four matches to stand a chance of sneaking into Champions League qualification, although they still require their rivals to slip up.

Current fourth-placed side Chelsea are seven points ahead, having played a match more, while Leicester, in third, are nine in front but have played two more games.

In such a situation it may affect Klopp’s tactics later in the game.

“Do we have to take more risks in the last few minutes if it looks a draw? It is possible,” he said.

“We are not that bad in the form table but there were two draws [against Leeds and Newcastle] where we lost the game in the last minute and that felt really harsh.

“We could never get that feeling of a winning streak. That is the situation. We know that. The plan is to give it a proper try tomorrow.”