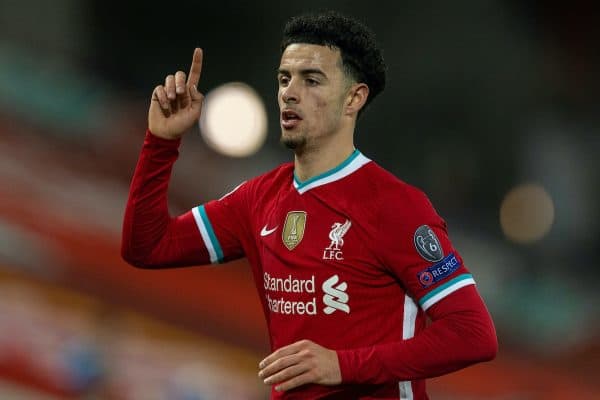 Curtis Jones has been nominated for the European Golden Boy award for 2021, joining the likes of Jude Bellingham and Bukayo Saka on the shortlist for the youth prize.

The Golden Boy award was founded by Italian newspaper Tuttosport in 2003, to honour the best player under the age of 21 in Europe’s top-tier leagues.

Journalists from England, Germany, Spain, France, Portugal, the Netherlands, Greece, Russia and Switzerland have since joined the voting panel, with a host of elite talents receiving the award.

Sterling is the only player to have done so while with Liverpool, though a number of young Reds have been included on the shortlist for the award throughout the process.

Neco Williams made the final 40-man shortlist in 2020, but is not even among the top 100 this year, with Jones the sole representative of Jurgen Klopp‘s side.

Bellingham could be considered the favourite for the award, with the 17-year-old establishing himself as a key player for Dortmund following his move from Birmingham City in 2020.

Last season, he made 46 appearances in all competitions, scoring four goals and laying on four assists, and his public admiration for Steven Gerrard has led to many Liverpool fans hoping he will eventually make the switch to Anfield.

While Jones may not be among the front-runners for the prize, his inclusion on the shortlist is still recognition of the excellent progress he has made as part of Klopp’s first-team squad.

The 20-year-old scored four and assisted five in 34 games last season, having only been left out of the matchday squad on three occasions due to injury.

Voting for the 2021 Golden Boy is now open, with the full 100-man shortlist available here.