After five years wearing the Liverpool shirt, Gini Wijnaldum is no longer a Red after agreeing to join PSG – and he’s already showing what we will miss.

The writing was on the wall over the future of the Dutchman for much of the season, with no progress on contract talks leading to an expected departure.

Barcelona had long been expected as the eventual destination for a reunion with former national manager Ronald Koeman, but Paris Saint-Germain took advantage of their slow movement.

A generous contract offer in a timely fashion turned Wijnaldum’s head and the reliable and versatile option for Jurgen Klopp will now call Parc de Princes home until at least 2024.

“I made another choice. It was very difficult. I was negotiating with Barcelona for four weeks, and we never reached a final decision,’ Wijnaldum explained his decision. 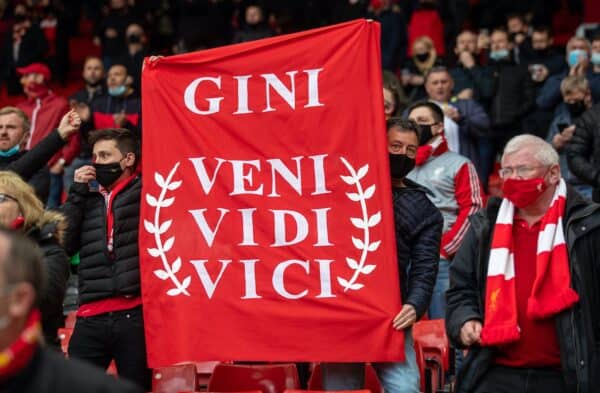 “Paris Saint-Germain were a bit better in making a decision. They were quicker. And the project that they have at PSG it really appealed to me.

“It was a difficult choice I have to be honest. I thought I would be moving to Barcelona because they were the only team who were really interested in me, but we did not reach an agreement together.

“PSG were much clearer in making that decision.”

It may be a decision the Catalan giants are to rue, and Liverpool too for letting him walk, as he showed his prowess for the Netherlands in their Euro opener on Sunday evening.

Wijnaldum played in a more advanced role, which is common for his national team, and had his hands all over the dramatic 3-2 win over Ukraine, with the captain netting the opener in emphatic fashion.

His tactical versatility makes him a handy weapon to have, with his prowess at shifting from one mindset to another a nod to his supreme talent which is set to make many sit up and take notice this summer.

But Barcelona and Liverpool’s loss is to be PSG’s gain.