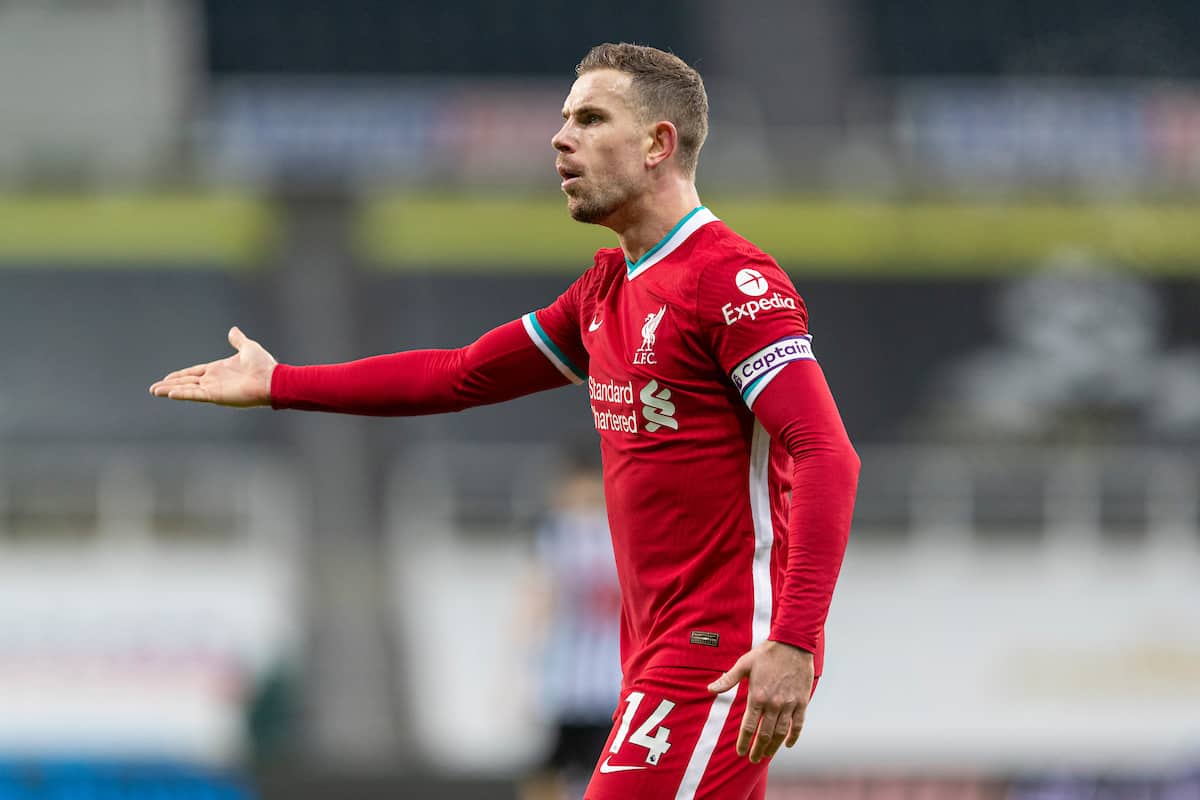 When Jordan Henderson signed his current five-year contract in 2018, it was seen as a deal that would allow the Liverpool captain to see out his peak years with the club.

By the time it expires in 2023, Henderson will be 33. At the time it seemed like the perfect deal for both player and club.

Henderson was to remain at the top of the game while he’s still at the top of his game, while the club tied down a player who is a key presence on and off the pitch regardless of whether he’s in the starting XI.

Since signing that deal, Henderson has gone on to lift the Champions League and Premier League with Liverpool.

If you’d have asked him what he hoped to achieve in those five years these trophies would have been at the very top of his list.

Perhaps the only way it could have gone better for Henderson in that time is if he could have repeated such feats with the national team, but England be England.

Despite this seemingly more-than-satisfactory state of affairs, the issue of a contract extension for Henderson has now been raised after a report by The Athletic suggested the captain wants to extend his deal beyond 2023. 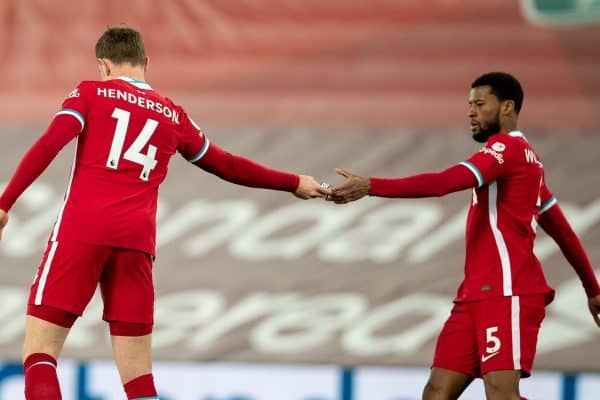 In the past couple of years, similar stories of Georginio Wjnaldum’s contract renewal or non-renewal lurked in the background and, in the end, the Dutch midfielder left once his deal expired this summer.

Given the type of player Henderson is and his role as captain, his own contract saga – or the potential for it to become one – will make bigger headlines.

This has already been the case since that report in The Athletic revealed talks between Henderson and the club aren’t progressing and other clubs are interested in his signature.

Why has this story emerged now? The various parties involved will have their own reasons – here’s a look at it from the point of view of each.

“There is no other place in the world I would rather play football,” Henderson said when he signed his current Liverpool deal in 2018. “I want to be here for as long as I can be.”

In October 2020 he reinforced this, stating that he felt he had plenty left in the tank: “I’m just turned 30 and I still feel about 25 physically and I feel as good as I’ve ever felt.

“I want to try to play as long as possible. I still love the game and I want to play for England and Liverpool as long as I can.”

Henderson will want to win more with Liverpool and fight for his place in the team. He’s always acknowledged that he welcomes such a fight for places as it means the squad is improving, and always looks to contribute even when injured or outside the XI.

He will also want assurances over his future and you’d guess this, for him, means a two-year extension and improved wages.

A playing career is short and this could be the last big contract Henderson signs so this is understandable, especially when, in theory, he could almost certainly get a better deal elsewhere were Liverpool to accept a transfer bid.

Which brings us on to…

Just like players, managers or anyone else involved in the game, different agents have different characteristics.

Some will seek regular moves for their players in search of extra fees, while others will be happy as long as their player is happy, even if that means they stay at the same club for most of their career.

Regardless of any of that, when it comes to contract negotiations the job of an agent is to get the best deal for their player.

It would be no surprise to hear that the publication of this story came from the agent’s side, after all, they might also be best placed through other agents to know which teams are interested in their client.

Both Henderson and his agent will know that a player of his experience and quality could get a better deal at another club, and it might be at the back of their minds that Liverpool won’t offer a lucrative contract to a player over 30.

Wijnaldum was proof of this, and having let his Liverpool contract run down, he now earns quadruple the amount at PSG. 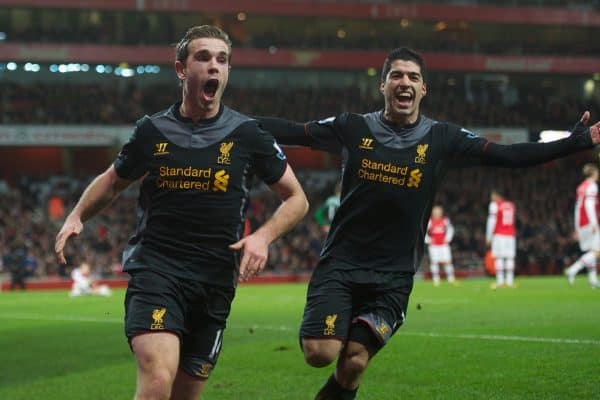 With that in mind, it’s also no surprise that with Henderson entering the last two years of his Liverpool contract stories have come out linking him with other clubs.

PSG, Atletico Madrid and Juventus have been stated as the clubs supposedly ‘monitoring’ the situation.

Extra realism has been added with the lines that PSG boss Mauricio Pochettino is a fan of the Englishman, while Luis Suarez would like to be reunited with his former team-mate at Atletico.

This also raises the possibility of a swap deal, as Liverpool have been linked with Atleti’s Saul Niguez. And the media love nothing more than to report on a swap deal.

Henderson’s leadership may not immediately transfer to a club in a different country and to a different dressing room, but his experience and work rate along with a good amount of quality means the suggestion that clubs on the continent are interested is believable.

If they were putting emotion aside, Liverpool’s sporting director Michael Edwards, along with his team of analysts and president Mike Gordon, would probably be suggesting that a 31-year-old with two years left on their contract should be sold in this transfer window.

They will no doubt recognise Henderson’s value beyond his data – they can’t have worked with Klopp for this long and not value this part of the game – and will also recognise his worth as a homegrown player.

At the same time, they probably don’t want to offer Henderson hugely improved terms on his current deal or a lengthy contract extension.

FSG won’t ignore such leadership traits but will see players like Henderson and James Milner on the books and then see younger, potentially better players who could come in on less money.

It seems there is already a contract offer ‘on the table’, which suggests they have a plan, but from their business perspective extending Henderson’s contract makes less sense than letting him see this one out or offering him an extension.

Selling him now, meaning they get some money to use as part of their sell to buy strategy, probably makes the most sense for them.

Henderson is Klopp’s reliable captain who brings the team together on and off the pitch.

The pair have a bond forged through the winning of titles as manager and captain, seen most candidly in their emotional embrace at the end of the Champions League final.

The manager may not always see Henderson as part of his starting XI and may regularly introduce new midfielders in the hope of improving the area of the team in which he plays, but the captain is always an important part of the overall plan regardless.

This meant the Dutchman’s departure was amicable, at least with regards to his relationship with the players and coaching staff, but a similar situation with his club captain could test Klopp’s acceptance of FSG’s methods.

When looking at each point of view individually, none of them are controversial or unreasonable.

Klopp recognises a leader and a personality. Serious, humble and supportive. And, most famously, sealing, observe and neighbourly.

The player wants a new deal with a club he loves but he and his agent also recognise, especially on the back of the Wijnaldum example, that a better deal could be got elsewhere.

The club know they need to refresh or revamp their midfield. They have been trying to do so for a few seasons now with varying success (see: Fabinho, Naby Keita, Thiago and links to a Wijnaldum replacement).

They also know Henderson missed the last 16 games of the 2020/21 season and has been increasingly absent through injury.

It all makes sense and, regardless of the outcome, each party should be able to take something positive from it.