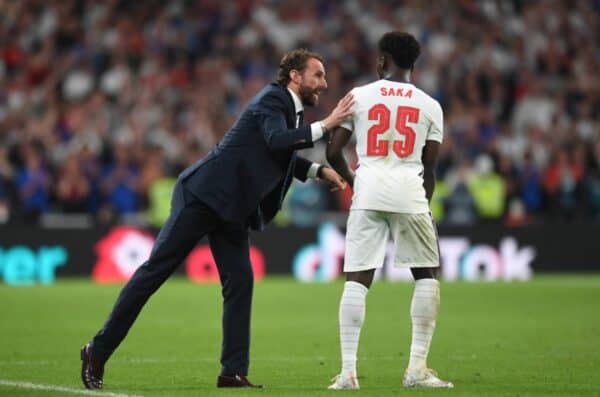 Support has come in droves for Bukayo Saka, Jadon Sancho and Marcus Rashford after they were subjected to abhorrent racial abuse following England’s Euro 2020 final defeat.

Imagine your team makes it to their first final in 55 years and when the result does not fall the right way countless think to go straight to social media to racially abuse players they are supposed to support.

It’s abhorrent and despicable, among other choice words and yet that’s what three young stars of the game are waking up to.

It’s incredibly sad to think that it will not be the first time either and that’s why England and many others continue to take the knee and stand against racism.

Saka, Sancho and Rashford were three England players to miss penalties in the shootout against Italy on Sunday evening, but they deserved nothing but support.

To think otherwise and direct racist abuse is despicable and they are not fans, just racists.

And Liverpool players past and present, including Steven Gerrard, Curtis Jones and Harvey Elliott, were quick to applaud the bravery of Saka for taking the crucial fifth penalty at just 19 and Sancho and Rashford for stepping up:

Nothing but bravery, courage and heart to stand up at the most important time. Hold your head high and be proud of yourself bro! @BukayoSaka87 ??

Respectfully. Stay off the booze or don’t go if you can’t help but fight at football matches and attack innocent people. Don’t tweet if you’re gonna racially abuse people. ?? is life I get it, but take a loss with pride. You don’t need to take it out on someone else.

And they weren’t the only ones as plenty showed their support and condemned the racist abuse that has become all too depressingly expected in moments such as these:

The lads from last night deserve better than this. They should be able to reach a final and not be subjected to the most foul abuse because of one kick of a football. They should be celebrated for the joy they brought do many of us.

Good to see the widespread support for Saka, Rashford and Sancho. If we really want to follow that up as media outlets, let's stop using Boris Johnson's condemnation without including the proper context of his own racist slurs that empower the people targeting young black men.

Our multi cultural team which took stand against racism before and during the tournament suffers racist abuse after losing our first final for 55 years. Let that sink If you were one of those who said racism isn’t a problem in this country but taking a knee was. #ENG https://t.co/A2uaOp9jje

Rashford, Saka and Sancho all come across as really lovely, caring young men as well as enormously talented athletes.

They're the best of this country, and anyone sending them abuse is the absolute worst of it.

Racist English fans. Rashford; Saka, and Sancho showed more strength of character in one short sporting vignette, than you will ever achieve in your pointless and now hopefully jobless lives.

Football can be so cruel.

But for your personality. For your character. For your bravery…

We’ll always be proud of you. And we can’t wait to have you back with us, @BukayoSaka87 ?? pic.twitter.com/a6fVTb0y1j

We’re disgusted that some of our squad – who have given everything for the shirt this summer – have been subjected to discriminatory abuse online after tonight’s game.

It’s sickening but the widespread support is what offers hope for the future.

But structural change and equality has to be at the heart of fighting systemic racism. And it will also require everyone to stand together and fight it.