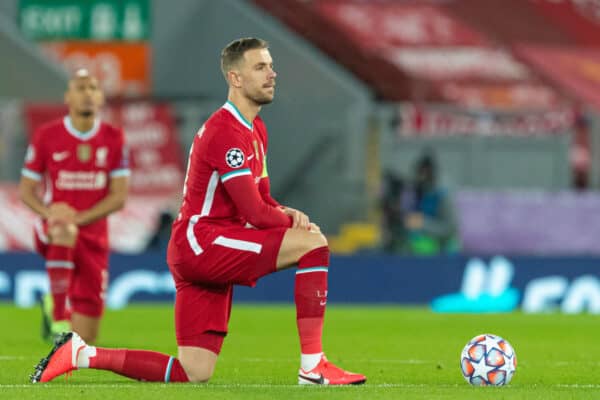 Premier League clubs will continue to take the knee for the 2021/22 season and the Liverpool captains are fully behind the gesture, saying there should be no debate about why players do so.

One of the many social initiatives players have been keen to get behind over the past 12 or 24 months has been to raise awareness and make their stance clear over racism in football and indeed anywhere.

It has been particularly prevalent on social media, where players have been roundly abused online after games, and Jordan Henderson made it clear that the intention from players remains the same: those attitudes have no place in the game and teams will continue to make their stance clear now that supporters are returning to stadiums.

“On behalf of all of the players at Liverpool, I want to restate our commitment to taking the knee in the Premier League this season and welcome the decision that was taken by the Premier League last week,” said the Reds captain.

“There has been unfounded debate about why footballers are continuing to demonstrate in this way but there should be none. It is very simple – we are protesting against racism. The question should no longer be why are we doing it, it should be why wouldn’t we? This is a necessary response to a problem that we know exists and which we also know should not be happening.

“So I’m proud of my teammates when we take the knee and I also couldn’t have been prouder to be captain of this club when our supporters applauded us as we did so.

“It is only by doing what is right and coming together that we can achieve positive change and it is in this spirit that we will carry on taking the knee.”

His comments were reiterated by LFC Women’s skipper Niamh Fahey, with the WSL, the Championship, the FA, EFL, PFA and other notable organisers within the game all backing the players’ approach.

“We saw even this summer around the Euros that the scourge of racism remains not just in football but in society. It shows, sadly, that the reason we took the knee last season remains every bit as relevant this season. It is our way of saying there is no place for racism or other forms of discrimination in our game, and that things must change.

“We will proudly wear the Take A Stand badges on our playing shirts this season and we know our supporters will be firmly behind us when we take the knee before our games.”

While the players’ approach as a collective is definitely to be applauded – and literally was in Liverpool’s last home game of last season – it remains on the public to be responsible for their own words and actions even as the world of football tries to lead the way.

A recent report showed that the UK was “by far” the origin of most racist and otherwise abusive tweets sent out in the aftermath of the Euro 2020 final this summer, where Bukayo Saka, Jadon Sancho and Marcus Rashford were all targeted after missing penalties.

With supporters now to return to stadiums in their droves, it is to be hoped that the example the players continue to set has even further-reaching effect in the bid to eradicate such hateful behaviour.