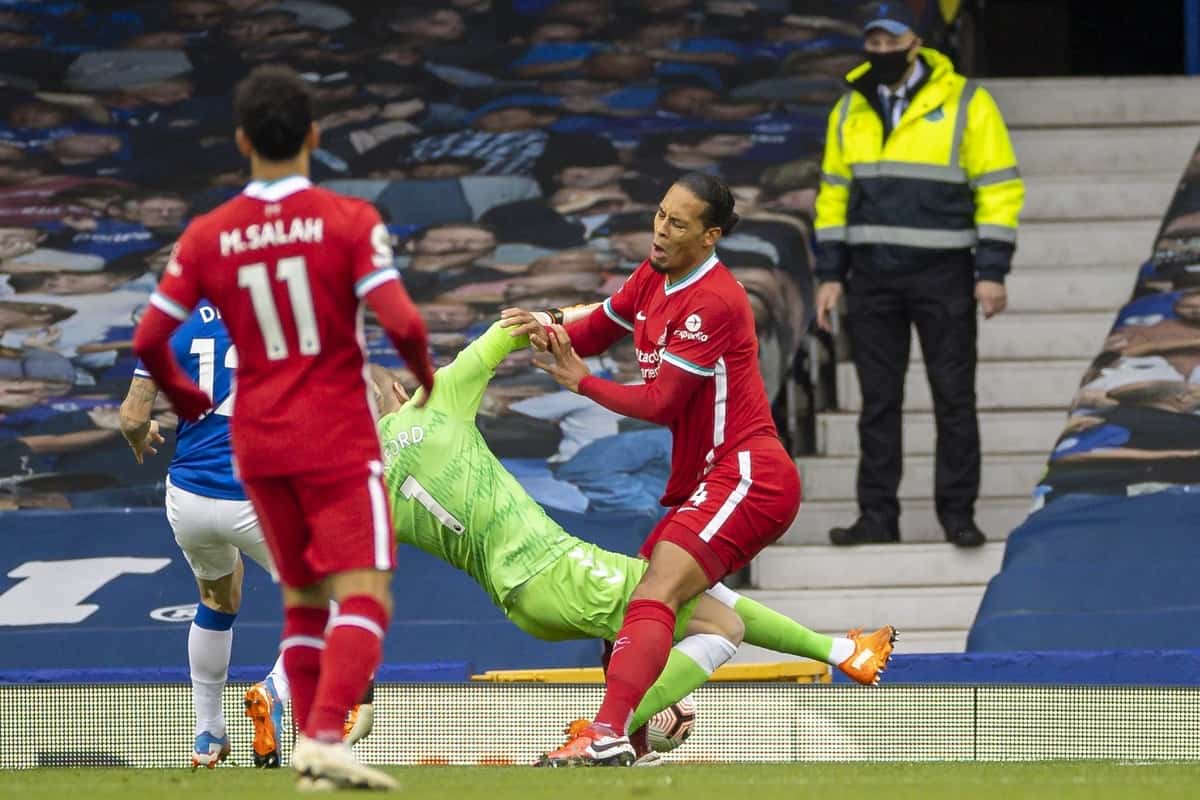 Had the new VAR offside protocols been in place last October, the Virgil van Dijk incident would have played out differently and seen Jordan Pickford receive the red card he deserved.

We all remember the moment well, maybe too well as it sent the season into an entirely new trajectory.

Van Dijk is looking to keep the ball alive with just seven minutes on the clock at Goodison Park back in October but is then recklessly, at best, taken out by Pickford.

The challenge went unpunished as VAR sought only to identify if the Dutchman was offside in the preceding move and failed to take a closer look at what came next.

Michael Oliver, who was in command of the game that day, conceded a mistake was made as “we could still have given offside and sent Pickford off.”

But had the very same incident occurred in the upcoming season, an entirely different set of events would have unfolded due to the changes to VAR’s ruling of offside.

The upcoming season is to see marginal offside rulings move back to handing “the benefit of the doubt to the attacking player” as the Premier League adjusts to technology that cannot make an accurate call on the previous one-millimetre line.

ESPN‘s Dale Johnson expertly explained that “no player will be offside unless there’s a clear result” and so if the two ‘thicker’ lines touch, it will be considered onside with the attacker to be handed an approximate five-centimetre reprieve.

So how would that have altered the Van Dijk incident?

Well, the marginal call that tied Van Dijk’s arm with Dominic Calvert-Lewin’s foot would now see the No. 4 considered to be onside and as such would make what came next ‘live’ play.

Worth noting that Virgil van Dijk would have been onside against Everton.

That would have definitely resulted in a penalty for Liverpool, and as such the red card for Jordan Pickford would not have been missed as a full pitchside review would have been required. pic.twitter.com/4iqHqz50Em

Meaning, a penalty would have been awarded to Liverpool, which Oliver explained would have been the case had the initial ruling been onside, and a red card most definitely handed to Pickford as a review of the entire passage of play would have taken place.

It means little to Liverpool now, but it’s a clear illustration of the changes to come, ones that had they been in place earlier would have tempered the obvious frustration and anger from the Reds camp with the appropriate punishment duly dished out.

There will be no escaping marginal calls as only a new offside point has been created, but that the benefit will now be with the attacker is a welcome change.