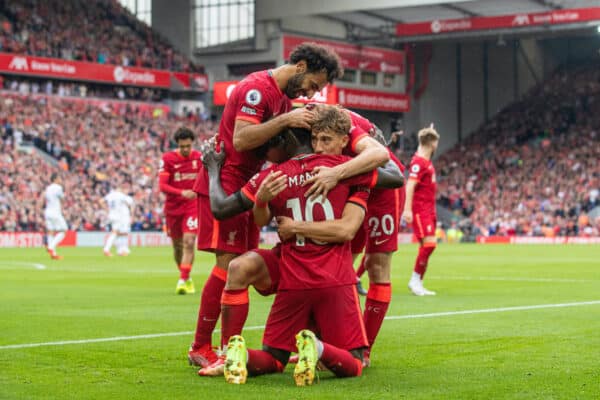 Liverpool kept up their perfect start to the season in front of a packed Anfield crowd on Saturday, with the return of fans bringing a 2-0 victory over Burnley.

After almost 18 months without a full home crowd, the anticipation in Anfield was palpable; the roar of the Kop drowning out the deafening PA system as the Reds emerged from the tunnel.

A high-tempo start followed a touching tribute to those lost throughout the COVID-19 pandemic and Hillsborough’s 97th victim, Andrew Devine, with Trent Alexander-Arnold required to clear off the line from Dwight McNeil’s early effort.

Liverpool controlled the half despite Burnley‘s usual underhand tactics, with full Premier League debutant Harvey Elliott seeing lots of the ball in his midfield role.

It took less than 20 minutes for Diogo Jota to reward the fans, his glancing header from Kostas Tsimikas‘ cross coming after a barrage of Burnley attacks that kept Alisson busy between the sticks.

There were more big chances to come, with Mohamed Salah‘s strike ruled out for offside after a wonderful pass from Elliott, while Sadio Mane blazed just over from close range, but the half ended with a 1-0 lead.

Within seconds of the restart Burnley had the ball in the back of the net, but the Kop was left jeering the hapless Ashley Barnes after his close-range finish was rightly flagged for offside.

There were times when the Reds looked too reluctant to play the killer pass or take a shot on, though, and it is in these moments they will be thankful for the return of the Kop to provide that added impetus.

Liverpool got their second goal in the 69th minute, with an excellent piece of play seeing Elliott find Alexander-Arnold who threaded it through to Mane who, completely free in the box, hammered home to double the lead.

The comfort of their advantage allowed Jurgen Klopp to send on Roberto Firmino and Thiago late on, the latter playing his first game in front of a full Anfield, with Liverpool cruising to a second straight win.