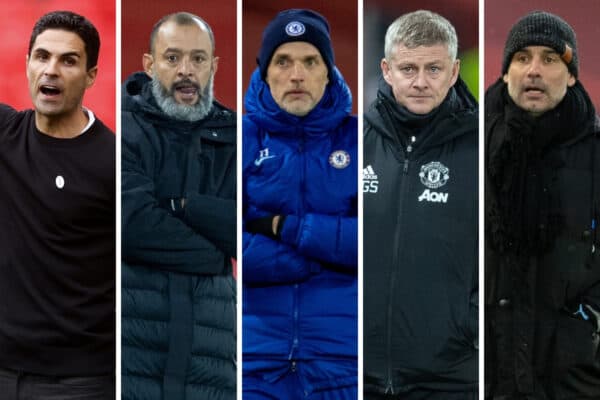 The 2021/22 Premier League title race could be the fiercest yet, but how many of Liverpool’s ‘big six’ rivals believe they have a chance of going all the way?

Liverpool get their Premier League season underway on Saturday, with Jurgen Klopp‘s title hopefuls heading to Norwich for an exciting clash.

Away from the Reds, their five biggest adversaries at the top will all be looking to have hugely successful campaigns of their own.

Man City and Man United have predictably spent big again, Chelsea are the newly crowned European champions and both Arsenal and Tottenham may be optimistic of having improved seasons.

I think we can expect a full-scale assault on everything the domestic game has to offer plus a renewed focus on the continuing drama of pulling in our first-ever Champions League.

The squad is plenty big enough, strong enough and talented enough to maintain a fight on four fronts.

If anything gives, it is normally the FA Cup, due to the timing of it all.

Jack Grealish, did you hear about him?

This will be a fascinating sub-plot. How does Pep fit a true maverick into a playing setup that has been running on rails?

It will, as ever, be interesting to see how it all comes together.

Despite all of this and the continuing rumblings about Harry Kane joining, as reigning champions City remain everyone’s target and how they cope with this will be key.

They can expect a bigger challenge from Chelsea, United and, perhaps, Liverpool, despite the widening gulf between the haves and the have-nots thanks to the after-effects of Covid.

Enjoy the facilities, the view and the chance to stretch your legs across the empty seats because there’s a good chance you won’t be over-chuffed with how the actual game rolls out.

One thing you’d change at your club if you could

If I had one wish it would be for City to cease to be the target of the know-nothing social media brigade that pander to all those who think the club only existed as a viable entity post-2008 and have only gained supporters in the last decade, too.

It’s a bit of an insult to all the middle-aged beer bellies who drag themselves into town every other week to support the club that has made them grow old prematurely in the first place.

If this is an impossible wish, I’d hope the newly installed South Stand rail seating can be used to good effect in boosting matchday atmosphere.

Liverpool dived badly last season, thanks without a doubt to an unhelpfully heavy injury list.

Nevertheless, only a bold finish saved a poor season for Herr Klopp and there will be pressure from the off to put that right.

I am expecting something closer to the title-winning campaign this time around, although I doubt the overall sheen of that unique season can be reached again.

I expect a genuine title challenge, not finishing second and 20 points behind the winners.

It isn’t the change that fans want – that is new owners – but the Glazers have no intention of selling and by bringing Jadon Sancho and Raphael Varane to the club protests have died down, for now.

Should it be a bad start to the season, expect more chants from returning fans voicing their displeasure at the US owners.

Enjoy Manchester but bring an umbrella, chances are it will be raining!

Sorry to cheat but new owners who care about the club and place proper investment not just on the pitch but off it, for both the men’s and women’s sides.

On top of that, owners that redevelop Old Trafford as it needs a lot of work, but also build the women’s side their own stadium and make their needs a priority as well.

As long as Klopp is in charge and the team stays fit for the season, a top-four finish will be easy. Whether you can maintain a title challenge and reach the latter stages of the cups will be interesting.

Mane and Salah having a full pre-season is much-needed, as is Van Dijk and Gomez.

This is certainly a squad capable of winning the league, it’s whether there is the quality in depth to hang with Man City and Chelsea that remains in doubt.

I expect to see our league improve and have a lot more consistency this year.

The rumours at the moment are that Romelu Lukaku is on his way and someone who can finish like him is exactly what we need. He’s got unfinished business with the club and should improve us massively.

I think we will finish second.

Apart from another Champions League trophy to see in our cabinet as part of the stadium tour, Nike seem to have outdone themselves this year with our new home kit.

I think it’s the worst we’ve ever had.

Enjoy it – it may not be modern, have a huge capacity or please you aesthetically, but it’s a classic old-style football ground where fans in the front rows are close enough to the pitch to tell an opposition player in their ear that they are fucking shit.

And that, quite frankly, is something we’ve all missed hearing while fans have been absent from stadiums.

I expect it will be the same for a lot of clubs but the Chelsea fan community on Twitter seem to be particularly terrible and really let the match-going fans down.

Their views are so reactionary, often sensationalised and just don’t reflect what normal Chelsea fans think.

It will certainly be interesting to see where Liverpool end up this season.

Firmino disappointed last year and it doesn’t look like any new striker will be coming in – I do wonder if that front three of Salah, Mane and Firmino can reproduce their form of a couple of seasons ago.

Having Van Dijk back and other defenders fit again will undoubtedly improve the team.

I am just not convinced though that Liverpool will have the squad depth to mount a title challenge, especially when you consider City have signed Grealish and probably Kane, too.

If anyone is able to finish above City this season they will be champions – I’m predicting a one-horse race with Liverpool and Chelsea battling it out for second.

I think you have to put it down as a transition year.

Given we offered the manager’s job to pretty much anyone with a coaching badge and we were coming off the back of a heavy hit from Storm Mourinho, you can only look at it that way.

That being said, by no sort of design, we got a great manager – someone I think can get the best out of Dele Alli, Lucas Moura, Eric Dier, Moussa Sissoko and (hopefully) Harry Kane.

So top six, some standout performances and a solid foundation for kicking on in the 2022/23 season would be a successful season.

Maybe an FA Cup if I was being greedy.

I feel a little like we’ve been here before with ‘the next Messi’, also known as Erik Lamela, but he is a definite coup.

Buy a pint and refuse one of the pre-poured ones. Make them ‘pour it from the bottom’. It’s magic.

Daniel Levy. Simple as that.

It’s a big season for you. Let’s be honest, you spent most of last year making excuses. About everything. All the time.

But if I’m honest, most were valid and it was a tough combo of negatives.

Now key players are back from injuries, others are well-rested, some reinforcements could come in and crowds are back, so there are no more excuses.

They need to show up and show the form of seasons past, and in all honesty, I think they will. Losing your title will hurt and that can create the fire to go again.

What I want to see this year is Mo Salah in full flight. Liverpool fan or not, he is a joy to watch and if he stays the course at Anfield I genuinely think he could become a Premier League great.

Probably another season scrapping for a Europa League position. Plus, I reckon we might be good enough for sixth.

It’s hard to really get excited about that, though.

Compared to last summer it has been pretty low-key on and off the field.

In terms of incomings, Nuno Tavares will provide backup to Kieran Tierney and with Thomas Partey injured Albert Sambi Lokonga will likely be thrust into action sooner than expected in central midfield.

Ben White is our highest-profile signing so far and replaces the outgoing David Luiz in defence.

Arsenal fans should remember to stop off at The Tollington Arms before or after the game – they’ve had a wretched time of it lately.

I can’t just take the bait and say ‘the owner’ because how do I know if the next billionaire to come along would be any better?

But it would be nice if fans could still hold shares in the club regardless of who owned it.

It was incredibly sad when everyone who felt like they owned a part of the club – however small – had to sell up to Stan Kroenke.

I’m not sure what to expect. Was last season a bit of an anomaly or the start of a slide?

I think Liverpool are flying under the radar a bit as all the other clubs they will be challenging with have made huge marquee signings.

But you should be better rested for this season and have key players back fit.

You will finish somewhere from first to third and I’ll still be captaining Mo Salah in my fantasy team every week.