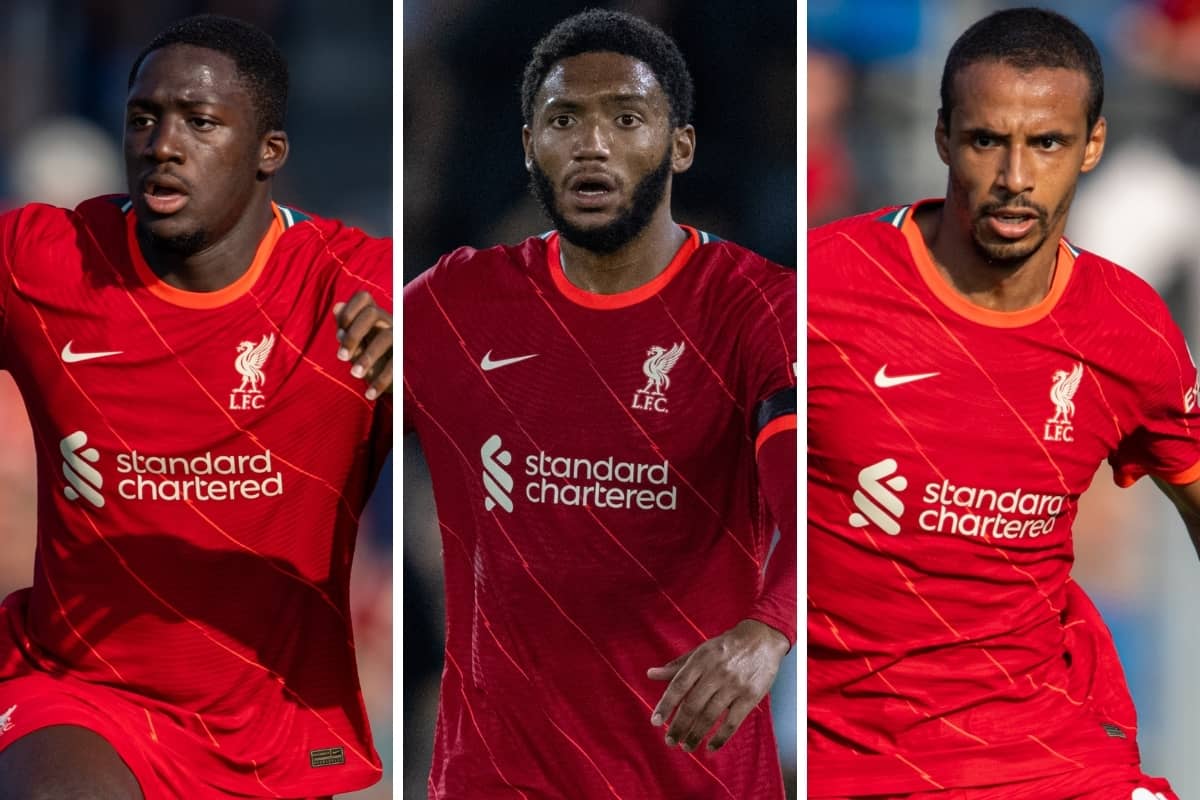 With Virgil van Dijk back in the fold for Liverpool, Jurgen Klopp faces a big decision over who should be the Dutchman’s first-choice partner at centre-back this season.

Van Dijk made his long-awaited return as a substitute in the Reds’ 4-3 friendly defeat to Hertha Berlin on Thursday night, after 285 on the sidelines.

He was joined in his comeback by Joe Gomez, who faced a similarly long spell out with a knee injury, to give a big boost to Klopp as he prepares for the 2021/22 campaign.

Injuries to all of his senior centre-backs saw Klopp quickly concede in the title race last term, and it was deemed a success that Liverpool were eventually able to finish third in the Premier League.

But with Ibrahima Konate joining the fold along with Van Dijk, Gomez and Joel Matip, the expectation is that another challenge is mounted this time around.

Van Dijk is the No. 1 choice at centre-back, and that is undisputed, but heading into the new season it remains to be seen who the manager will prefer as his regular partner.

There are other options beyond Konate, Gomez and Matip – namely Nat Phillips, Rhys Williams, Ben Davies and Billy Koumetio – but none of those will realistically be considered as first-choice starters for the season coming.

When it comes to Van Dijk’s companion, This Is Anfield put it to a vote among supporters both on the website and on social media, with a majority emerging: 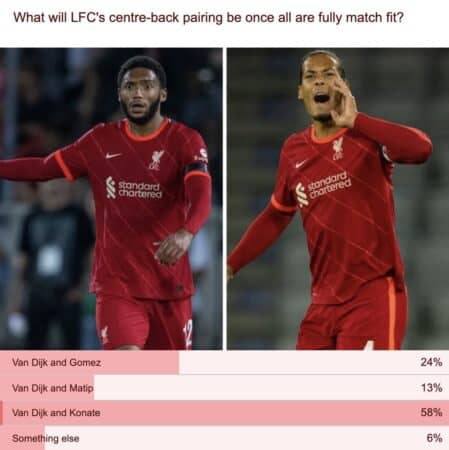 Konate, signed from RB Leipzig for £36 million, was the overwhelming favourite, with 58 percent of the vote from four options on This Is Anfield’s website poll.

Gomez (24%) was second while Matip (13%) came third, with the remaining six percent backing another option – the primary alternative being Phillips, who has earned cult status after his run of games in the second half of last season.

On Twitter, the poll drew similar results, though there was considerably less to split Konate and Gomez when it came to Van Dijk’s partner:

? What would your preferred centre-back pairing be if all options were fully fit and available?

It seems as though Matip, while a proven top-level defender, has lost an element of trust among supporters due to his persistent injury issues – which have kept him out of the first-choice bracket.

However, there were a range of responses from fans, with backers emerging for Konate, Gomez and Matip:

Yes Konate is a unit but I think the bond VVD & Gomez have worked on during their rehab will make them an unstoppable pairing. Think alike and both hungry for a smashing season

VVD + Konate. Konate has the size and strength over the other 2.

Interestingly, a number of supporters suggested a departure from Klopp’s current setup in favour of a back three, with an embarrassment of riches now available at centre-back:

Great options to play 3 at the back and let Trent & Robbo advance further with cover in defensive area if we’re ever playing against blanket sides like Newcastle, Burnley, Atletico etc etc who we’ve struggled against in recent times. Konate was great business!

Love to see how a 3-4-1-2 works. I know Jurgen doesn’t like 3 CBs but wow what an attacking team we could become. Wouldn’t play that format against a top team.

That is, of course, highly unlikely, with Liverpool instead acknowledging the need for four centre-backs capable of challenging for a starting spot rather than three.

Konate’s arrival certainly makes things more interesting, and after the initial weeks of the campaign – during which Van Dijk and Gomez are expected to continue building up their fitness – there could be more signs of Klopp’s long-term plan.