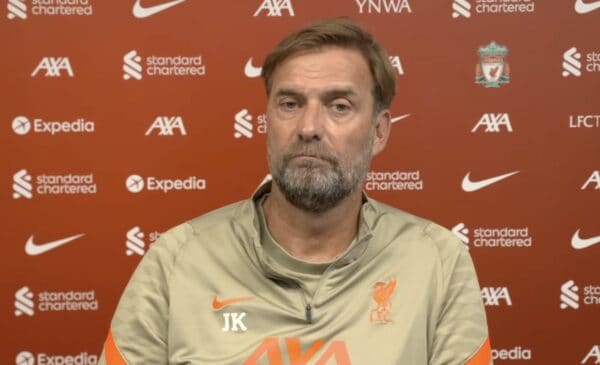 A blockbuster press conference from Jurgen Klopp on Friday ahead of Sunday’s trip to Leeds United focussed heavily on the farcical situation with Brazil’s FA.

Much of the press conference focussed on the situation regarding the Brazilian FA’s decision to impose a five-day ban on players who did not travel to take part in the internationals due to government quarantine rules.

Here are all the key points from the press conference…

Klopp’s opening response on the situation was almost five minutes long. The boss had a lot to get off his chest, rightly so.

Klopp tackled the whole situation, highlighting the ridiculous scheduling of internationals, why footballers should be exempt from the rest of society, and how he has no clue if they will eventually be allowed to play in Sunday’s game.

“We live in a bubble. We are not part of normal life,” he explained. “We go work, training, stadium.”

“The real punishment is the players, because that’s what they want to do (play).

“The world lives in a pandemic, still. Football players so far had exemptions and it didn’t lead to any spread (of the virus).

“All the things, we get tested three times per week, that’s different to normal society.”

Asked about when he may know if Alisson and Fabinho could play on Sunday, Klopp was in the dark like the rest of us: “I have no idea when I can expect a solution, we will see.

“It would be nice if we could train with the team I want to play on Sunday.”

2. FIFA and authorities do not care about footballers

Adding on that theme, Klopp highlighted the ridiculous scheduling of three games now during these international breaks, with Brazil playing in the early hours of what was Friday in the UK.

“Nobody listens,” said Klopp. “Nobody thought about the players when they decided that the last (Brazil) game of the 3-game run (in this break) was Friday morning our time and the next game could have been Saturday. They just don’t care.”

Further highlighting the hypocrisy of the situation, Klopp explained how when he received news that the players would not have a travel exemption, he was with Arsene Wenger and another FIFA delegate and they all agreed then that simply the players could not travel!

“There must be a point when FIFA, UEFA and all the other confederations sit together and start thinking about the game, and not only about their benefit,” he said.

Asked about FIFA’s plans for a World Cup every two years, Klopp was utterly against the idea and accurately assessed: “It’s all about money.”

“There’s no other sport in the world, I’m pretty sure, with such a relentless calendar, year-round,” he said. “Not a physical sport.

“Other physical sports don’t have this calendar. We all know why this is. In the end, it’s all about money, that’s how it is.”

“Somebody has to understand, that without the players, we cannot play this game.

“Nobody is more important than the players. Imagine if we have a World Cup every two years, we can be sure then it will then be a European Championships every two years too, so then they play every year.

“So they would get, at the most, three weeks off each summer, every year. It’s just not possible.

“Every reform that gets suggested, it’s always about more games.”

4. “Why would you play the best right-back in the world in midfield?”

The international break saw Trent Alexander-Arnold played in midfield by England boss Gareth Southgate, something Klopp was asked about but returned a very strong answer on.

Klopp was not only bemused by the suggestion that Trent should play in midfield, but doubled down by saying he cannot understand why anybody would even think to do it.

“If you watched our games, you’d see Trent’s position has changed, not in all games but some of them,” he said.

“It’s a shame in 2021 we speak like this, footballer’s play everywhere. On the right wing he is everywhere.”

Klopp added that if he were to play Trent in midfield, it would be in the ‘6’ position (the role Trent played at youth level) and not the ‘8’ as Southgate did.

“Why would you make the best right-back in the world a midfielder?” he summed up.

5. Virgil’s fine and has trained

There was a minor scare when Virgil van Dijk went down seemingly injured for the Netherlands in the week, but the boss confirmed that Van Dijk trained on Thursday and is fine.

The rest of the players who were away on international duty have all returned fine also.

6. A muted response on the transfer window

This was the first press conference after the transfer window was closed, but Klopp’s response to a question on it was very short: