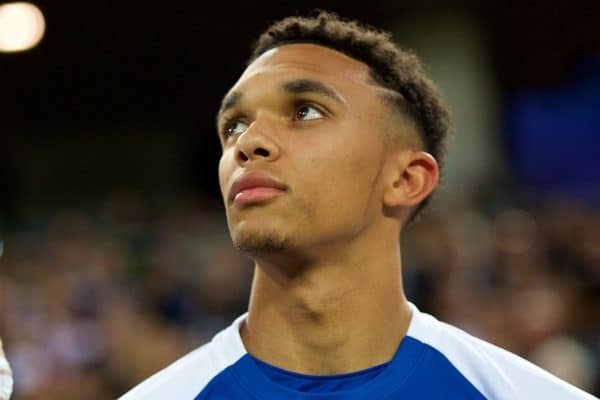 Gareth Southgate admits Trent Alexander-Arnold was “happier” at right-back as England thrashed Andorra 4-0, but insisted he hadn’t “lost anything” in midfield.

A brace from Jesse Lingard and goals from Harry Kane and Bukayo Saka sealed a convincing victory at Wembley, as both Alexander-Arnold and Jordan Henderson played the full 90 minutes.

When England released their teamsheet ahead of kickoff, it was confirmed that Alexander-Arnold would deviate from his natural right-back role as he joined Henderson and Jude Bellingham in a three-man midfield.

The 22-year-old only lasted 45 minutes in the role before Reece James swapped positions, and Liverpool’s No. 66 was much more effective after the break.

And speaking in his post-match press conference, Southgate explained the plan behind using Alexander-Arnold in midfield.

“We wanted to have a look at playing him in a slightly more advanced role,” the England manager told reporters.

“We know he’s just got outstanding quality with the ball, and of course, he finds himself in those positions with Liverpool.

“I don’t think we lost anything by having a look at it.

“We felt that at half-time we could actually get more from Trent, more from Reece and more from Hendo by rotating those three, and actually they started the second half well.”

After a journalist pointed out Alexander-Arnold’s improvement after moving back to right-back, Southgate seemed to agree.

However, he stressed that “we wanted to see something,” with it clearly an experiment that failed to provide the conclusion he and his staff had hoped for.

“I just think we wanted to see something and we felt this was a good game to look at it.

“Clearly, in the second half he’s in more of those positions where he felt more comfortable – even though a lot of the times they were the same positions he was in in the first half, but just he’s coming onto things.

“He looked happier in that position, that was clear. His play with the ball exhibited that happiness, if you like.”