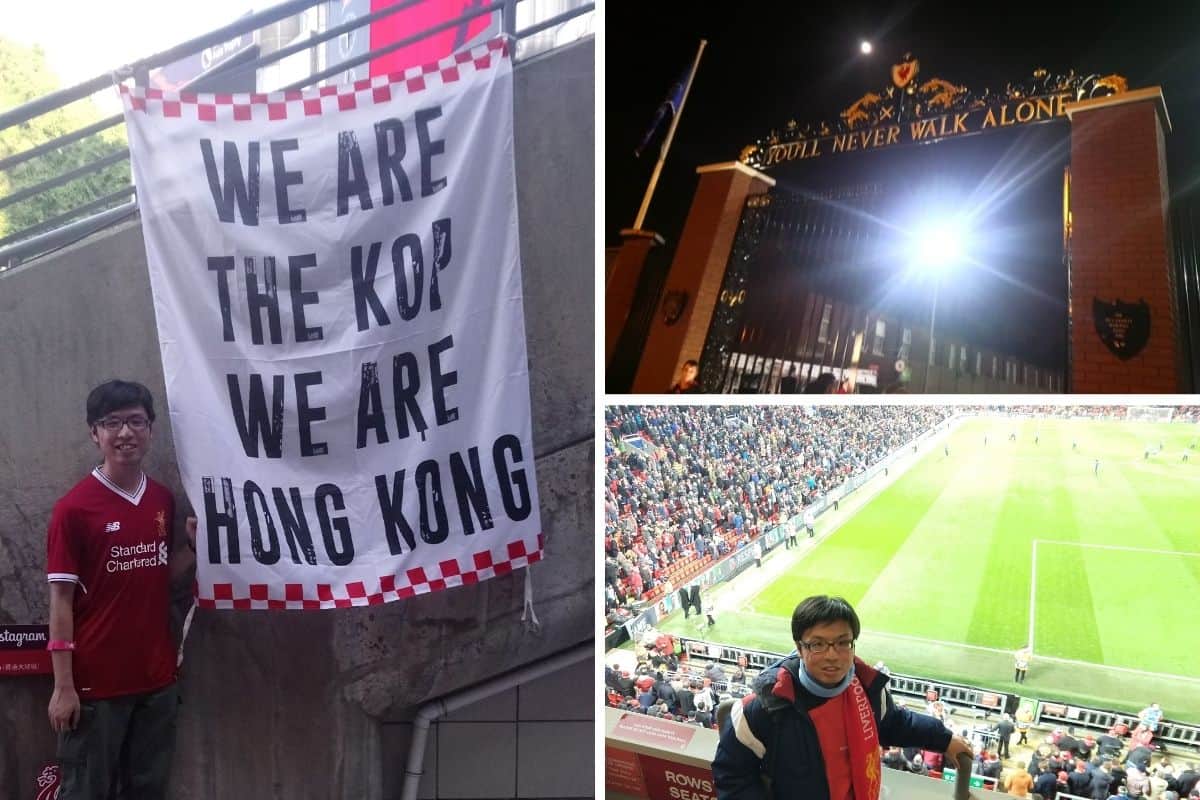 Our series Long Distance Liverpool Love shines a light on devoted fans who grew up as a Red away from Merseyside. Here, Kenneth Wong from Hong Kong shares his journey with Liverpool FC.

My first ever Liverpool kit was the 1996/97 season home polo kit, which I forget where my Dad got it for me. It was oversized so I could not put it on (but now it is obviously undersized!), and I had not even started watching football at that time!

Perhaps such a coincidence paved my fondness for Liverpool Football Club. I had started watching Liverpool play during the 1999/00 season, thanks to the rise of Premier League TV broadcasts in my city. At first, I was attracted by the star players like Michael Owen, Steven Gerrard, Robbie Fowler etc. 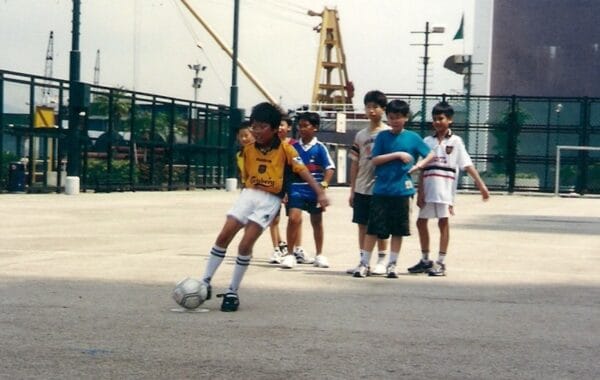 I would go to the football court and try to replicate Danny Murphy’s penalties and free kicks. But the moment that confirmed my passion for Liverpool was the 2001 FA cup final. When Owen scored that crucial winning goal, I could not hide my emotions and screamed in front of the TV.

Wow, what a moment, what a comeback. It is the time that I started to learn about never giving up.

As time went by, my passion for LFC grew beyond the pitch. I am touched by the anthem You’ll Never Walk Alone, I continue to learn more about the club’s history, the city, culture and appreciate the Scouse values. I started to realize that supporting Liverpool is not merely supporting a football team, it is also a way of life. LFC is in my blood.

Liverpool has a rich fanbase in my city. The team have come to Hong Kong several times before, with the recent one being in the summer of 2017, when they competed and won, the Premier League Asia Trophy. The whole Hong Kong Stadium was filled with Reds chanting like Anfield. To be able to watch my favourite team playing in our city, it was a once-in-a-lifetime experience! 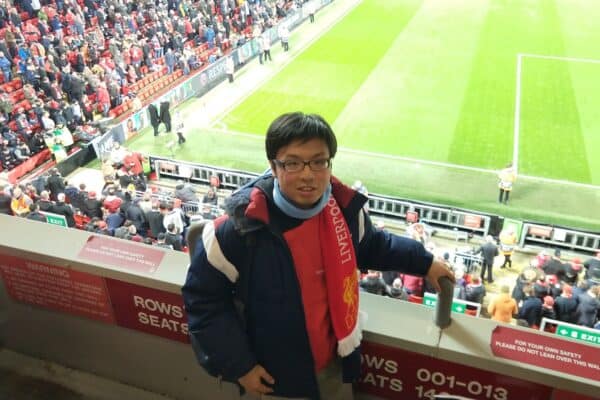 But I have been to Anfield several times and the last time that I watched a game live was the final Champions League group game vs Napoli in 2018. I have heard a lot about the great European nights, about the Anfield atmosphere, but that was my first time to really feel the power of the Anfield crowd.

The non-stop loud chanting gave a great boost to the team and to myself. I witnessed Salah score the only goal and the super save by Alisson just before the final whistle at the Anfield Road end. It was such a breathtaking moment, and the extraordinary atmosphere will stay in my memory always.

Due to the time difference, I have to get up at midnight to watch the European games. I would normally set my alarm clock to wake up just before kick-off. But sometimes I am so excited for the game that I cannot fall asleep, the matchday playlist album by George Sephton helps me a lot before the game as a warm-up. 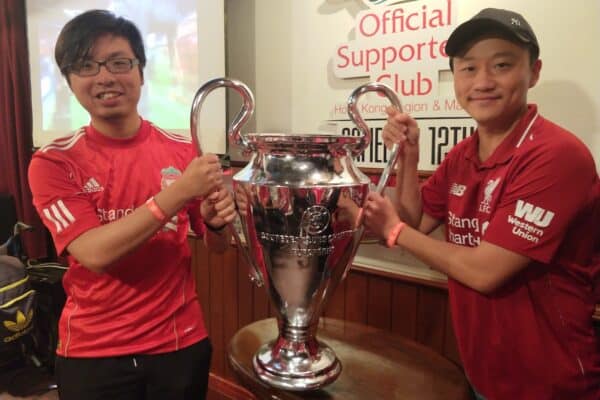 But before the pandemic, there was an LFC bar-restaurant called the Champs Bar where I often went to watch matches with other fans. I also have a chat group consisting of over 200 LFC buddies.

Whenever I miss a match at midnight, there could be over a thousand unread messages the next day! It just shows how passionate Liverpool fans are here, all of whom are willing to stay up at night to follow every game as much as possible.

Recently Jurgen mentioned that people support Liverpool because they are journey hunters, this is a sentiment that I like so much and cannot agree more.

It is the YNWA spirit and the collectiveness that makes LFC unique: If we go, we go together. Embrace and treasure every moment on and off the pitch along the football journey.

The boss also has readily said, “there are more important things in life than football, while football is the most important of the least important things.” In the past two years there have been many difficult times, the pandemic and so on. Life can be not so easy, following the club and football offers an anchor.

The club anthem You’ll Never Walk Alone always inspires me to persevere and walk on with hope despite being in darkness. It always reminds me of where we come from, how far we have come and the mates around you.

My Liverpool dream which came true…

As I mentioned before, I was fortunate enough to experience a European night at Anfield first-hand. Such a remarkable evening!

But going through all those great comebacks, watching my team playing in person, the moment when Liverpool clinched the first Premier League title after three decades was just incredible.

It is remarkably special that I have been part of the Liverpool community and that I could witness all these wonderful stories.

I would love to see us win the Premier League title again, not only to prove we are not a ‘one-season wonder,’ but also it is a great regret that the team could not celebrate the title with the fans last year.

Hopefully, this may give extra motivation to the team and we can all celebrate together when we are crowned champions the next time!

Kenny Dalglish – King Kenny is my most respected and admirable figure, for everything he has done for the club and for the city. I am not old enough to witness his golden days of playing and coaching, but fortunate enough to see him coming out of retirement to manage the club. It would be a dream come true to meet King Kenny in person!

Steven Gerrard – Undeniably Stevie G is my boyhood hero. How he carried the club for years, all the long-range goals and the ‘Gerrard finals’, he represents and defines Liverpool in the Premier League era. It would be lovely to show him how much we support him from afar!

Jurgen Klopp – Jurgen is not only a great coach, he is more importantly a great human and role model. I’ve really learned a lot from him in the past few years, from his inspirational words to his warm gestures. I hope I can give him a big hug one day, grab a beer for him and have a good chat about football and life!

* Thanks again to Kenneth for sharing his story, you can find him on Twitter @Kenneth_W89