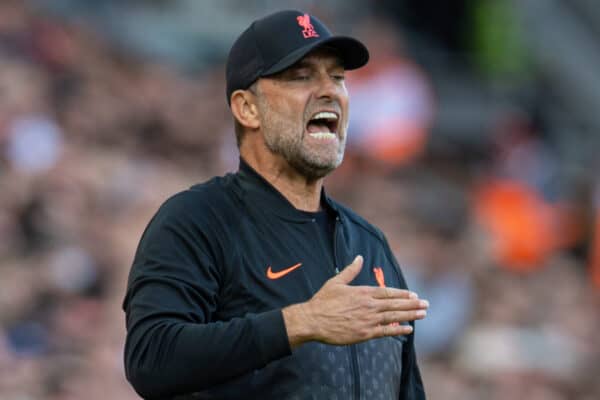 Jurgen Klopp has rightly voiced his strong opposition to the lack of player welfare from football’s governing bodies, saying they “just don’t care” as the priority lays elsewhere.

With the voices surrounding the World Cup moving to a two-year cycle instead of four growing louder each day, the welfare of players continues to take a backseat.

But Klopp is once again fighting in their corner, slamming the “relentless calendar” that sees international players fail to have any time away from the game when they only have one body to see out their career.

It’s left the Liverpool manager crying out for common ground between all confederations with players, who are the “most important ingredients of this wonderful game,” to be at the heart of reforms instead of money.

As always, the boss hits the nail on the head in his passionate response to a schedule that is increasingly getting out of hand in a discussion that is borne from the Brazil fiasco.

“There are more demanding sports in the world, like athletics and marathons but they don’t run 20, 30 or 40 a year and other physical sports don’t have this calendar.

“We all know why it’s happening, whatever people say that it is about giving different countries the opportunity, that’s why there are more teams in the World Cup, for example, but in the end it’s all about money, that’s how it is.

“That’s fine. We do it because not because of money but because we love it, but of course we get lots of money as well.

“But in the end at some point, somebody has to start understanding that without the players, the most important ingredients of this wonderful game, we cannot play it, that’s how it is.

“That means for top class plays they just play every year a big tournament. Every year.

“In a physical and very demanding sport an explanation from people out there, in forums, is ‘but they earn that much’. That has nothing to do with it because that’s one body they have.

“All things that came up in the last few years as the new ideas or a reform were always about more games. I read that today [Gianni] Infantino said there were too many meaningless football games, if so don’t play it.

“But if you only have competition, like Nations League, when all managers are under pressure that’s really, really difficult.

“With only competition, there is never time for a pre-season with the key players of the squad. They can never prepare for the season they have to play without a break.

“That’s not right, in the long-term for sure not.

“We spoke about it very often, I always say the same but it’s obviously not important what I say because nobody listens.

“For example, nobody thought about the players when they decided that [Brazil’s] last game of three was Friday morning UK time at 1.30am and the next game could have been Saturday.

“They don’t care, they just don’t care. It’s only one main interest and all the rest is not interesting.

“There must be a point when FIFA, UEFA and other confederations start thinking about the game and not only about their benefit. I’m already 54 and I’m not sure I’ll be alive when that happens.”