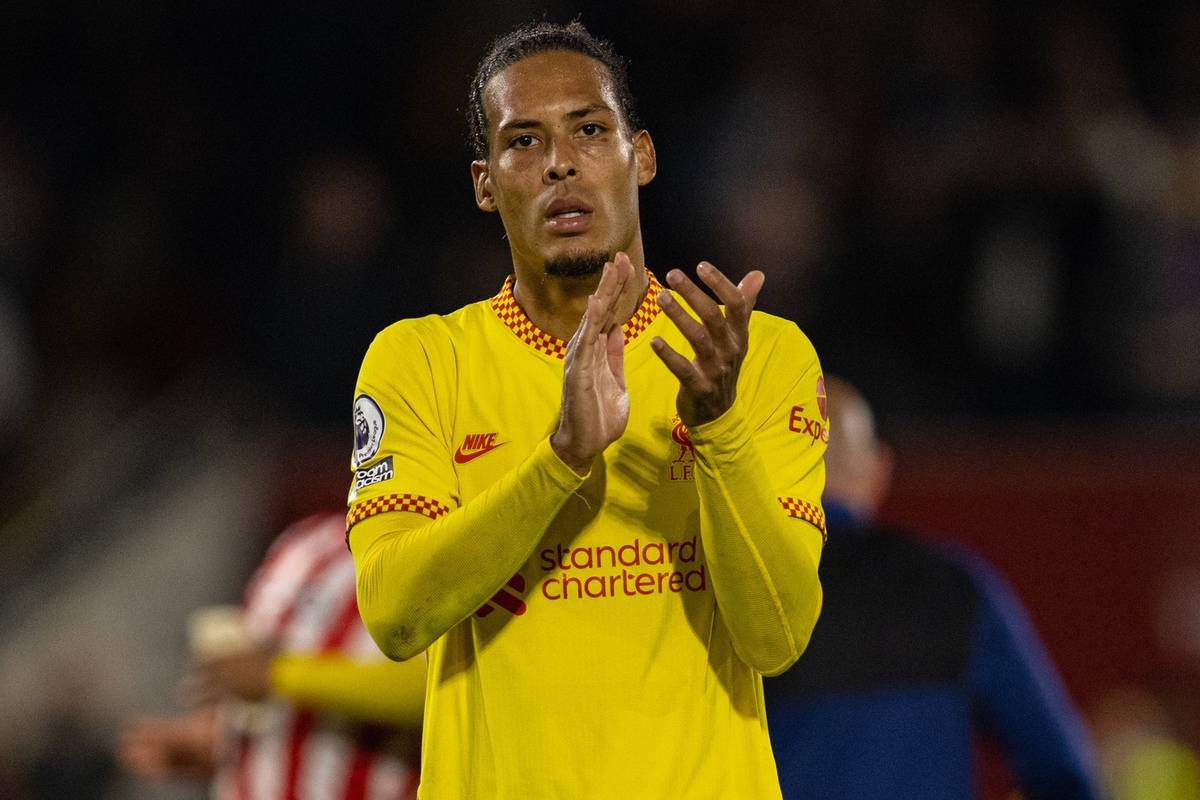 The watching media were left deeply unimpressed by Liverpool’s defending on a sloppy night for the Reds away to Brentford.

Jurgen Klopp‘s men knew a win would take them three points clear at the top of the Premier League, but they were disappointing against the Bees.

Diogo Jota, Mohamed Salah and Curtis Jones got the goals for Liverpool, but the Reds in yellow had gone behind initially and were pegged back twice.

The draw still took the Reds to the league’s summit by a point, but it was tough not to feel flat after dropped points against newly-promoted opposition, especially after twice being ahead and having had some superb chances to add further goals.

Here’s how the media reacted to the result.

Dropped points were rued by many, as Liverpool underperformed in west London… 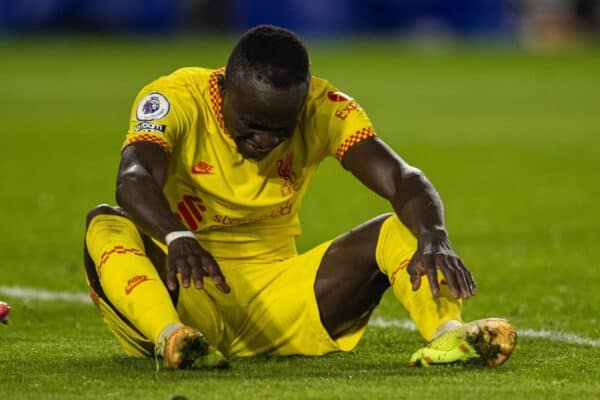 Ed Aarons of the Guardian believes the Reds need to go up a gear if they are to win the title:

“At the final whistle, Jürgen Klopp could not stop shaking his head in disbelief.

“Somehow his Liverpool side had contrived to throw away victory against a Brentford side that simply never stopped believing.

“While Klopp can console himself with the fact that his side are a point clear at the top after Mohamed Salah scored his 100th Premier League goal, he will know they must improve considerably if they are to go all the way again this season as their defensive weaknesses were exposed time and again.”

Karl Matchett of the Independent bemoaned the result, on a day when Chelsea and Man United both slipped up, too:

“Premier League, you’re having a laugh. Noise and nonsense was on offer at Brentford on Saturday evening, with no shortage of either in a breathless and relentlessly unpredictable 3-3 draw with Liverpool.

“An opportunity missed for Liverpool, though they remain the last undefeated side in the Premier League and top the early table.

“The game ended as it started, all square amid an incredibly noisy backdrop, but in between came a 90 minutes few will forget in a hurry.”

The Daily Mail‘s Dominic King tried to be more positive, but couldn’t deny that it was a chance blown:

“Here was an old-fashioned dust up: you attack, we’ll attack and let’s see what happens at the end. It’s unlikely Klopp will see positives at the moment, particularly after Liverpool allowed two points to slither away, but he absolutely recognised the limits to which his team had been pushed.

“It was bedlam but it was beautiful. The embrace Frank and Klopp shared suggested they knew it too.”

Paul Gorst of the Liverpool Echo was of the same opinion as much of the above:

“Before they had even kicked a ball at the Brentford Community Stadium on Saturday evening, Klopp’s Liverpool had already gone top of the table by virtue of Chelsea‘s defeat to Manchester City and their otherwise identical records.

“And while the Reds technically extended that advantage in West London on Saturday night, the point that achieved it will feel like scant consolation for Klopp on his return to Merseyside.

“Liverpool, though, only have themselves to blame as they turned in an uncharacteristically poor defensive showing to double the tally in their Goals Against column in all competitions across an unhinged 90 minutes of football here in the capital.

“Not once, but twice were the home side allowed back into the game to claim a share of the spoils that, in fairness, their efforts deserved.

“On a day when Man United and Chelsea both suffered defeats, the fact that Liverpool weren’t able to take full advantage will rankle with Klopp for some time yet.”

Some awful defending had to be mentioned… 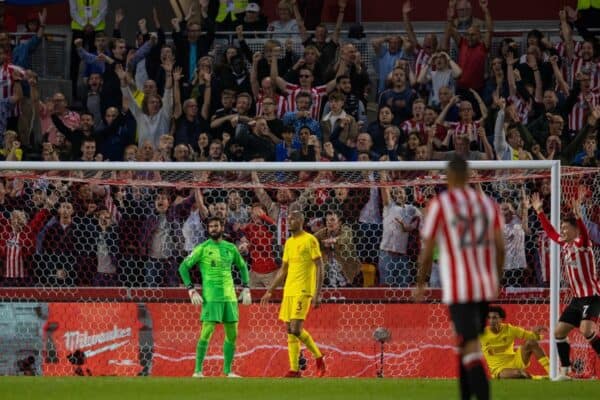 TIA were hugely critical, claiming Brentford showed how to rattle Liverpool at the back:

“Not for the first time, Liverpool went into their game after being handed an opportunity of sorts, with two rivals failing to take points with their earlier fixtures. We took one and stayed unbeaten, which leaves us clear at the top, but it should have been all three of course.

“Sadly, the defensive work was not up to scratch: first half it was Trent’s side targeted repeatedly, second half Robertson could barely keep up with anyone.

“Virgil van Dijk was largely excellent – forgive any on-the-whistle lapses if there are any here, quite a lot happened – but Ivan Toney gave Joel Matip a battering at times.

“If not for Virg and Hendo’s brilliant covering runs, Matip’s off-the-line clearance, and some well-held lines by the entire defence, Brentford could have had even more.

“The fact all those last-ditch interventions were required is the concerning thing.

The Mirror‘s Mark Jones was similarly at a loss, singling out Andy Robertson for criticism:

“They may now have their defenders back from injury, but there were times when Liverpool’s back four looked as though they hadn’t played together.

“There have been issues with the Reds’ last line for a while now, but a sudden uncertainty in Andy Robertson‘s game – perhaps caused by his injury in pre-season and then a struggle to get back to full fitness – has made them hit home.

“The Scot went to sleep down his side for the move that led to Pinnock’s opener that sent the home fans wild, and the goal had been coming as uncertainty reigned at times.

“It is something Jurgen Klopp is sure to want to work on.” 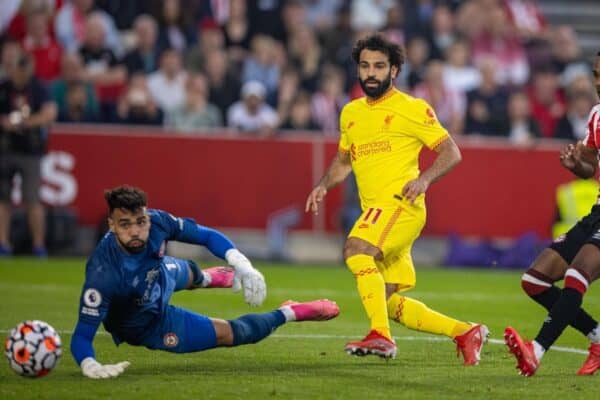 Jones lauded the Egyptian’s ruthlessness, as he found the net yet again:

“There’s still only one of Liverpool’s Premier League matches in which Salah hasn’t scored this season, as the Egyptian’s remarkable form in front of goal continues.

“His goal here to put Liverpool 2-1 up – eventually – was his 100th in the Premier League for the Reds (he also scored twice for Chelsea many moons ago) and it came at a time that his team really needed it.

“Fabinho‘s excellent ball over the top just – *just* – got Salah in, and we know by now what comes next.”

Matchett highlighted the illustrious company that Salah is in, outlining his status as a true modern great:

“Salah gave the ‘keeper no such opportunity soon after the restart.

“Fabinho’s inch-perfect ball was met by the Egyptian’s relentless left boot and, despite the misguided view of the assistant, VAR confirmed it was onside and Salah had his 100th Premier League goal for Liverpool.

“Only Sergio Aguero, Alan Shearer and Harry Kane have reached the milestone in fewer appearances for a club, while he’s also into the top 10 of the Reds’ all-time goalscorers list.

“With every week, with every strike, his hand grows stronger and Liverpool’s need more obvious to sort out his contract extension.”

Finally, Gorst suggested Liverpool’s No.11 could be as good as any attacker in Europe at the moment:

“Is there a more complete forward playing in Europe at this moment? Wherever you stand on that particular topic, it’s sure to be a lively discussion when it is had.

“Either way, there is no denying that Liverpool have one of the world’s elite attackers operating at the peak of his considerable powers right now.

“Salah will be the driving force behind any success that comes Liverpool’s way this season.”