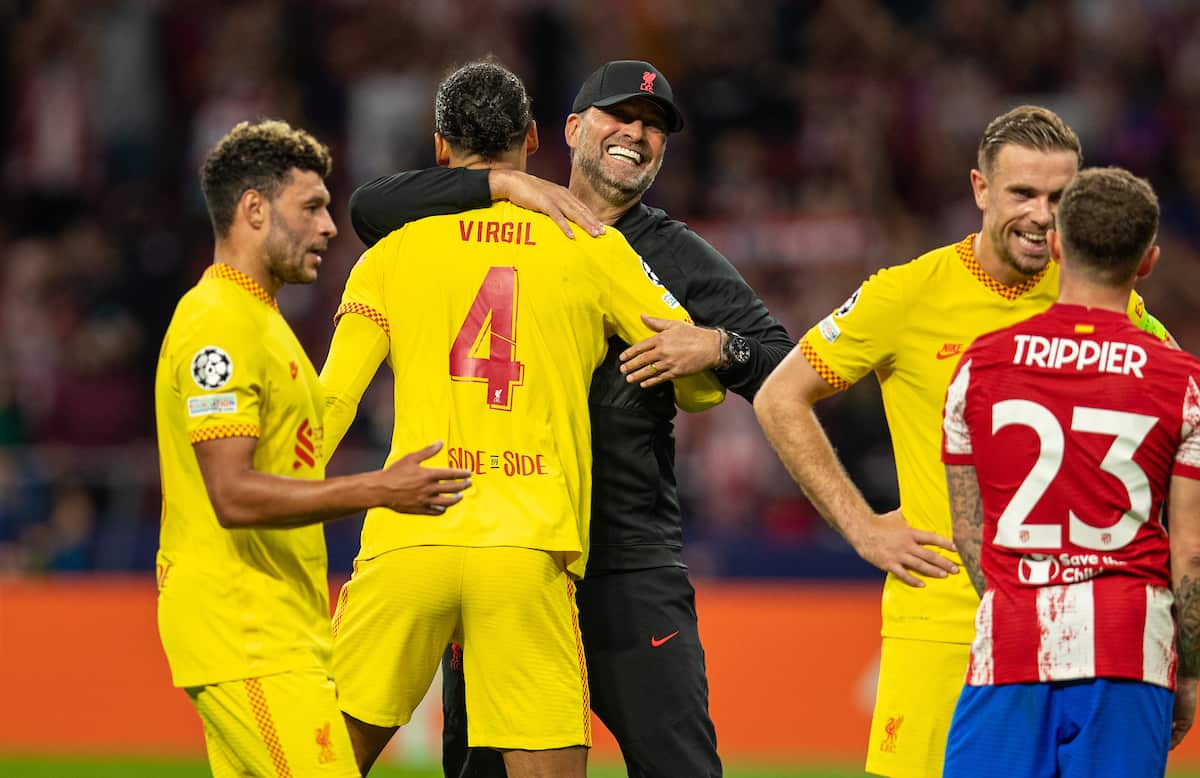 Liverpool won 3-2 away to Atletico Madrid on Tuesday night, but that was only half the story in a riveting encounter.

The Reds returned to the venue of their 2019 Champions League final success, taking on a famously resolute Atletico.

Jurgen Klopp‘s side made a dream start after Mohamed Salah and Naby Keita scored quickfire efforts, but Antoine Griezmann reduced the arrears before half-time.

The Frenchman then made it 2-2 in a breathless first half, with Liverpool’s defending leaving a lot to be desired.

Griezmann was sent off for a high foot on Roberto Firmino early in the second half, before Salah’s penalty earned the Reds a crucial win.

Some were delighted with the win, also trying to explain a crazy game…

First and foremost, immensely satisfying to win against Atletico. Maybe even more so to do in that manner. There were times there where I was thinking 'we just can't beat them'. But we did. And all those fans who jeered the knee are going home gutted.

Atleti in the Wanda Metropolitano is one of the hardest away games in world football. Unbeaten at home in Europe in 4 years, 1 home defeat in 40, a hostile crowd & ref-haranguing team led by a shithouse cheerleader in a suit. And Liverpool won. Sensational result #LFC #UCL

Never. In. Doubt. (Apart from all the times when it was in doubt.)

Reds win the battle. Horrible team to play against, credit them no rule to say they have to make it easy. But that's a massive win I'd have taken a draw at HT

One of the toughest away grounds in Europe and we've come away with 3 points, all that matters. Firmino MoTM for me, he was everywhere for 90 mins.

Atletico had the weekend off courtesy of La Liga. Their players were fresher. Some of our lads played all their nation's matches (some as much as 3) and were thrust straight into a lunch time kick off on Saturday followed by Tuesday. Perspective please on tonight's performance.

It was far from all positive, though…

Just an awful performance that. Three points though. Kryptonite Madrid they are. Don't know what it is about them. So horrible to play against. Even with ten men. Time for Henderson to be dropped. Two out of ten again.

We were so lucky, without the sending off we would't have won this game, from the 15th minute we were shit. That midfield should not start against the Mancs. Ox played well when he came on. #LFC

Keita had a bad night, despite his goal…

He’s now in his fourth season at #LFC so I don’t think it’s rushing to judgement to suggest Naby Keita lacks the defensive qualities needed to play in midfield for Jurgen Klopp. He offers more on the ball than Wijnaldum but can his manager trust him in the same way in big games?

If there was a half to sum up Naby Keita’s four years at #LFC, this would be it.

Keita won two of twelve duels in the first half

Naby is a mad footballer. Fourth season and I’m still none the wiser

Alisson was deemed Man of the Match…

Alisson MOTM by far. Bailed us out on multiple occasions. Shite performance by us though

Oh yeah Alisson MOTM. Best in the world. Kept us in it. pic.twitter.com/QO891qiu5c

Thank God for Alisson, he’s kept us in it since every outfield player randomly decided to down tools.

Alisson Becker – best in the world!

Alisson has arguably been our best player this match.