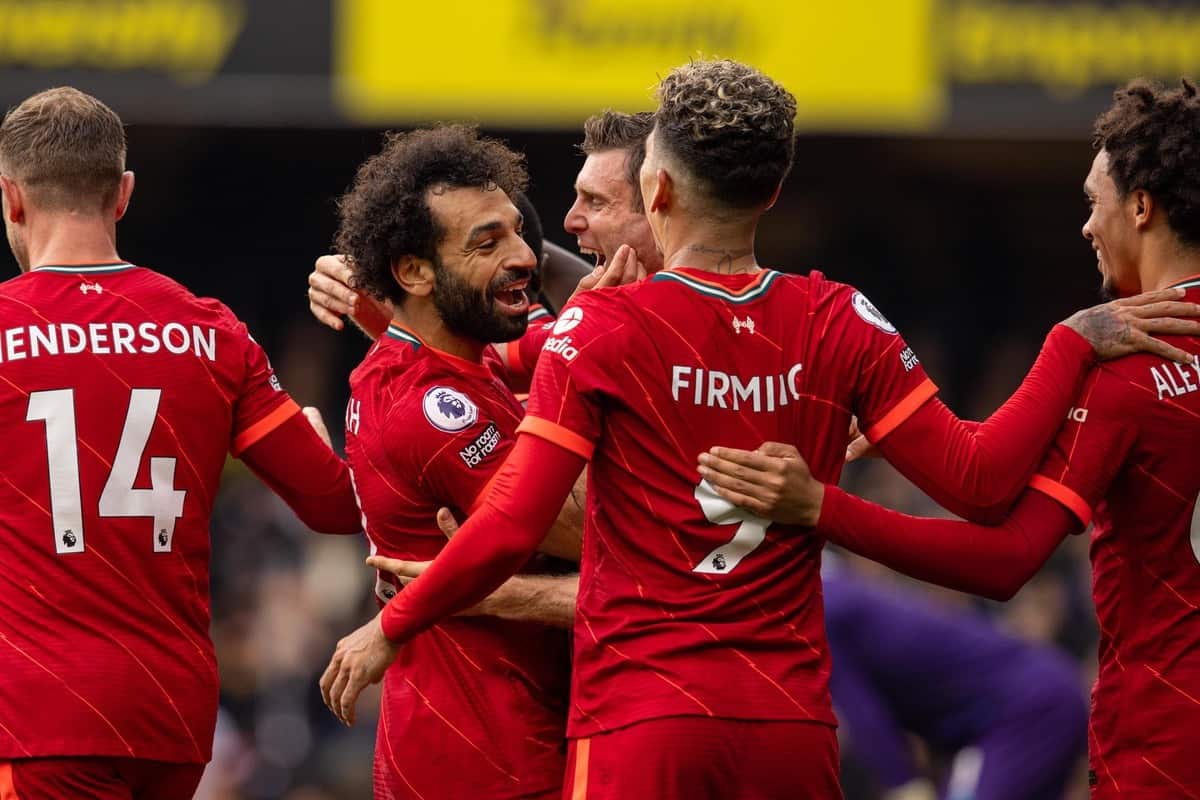 After 13 days without the Reds, Jurgen Klopp‘s men returned with a statement win thanks to five unanswered goals and a clean sheet at Watford on Saturday.

Liverpool had the far from ideal preparation following the conclusion of the international break with injuries and late returns all but seeing the XI pick itself.

But there would be no lingering effects of the break as the Reds turned on the style from the first minute to the last, with Watford simply left to watch on as Liverpool flexed their muscles.

Sadio Mane got the show on the road thanks to an inch-perfect assist from Mohamed Salah before the Egyptian himself added another spectacular solo effort to his highlight reel.

And a Roberto Firmino hat-trick would ensure all of the front three got on the scoresheet in what was another confidence-boosting display that maintains the unbeaten start.

Talking to to LFCTV post-match, Mane had nothing but praise for the team effort that was on show and the contribution of his fellow forwards:

“From the beginning we had a very, very fast start and created many chances. We scored five goals, five wonderful goals. I think we deserved to win today.

“I think [Salah’s was] a better goal than City! But it’s no surprise for us because we know his quality, one of the best players in the world. He showed it today.

“Bobby as well – he showed it – one of the best for sure in the world. I’m very happy for them.

“Especially Bobby’s hat-trick, it was not an easy time for him with injuries but he is back and I’m happy for him.”

It was a sentiment echoed by his teammates as the Reds hardly had to break a sweat at Vicarage Road with the team in perfect harmony.

After his 150th game captaining the club in the Premier League, Jordan Henderson commended a “top team performance” that did see certain individuals on fire in Andy Robertson‘s eye:

It was a view shared by Firmino, Caoimhin Kelleher and Neco Williams, who was handed his first minutes of the season from the bench and set up Bobby’s third goal:

Fellow substitute Alex Oxlade-Chamberlain shared in the joy of three more points added to the bank and it was “happy days” for Virgil van Dijk after a simple enough afternoon:

And it wouldn’t be a post-match celebration without James Milner and his hashtags, with Firmino and Salah getting the love this time around as they offered the “perfect start to the weekend”:

The victory was the perfect return to domestic action and it highlighted the dominance in attack once more with the match the eighth time this season that more than three goals have been scored.

It’s the ideal springboard for the trip to Atletico Madrid on Tuesday, another vital game that will see the return of Alisson and Fabinho after missing out on Saturday.