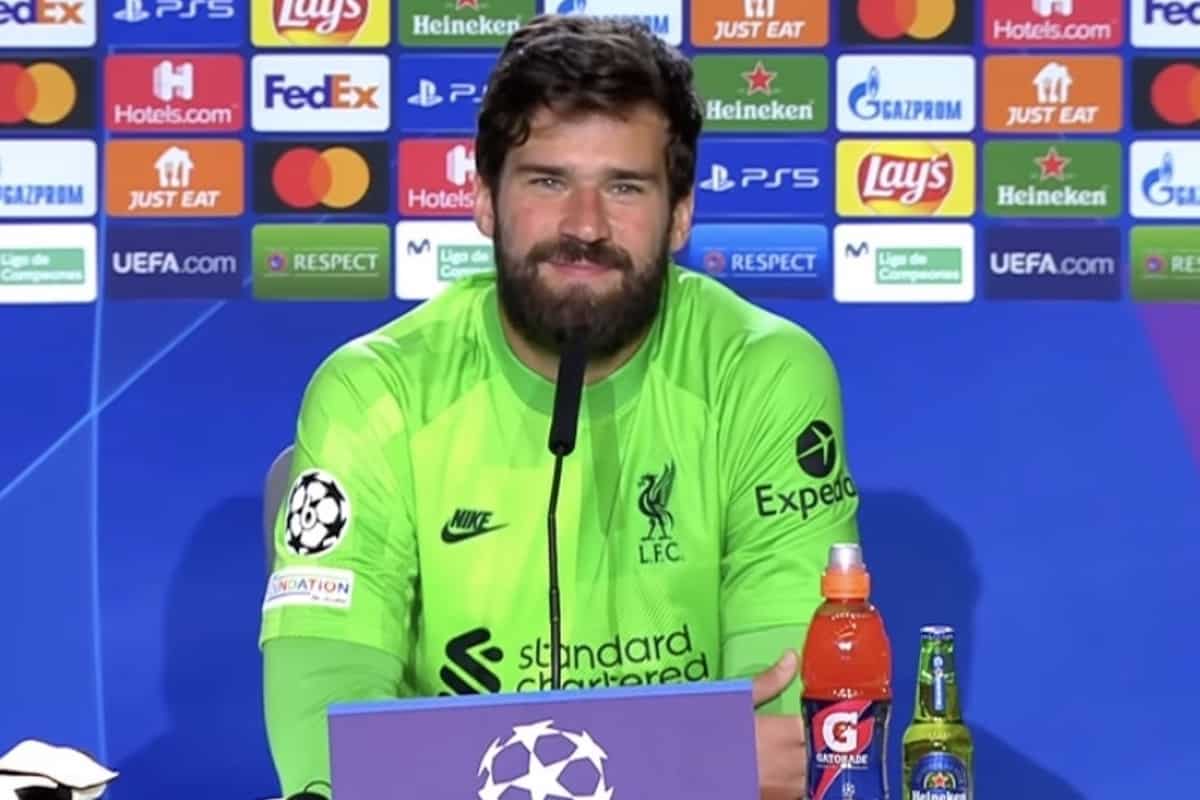 With Liverpool surrendering a 2-0 lead to go into half-time against Atletico Madrid at 2-2, Alisson has explained the importance of Jurgen Klopp‘s team talk.

It was set up as a tense battle with few goals expected, but early strikes from Mo Salah and Naby Keita put paid to that as Atletico’s game plan crumbled.

However, the Reds allowed their Champions League opponents back into the game, with the midfield brittle and gaps in defence vast as Antoine Griezmann twice struck to bring it level heading into the break.

Having been in a similar situation midway through the 3-2 win over AC Milan in September – going in 2-1 down at half-time having dominated throughout – it was vital Klopp got his words right in the dressing room.

There was a clear shift of emphasis as Fabinho replaced Keita for the second half, and speaking in his post-match press conference, Alisson hailed the manager’s influence.

“I believe the boss is a maestro in talking in the right moments, the right things,” he told reporters.

“He brought us into the game again in the changing room. Our attitude changed a little bit in the second half.

“It’s not easy when you are 2-0 up before 15 minutes and then straight away you concede a goal. You know that it will be hard.

“We came here, we know that wouldn’t be easy playing against Atletico, and the game shows it for everyone, for us and for everybody who watched the game.

“I’m happy that we could score the third goal, didn’t concede any more and controlled the situations more.

“There is a gap to improve as well, when we have one player more than them on the pitch you must create more chances.

“But, as I said, it’s not easy when they park the bus in front of the goal! We are happy for the three points.” 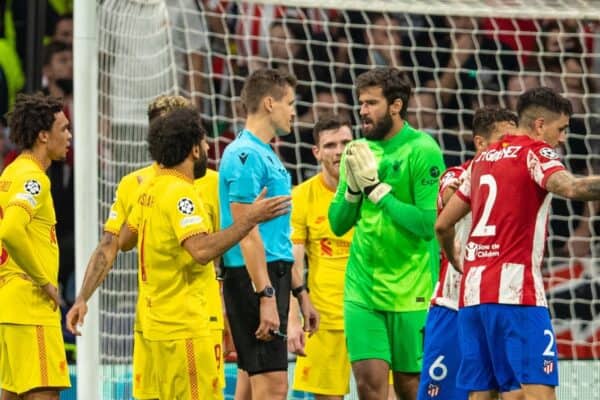 It was clear that Liverpool needed a shot in the arm after Griezmann’s brace, with the tide turning and the home crowd making for a difficult atmosphere to battle back in.

As Alisson attests, then, it was Klopp’s way with words that gave the Reds the impetus to come back for victory – helped, of course, by a moment of lunacy from Mario Hermoso.

Liverpool could be considered to have benefited from a measure of luck as Diogo Jota brought down Jose Gimenez in the penalty area soon after Salah’s spot-kick, but Alisson was adamant the referee made the right decision.

“I was quite sure it was not a penalty. I had a good view of the moment and went straight to the referee to tell him,” he said.

“The referee made a good decision. It was not easy, there was a lot of pressure from the supporters, from the opponents as well, but I think it was the right decision.”