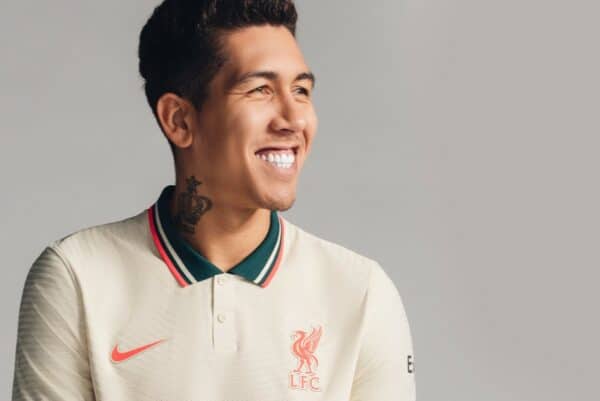 When Liverpool could finally debut their new ecru away kit

Liverpool’s first team are yet to wear their new away kit in full, in any game, so when will Jurgen Klopp‘s side finally debut the ecru throwback strip?

The Reds are 10 games into the new campaign and remain unbeaten, sitting second in the Premier League, top of their Champions League group and in the fourth round of the League Cup.

Half of those fixtures have been played at Anfield, with two trips to Norwich and a return to Porto included in the away games.

But despite finding themselves on the road 50 percent of the time so far, Liverpool have still not worn their new Nike away kit, with no debut for the ecru revival to date.

Liverpool attempted to wear the away kit for their pre-season friendly against Bologna, but they were forced to pair the shorts and socks with the red home shirt due to a clash with the Serie A side’s white strip.

It wasn’t until the eighth game of the season – the 3-3 draw at Brentford – that the Reds debuted their yellow third kit, with the home kit worn in every other fixture so far.

However, it may not be long until supporters can see Liverpool wearing the ecru away kit, with its debut coming as early as October 24.

The Reds are likely to wear red against Watford (October 16) and yellow against Atletico Madrid (October 19) due to clashes with the opposition’s home strips, but the trip to Man United presents an opportunity for a debut.

Liverpool typically wear their away kit at Old Trafford, rather than the third kit, including for both away games last season in the league and FA Cup.

If the club opts for the third kit, for whatever reason, the next opportunity to debut the away kit would be at West Ham on November 7.

While the first team are yet to wear the new away kit, however, it has already been seen in the under-23s’ 3-0 loss to United last time out and the LFC Women’s 2-0 victory over Coventry.