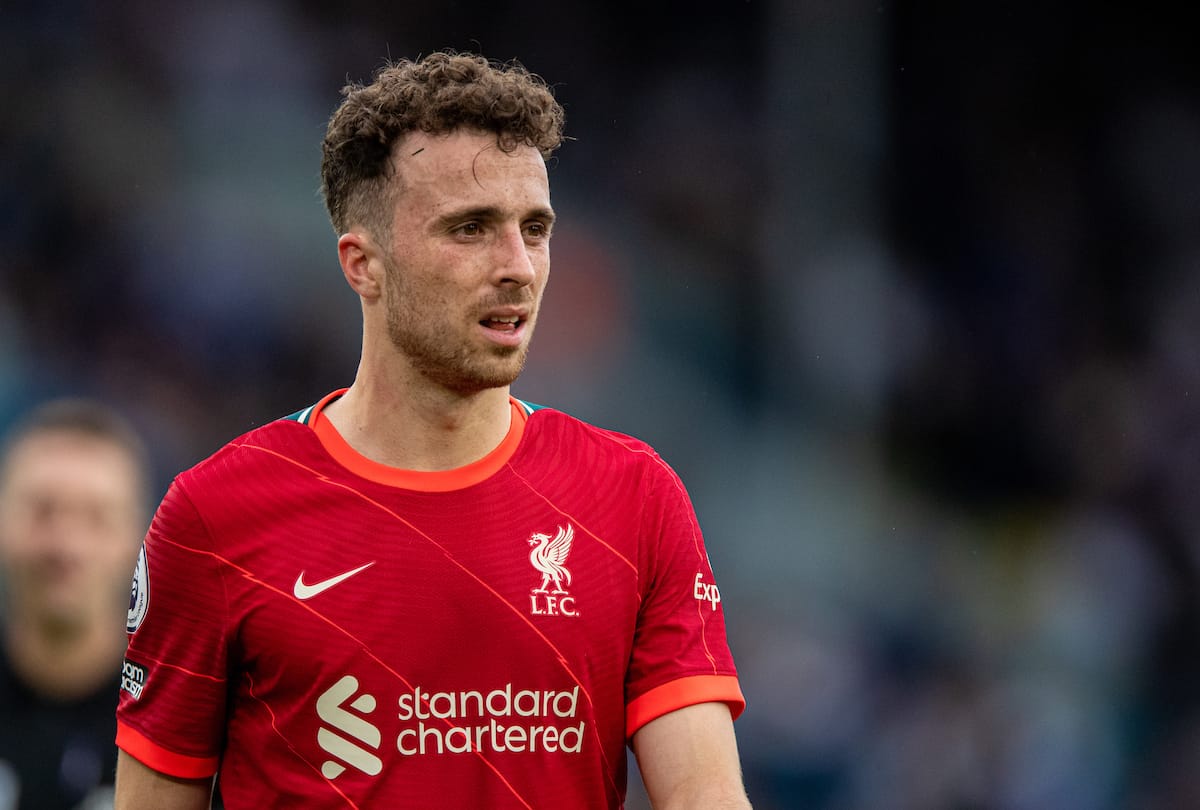 Diogo Jota has been a positive asset at Liverpool, but it can be argued more is required in his all-round game to become a true superstar at Anfield, writes Henry Jackson.

For too long, it felt like the answer to the equation was only Mohamed Salah, Sadio Mane and Roberto Firmino for Liverpool.

If any of them were out, the Reds were in real trouble.

Fortunately, Jota came in and negated that issue in the summer of 2020, hitting the ground running with nine goals in his first 14 appearances.

Everything he touched seemed to turn to gold and Liverpool suddenly had a fourth top-class attacking option – another Jurgen Klopp and Michael Edwards masterstroke.

Like so many last season, a long-term injury stunted Jota’s progress, but he still managed 13 strikes in total and has five already this term.

Despite the Portuguese’s undoubted quality, he is a curious footballer – one who isn’t easy to pin down but his game-defining moments can be just the start for Liverpool. 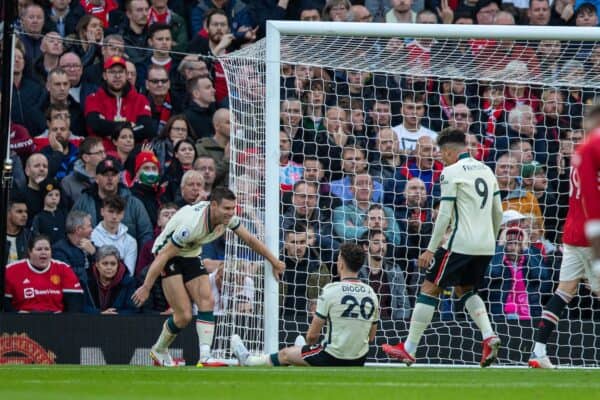 When you watch a Liverpool game, Jota can almost become the forgotten man on the pitch.

The minutes drift by, and all of a sudden, you could be forgiven for thinking he has been substituted.

But, like many more traditional centre-forwards, Jota’s greatest strength is his ability to deliver big moments in otherwise ineffective showings.

There is no fluke in that, with expert movement and composed finishing required to be such a ruthless predator.

Look at Jota’s five goals this season and they all highlight his penchant for getting in the right positions and finding the net.

At Norwich, he was on-hand to pounce on a fortunate Salah assist, also squeezing himself between two defenders against Burnley, heading home clinically. 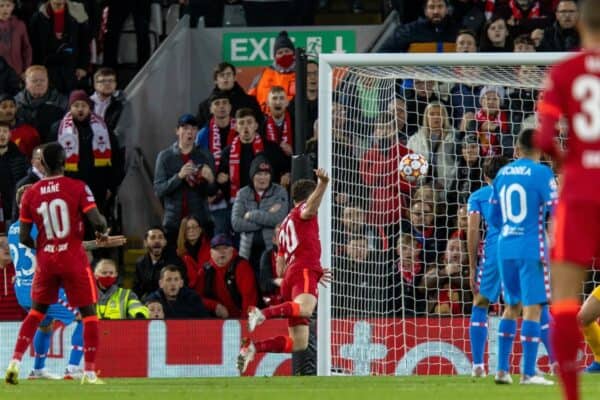 Another headed effort came Jota’s way at Brentford, while Man United and Atletico Madrid were victims of his poachers’ instinct inside the six-yard box, too.

Was the 24-year-old exceptional in any of those games in their entirety? No.

But he popped up when it mattered and buried good chances, which hasn’t always been the case with central strikers under Klopp.

While Jota’s influence has unquestionably been positive in the past 15 months, his individual style isn’t always in keeping with that of Klopp’s at Liverpool.

It would be hugely unfair to label him as anything close to lazy, but is he doing enough in a Reds attack renowned for being exceptional in all facets of its play?

Where do Liverpool need more? 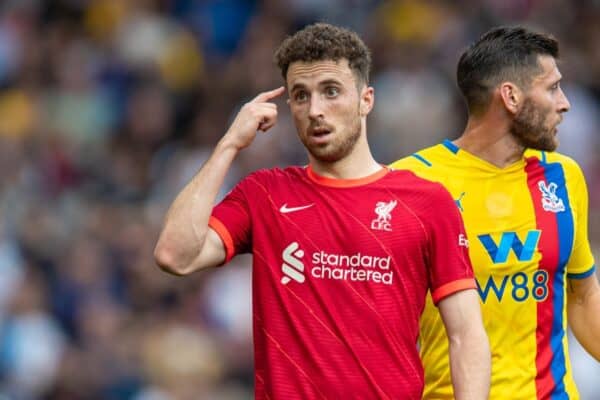 When it comes to finding footballers who are chalk and cheese, Jota and Roberto Firmino could spring to mind.

The latter has arguably been the poster boy of the Klopp era, in terms of his selflessness and creative spark, leading the line in an inimitable fashion.

Firmino isn’t perfect – his profligacy in front of goal has been well-documented down the years – but he is a dream to play alongside, as Mane recently highlighted:

“I have always said – and I will say it again – that without Firmino we wouldn’t be the same. In the five years I have been playing with him you can see how many passes and how many assists he has provided.”

Jota was brought in to offer something different to the Brazilian, and while that makes Liverpool’s attack even more potent as a collective, he is yet to enjoy his teammate’s influence.

This season, Firmino has averaged 57.1 touches per game compared to Jota’s 40.4, immediately suggesting a clear contrast in involvement.

Over half of the former’s touches (29.8) have come in the middle of the pitch, while the majority of the latter’s (21.5) have been in the attacking third. 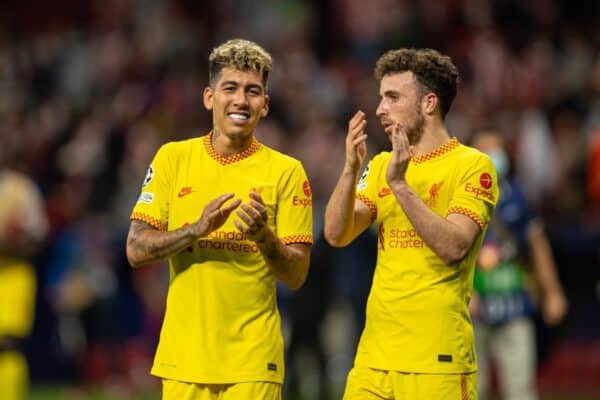 This again shows how adept Firmino is at being in the central hub of matches, dropping deep and allowing space in behind, while Jota is less astute in that area of his game.

He could simply be doing what Klopp asks of him, though, with his role also intertwined with covering Mane on the left-wing.

Liverpool’s No. 9 is also more effective in his off-the-ball work, winning 2.2 tackles and enjoying 7.8 successful pressures per game this season, eclipsing Jota’s respective tallies of 1.2 and 4.93.

While assists aren’t necessarily the most telling metric in football – you can’t do anything if your teammate misses! – the totals that the Liverpool duo have accumulated also tell a story.

In contrast, Jota only has two assists in his entire time at Anfield, chipping in with one every 22 appearances, also creating just six big chances in 29 league outings for the Reds (4.83).

The biggest criticism aimed at Firmino is that he isn’t prolific enough, but he has even been finding the net more regularly than Jota this season.

The Brazil international has six goals in 11 appearances, in just five starts, compared to Jota’s five in 14 matches (11 starts).

Jota has been a strong signing, but these figures suggest he needs to become a more effective footballer if he wants to be spoken about like Firmino one day.

As a new attacking era slowly dawns on Merseyside, he must ensure he is a vital part of it.

How good can Jota become?

At 24, Jota remains a young player still maturing, so it would be wrong to go too overboard about his shortcomings.

He is the same age Mane was when he joined from Southampton in 2016, while Salah had just turned 25 when he traded Roma for Liverpool the following year.

Both undoubtedly made good starts to life at Anfield, but they also weren’t the superstars they have since grown into.

With Liverpool’s iconic front-three now either 30 or close to reaching that milestone, it could be up to Jota to spearhead the attack over the next five or six years.

Granted, Salah has it in him to play well into his 30s, but there is no guarantee that he will remain the player he is currently and there is still a contract to sort.

With Firmino out injured well into December and possibly beyond, this is an ideal time for Jota to enjoy a prolonged run in the team, further showing Klopp why he should be first-choice.

Starting against Arsenal this weekend, it would a welcome sight to have Jota’s influence in various facets of the match taken up a notch, getting the best out of both him and his teammates.

If he can fine-tune his game and add even more attributes on top of the movement and the goals, Liverpool will have another world-class attacker to call upon for the present and future.