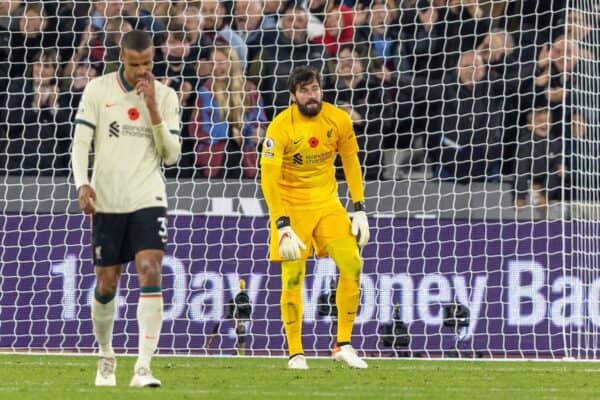 Liverpool deserved to lose in a breathless game in east London, as David Moyes’ well-drilled West Ham fought for a 3-2 victory to end a 25-game unbeaten run.

A pulsating start at the London Stadium caved with a moment of weakness from Alisson who, under pressure from Angelo Ogbonna at a corner, failed to get enough contact on the ball and conceded an own goal.

Stuart Attwell in the VAR booth was particularly busy early on, as after dismissing a foul on Alisson for the opener, he was then required to rule out a possible red card for Aaron Cresswell for a strong challenge on Jordan Henderson.

Problems for Ogbonna then forced a change for David Moyes’ side, with Craig Dawson slotting into a deep-sitting defence that limited opportunities for Liverpool.

The majority of the Reds’ chances came from out wide, with Andy Robertson lively on his return to the side but at times lacking in the quality of his end product.

A moment of incision from Alex Oxlade-Chamberlain bought an opening for the equaliser, though, as with Mohamed Salah brought down, Trent Alexander-Arnold stepped up to curl home a stunning free-kick.

The action continued after the break, and another Pablo Fornals corner almost handed West Ham another, only for Dawson’s header to bounce over off the bar.

Up the other end, Lukasz Fabianski was needed to deny Sadio Mane from point-blank range, with the physicality and precision of a West Ham defence led by Kurt Zouma routinely thwarting Liverpool attacks.

Then a brilliant run from Reds target Jarrod Bowen inspired another goal, with the Englishman surging forward and shrugging off the attentions of Robertson, Fabinho and Oxlade-Chamberlain before Fornals’ effort squeezed past a limp Alisson dive.

Oxlade-Chamberlain was the spark in midfield, but Klopp opted to replace him with Thiago with 20 minutes to play, with a glance at his substitutes showing a lack of impactful options at 2-1 down.

It got worse for Liverpool, though, and Alisson was again weak at a corner as he found himself distracted by Antonio and backwheeling towards a leaping Zouma who made it 3-1.

On came Divock Origi – the only real choice from the bench – and in typical fashion the Belgian reduced the deficit with goal from nowhere, firing on the turn into the bottom corner.

Mane had a brilliant chance to make it 3-3 as the game headed into stoppage time, but the No. 10 nodded it wide after another perfect free-kick from Alexander-Arnold and the clock ran down for a first defeat of the season for Liverpool.