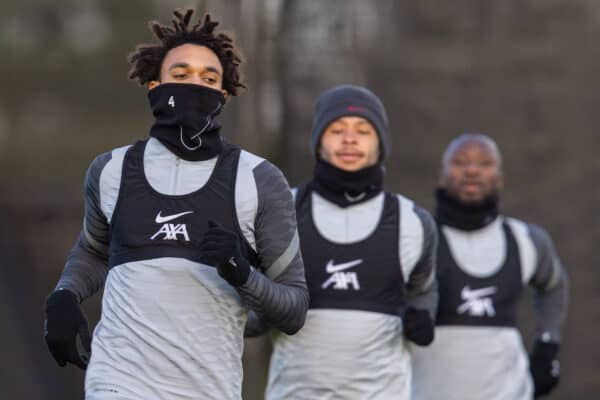 The Liverpool squad has arrived in Milan ahead of tonight’s Champions League clash, with four senior players not travelling, but four youngsters are among those involved.

Jurgen Klopp and his side will look to round off Group B with a perfect record, becoming the first-ever English side to win all six of their group games.

They come up against an AC Milan outfit still hoping to progress to the last 16, with Porto and Atletico Madrid also in with a chance of reaching the next stage.

In his pre-match press conference, Klopp admitted that he would “have to rotate” for a game that, beyond prize money, means little to the success of his side.

To that end, it was perhaps no surprise that Jordan Henderson, Thiago and Diogo Jota were all not involved in the Reds’ open training session on Monday, with it suspected the trio were in second-day recovery after the win at Wolves.

None of those three made the flight to Milan, while it appears as though Virgil van Dijk was also left out of the travelling squad as Liverpool continue to manage his fitness.

James Milner is not in Italy either, having picked up a one-match suspension with his third booking of the group stage against Porto.

Filling the void, Klopp told reporters on Monday that he would “have more young boys” in his squad, with Tyler Morton joined by Conor Bradley, Elijah Dixon-Bonner and Harvey Davies for the trip.

Morton is in line for his second start in the Champions League, while goalkeeper Davies, right-back Bradley and midfielder Dixon-Bonner are likely to make the bench.

Furthermore, both Naby Keita and Joe Gomez have travelled, with Klopp suggesting in his press conference that while neither would start, he would utilise his allotted five substitutions to allow them valuable game time on their return from injury.

A strong side is still expected to line up at the San Siro, with Mohamed Salah, Sadio Mane, Fabinho, Joel Matip, Trent Alexander-Arnold, Andy Robertson and Alisson all making the flight.

But there is no guarantee all of those key players will start, and in fact, it is likely that Robertson misses out with Kostas Tsimikas taking press conference duties alongside Klopp.

Meanwhile, it seems feasible that one of Salah or Mane will start on the bench, with Divock Origi and Takumi Minamino given another chance to impress.