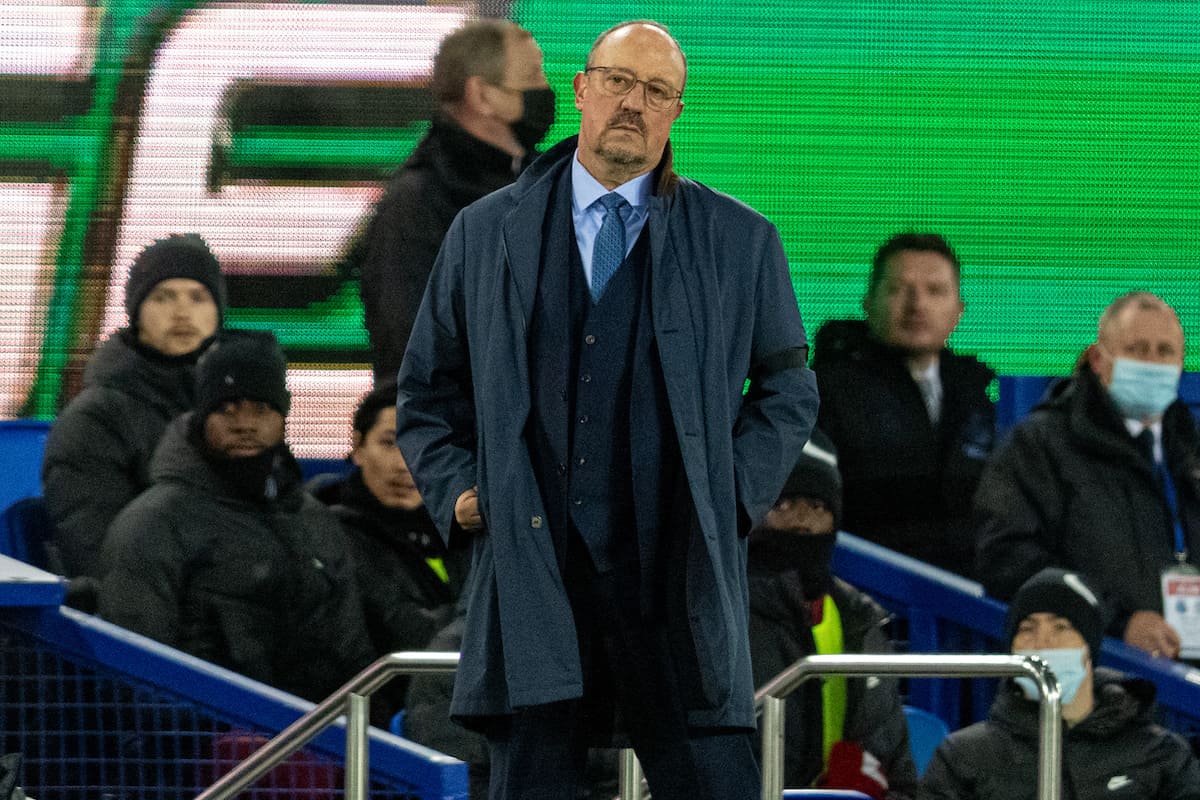 Defiant Everton manager Rafael Benitez insisted his side would improve despite a humbling 4-1 Merseyside derby defeat at home to Liverpool making it eight matches without victory.

Two goals from Mohamed Salah were sandwiched between Jordan Henderson’s opener and Diogo Jota’s 79th-minute strike as the hosts were completely outclassed.

Demarai Gray had briefly made it 2-1 just before half-time – their first goal in a month – but in reality the gulf in class and application was huge and when the fourth goal went in, home supporters streamed for the exits.

Of those that remained, one fan ran onto the pitch to confront players at the final whistle, while there were chants of “Sack the board” and abuse directed at chairman Bill Kenwright and director of football Marcel Brands.

There were few, if any, calls for the manager to go, however, perhaps indicating an understanding of what the Spaniard has inherited.

Everton have taken just two points from a possible 24 and failed to win a home derby in more than 11 years.

The problems are piling up for Benitez but he tried to remain positive and hopes when the likes of striker Dominic Calvert-Lewin and Yerry Mina eventually return from injury, things will improve.

“I think everyone has to be disappointed because we have lost and lost the derby,” he said.

“But we have lost because we made mistakes against a top side. You see how much money Liverpool have been spending and how successful they have been in the last few years.

“We didn’t do things right and made too many mistakes. Against any other team it maybe wouldn’t have been so bad.

“I have to take the positives and the positive of this team is at the beginning of the season everyone was so happy, with the commitment and the way we were playing and winning.

“We have to go back to this first phase.

“We were losing players for injuries and now we have to get these players back and we will have more competition in the team and we can play at the level before.”

Asked whether he thought Everton’s heaviest home derby defeat in 39 years would affect his position Benitez added: “I am a professional and have enough experience.

“I can see when a team is giving everything. The commitment of the players is here.

“We have to analyse and see the commitment, desire and intensity. Today we made mistakes.

“As a manager you’re expecting your players to give everything on the pitch.”

By contrast, Liverpool manager Jurgen Klopp saw his side set a new record by becoming the first top-flight English team to score at least twice in 18 successive fixtures in all competitions.

He was impressed by the way they handled the occasion on the return to the ground where 14 months ago they lost Virgil van Dijk to a season-ending ACL injury and midfielder Thiago for almost three months with a knee problem after some reckless tackling from Everton’s Jordan Pickford and Richarlison.

“For sure the best performance we have showed at Goodison since I’ve been at Liverpool,” he said.

“We were never as calm or convinced as we were tonight and that’s why we won the game.

“Since I’ve been at Liverpool we had to learn how to play these games, how to play at Old Trafford and Goodison, and tonight it was a big step in our development.”