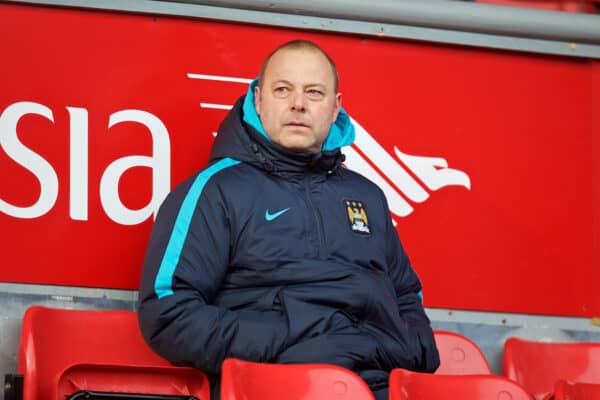 Pep Guardiola is one of 21 first-team players and staff to test positive for COVID-19 at Man City this week, with an ex-Liverpool coach set to manage their next game.

City are due to visit Swindon in the third round of the FA Cup on Friday night, but like Liverpool, their squad and coaching staff could be severely depleted.

The Premier League leaders confirmed on Thursday that Guardiola, along with assistant Juanma Lillo, had tested positive for Covid two days previous.

They now have 14 first-team staff and seven players currently isolating, while Riyad Mahrez is on duty with Algeria at the Africa Cup of Nations.

But while an outbreak led to Liverpool postponing their League Cup semi-final clash this week, City are pushing on with their fixture list and have drafted in a replacement for Guardiola.

Rodolfo Borrell, assistant coach for the Manchester club, will fill in for the trip to the County Ground.

The Spaniard, who has been with City since 2014 and in his current role for the past five-and-a-half years, joined their staff after half a decade working in the Liverpool academy.

It was under Rafa Benitez that he was appointed under-18s manager in 2009, before stepping up to the under-21s two years later and then, in 2012, taking up the position of academy technical director.

Borrell is widely credited with helping transform Liverpool’s youth ranks, with Raheem Sterling the headline name to step up to the first team during his tenure.

Now, though, he is part of the opposition, and on Friday night will manage his first senior game since a brief spell in charge of Greek side Iraklis in 2008.

City’s Covid outbreak is unlikely to have a major impact of their results, with Guardiola, his staff and players all due to be back for the visit of Chelsea next Saturday.